Tonight is Burns Night – haggis, tatties and neeps, and drams of single malt should be on the menu. But, it’s not a meal that is easily reproduced here in Greece. Instead, I thought to celebrate the Lowland poet with something British even if it originally comes from a UK county furthest away from the Bard’s homeland.

A hoggan can be described as a pork version of a Cornish Pastie. The name is derived from an old dish of baked pork covered in barley that later took on the more common pastry form. In fact, in the Cornish dialect, hogen (from which hoggan is derived) means pastry – as does oggie (or oggy), a colloquial form of hogen, and a favorite chanting term used at sporting events.

My hoggans were duly made. And, as lovely as Greek cuisine can be, they certainly made a interesting change (or so I thought). S, my Greek helper in the kitchen, watched in fascination as I made them. In the end she simply nodded, having identified them to her satisfaction, and called them Αγγλικά πιτάκια (little English pies). Hmmm…

Hoggan
My individual version of hoggans – without the usual onion and swede (rutabaga) – uses leeks and apples. This makes about 16 individual hoggans, using 11 to 12cm diameter pastry circles and are ideal to freeze before baking. Two per person makes a meal with a salad on the side.

First make the pastry. I’ve modelled mine on Richard Bertinet’s Cornish Pastie dough in his book, Pastry. Take your block of cold margaine directly from the refrigerator and place between sheets of baking parchment. Beat the block with your rolling pin until flattened. Return it to the refrigerator while you assemble the other ingredients.

Measure the flour and add the salt in a wide bowl. Measure the cold water in a separate container and crack the egg and place it in another bowl, making sure these ingredients are readily available. Peel the flattened margarine from the paper and add it to the flour, breaking it up into smaller pieces. Using your thumb and forefinger, flick the margarine pieces and flour together until the margarine is reduced to pieces no larger than your small fingernail. Add the water and egg, mixing and kneading lightly until there is a uniform texture. Wrap the pastry, shaped into a block or disc, in baking parchment and return to the refrigerator to rest for at least 1 hour.

While the pastry is resting, make the filling. Cut any fat and sinew off the meat and dice in very small pieces. Place this in a bowl. Add diced leeks, potatoes, and (peeled and cored) apple as equally small as the meat. Add the mustard, salt and a heafty amount of freshly ground black pepper.

Roll out the pastry to about 2mm thickness and cut into discs about 11 to 12cm diameter.  Spoon on the filling in the centre. Brush beaten egg around the circumference and fold the pastry up over the filling. Beginning with the central point, pinch the edges until it is completely sealed. Fold the pinched edges and pinch a scalloped shape. Brush all over with beaten egg. 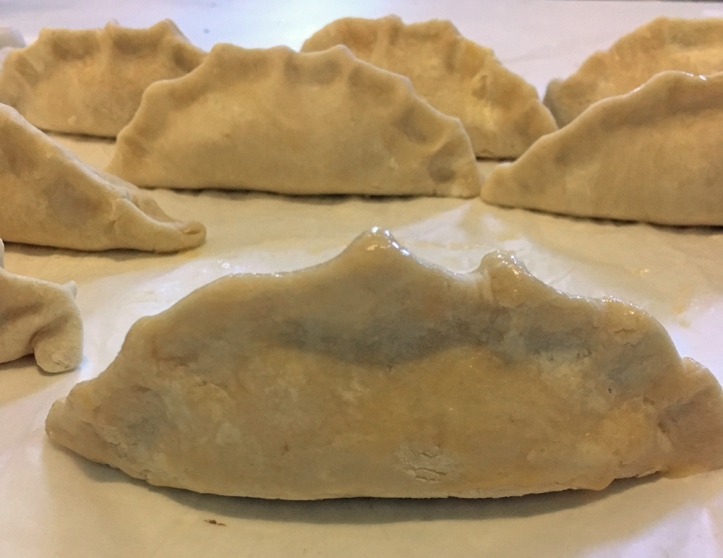 At this point, the hoggans can be baked directly or they can be frozen prior to baking.

Preheat the oven to 180 degrees C. If frozen, defrost completely before baking. Insert a knife in the pastry near the fold to act as a steam vent (it also tests if defrosted). Bake for about 35 minutes until the pastry is golden.

A note on the pastry crimp: some sources say the traditional Cornish crimp is on the side, producing a D-shape, while the top crimp is more typical of the neighbouring county of Dorset. Do whatever crimp style you like as it makes no difference to the taste.