When we were in Thessaloniki last February, little did we know that it would be our last trip for a long time with lockdown, restricted movement, social distancing and altering behaviour due to the pandemic that is raging our world. However, during that long, long-ago, weekend away from Athens, we took the opportunity to visit the famous towers and walls of the old Thessaloniki that remained after the devastating fire of 1917. The original fortifications were Byzantine in date, but had been updated under Ottoman rule. At the East end, at the highest point lies the Eptapyrgio (“Seven Towers”) fortress. In the latter part of the nineteenth century, the fortress was turned into a prison. It continued in operation for about 100 years until 1989-1990 when it was turned over to the Greek Ministry of Culture in recognition of its importance as a Byzantine monument.

The entrance doors to the fort are formidable. It still has that prison feel to it with rusted hinges chains, bolts and locks.

Over the door is an Ottoman inscription, but also embedded in the walls are Byzantine spolia. Spolia are bits and pieces of former buildings or other monuments (such as inscriptions or sculpture) that are re-used in newer construction or building repairs.

The exterior walls are filled with spolia – column drums and capitals, inscriptions, sculpted fragments, stone querns and even a stone niche set on its side.

When you enter through the door to the prison you notice a door within the door – a wicket gate.

Further along the central corridor that divides the interior of the fortress in two are sets of isolation chamber doors. Very grim. On one side was the men’s prison and on the other the women’s. Auxiliary buildings line the further end and a military prison is attached to one side.

The entrance to the military prison is double locked. 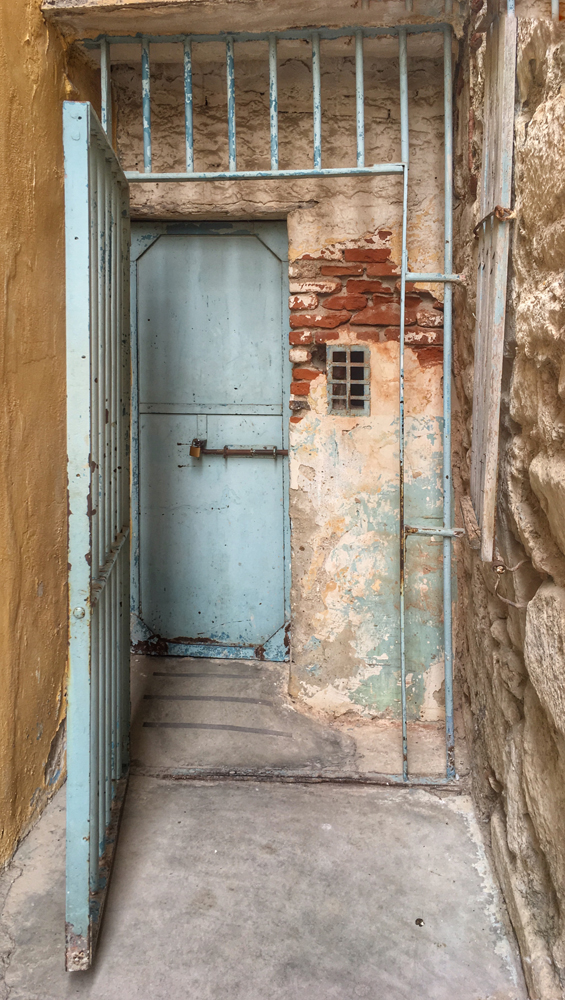 In the auxiliary buildings, there is a door high on the wall

Τhe door is stencilled with Αίθουσα Διδασκαλίας (“Hall of Teaching”). One wonders exactly what kind of “teaching” went on here.

A grilled gateway leads to outside, on the sheer wall of the fortress.

The weather was overcast when we visited which matched the macabre atmosphere of this former prison and the heavy-duty metalwork on the doors served to remind us that they functioned to lock people in. It was almost as if the visit presaged what was to come. A story as promised in first post-lockdown post, Adapting.

Have a look at Norm’s blog, Thursday Doors for more stories of fascinating buildings and their doors.