Plaki (with a difference)

Plaki is a Greek culinary term that refers to a particular method of cooking. It is generally applied to fish (usually white fish – whole, steak or fillet), giant beans (gigantes) or potatoes baked with vegetables in the oven. Those vegetables are commonly tomatoes, onions, garlic, optionally peppers with a few herbs (dried oregano and parsley) added. The vegetables can be fresh – sliced tomatoes, onions and peppers placed on top of the fish. Or they can be a cooked sauce ladled on top or mixed in (as with beans). Sometimes sliced lemons and/or bread crumbs act as toppers. The general recipe is variable, but still conservative in the list of acceptable ingredients.

This method of cooking fish (psari plaki) is particularly simple and ensures that the fish will remain moist in the oven – a good method for the fish cooking novice. I have always found it tricky cooking fish and (still) tend to overcook. This is probably because it was something that I had to learn as an adult – compressed and breaded fish fingers being my only and earliest memories of fish as a child. I don’t think I am unusual in that respect given the reaction that some of our students have when first introduced to the variety of fish available in restaurants in Greece. Fish here is something vastly different from British fish n’ chips.

I enjoy a good traditional psari plaki. However, sometimes I want something with a bit more zing – hence my Plaki with a difference.

Fish Plaki with Herbs, Capers and Olives
I am deviating from the normal Greek plaki practice in introducing more herbs, capers, and olives with the standard vegetables. The method of cooking, however is the same.

First prepare the sauce that will cover the fillets. Rub the peppers with olive oil and roast in the oven (200 degrees C or 400 degrees F) for about 20 to 30 minutes until the skin is blistered and slightly blackened. Put the peppers in a glass bowl and cover with a plastic bag or clingfilm. Let the peppers cool a little, then remove, peel the skin and remove the seeds. Chop the flesh and set aside.

In a large frying pan, heat the olive oil, add the chopped onions and let them cook for a few minutes while they begin to turn transparent and develop golden edges. Add the thinly sliced garlic pieces (having removed the bitter inner core) and stir while these cook. Do not let the garlic burn, but develop a slight golden colour. Add the chopped tomatoes, the reserved peppers, the 4 herb mixture, capers, olives and chopped peperoncini. Turn the heat to low and let it simmer and thicken until it is chunky and most of the liquid has evaporated. Adjust seasoning with salt and pepper. Turn off the heat and prepare your fish. 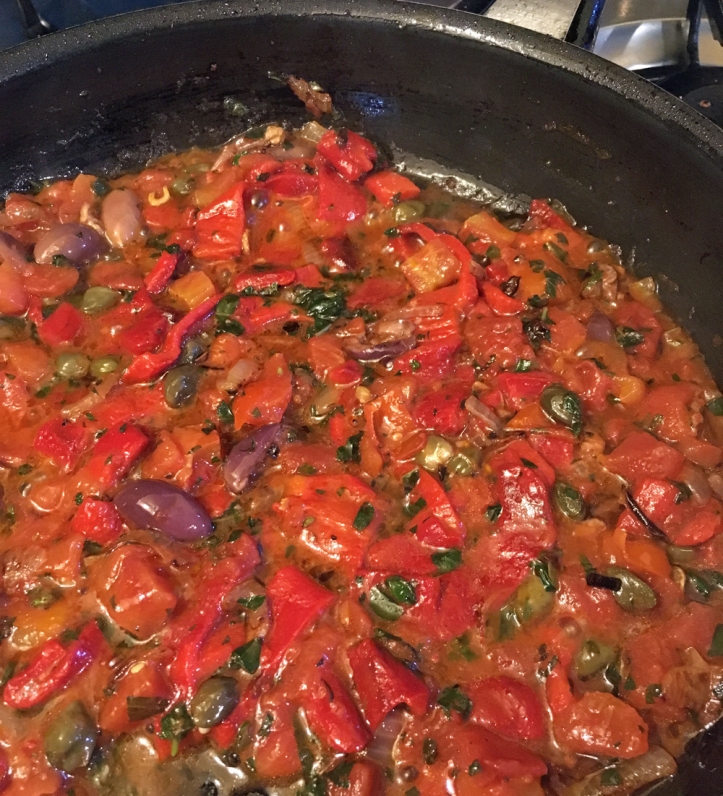 Meanwhile, preheat your oven to 170 degrees C (350 degrees F). Clean your fish and pat it dry. Place the fillets in an oiled oven dish. You might consider lining it with foil which makes it easier to clean the dish. When the sauce has thickened, ladle it over the fish. Thinly slice the lemon and place this on top of the sauce. 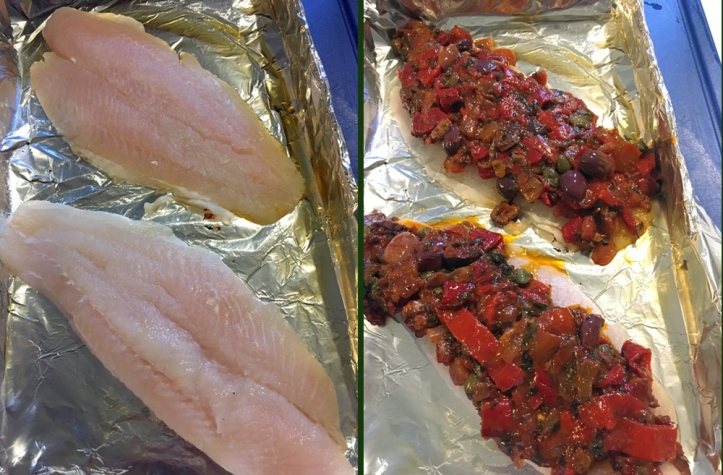 Bake in the oven for 25-35 minutes depending on the thickness of the fillet.

Another way of keeping fish moist is by cooking it in a paper packet or pastry crust. In my first year blogging, I posted a recipe for salmon and spinach in puff pastry – tricks of the trade to ensure moist fish!