Wandering around the Athens Central Fish Market brought home to me that next week marks the final week of Greek Lent – from Palm Sunday through Holy Saturday and Easter Sunday. This is a time when fasting really kicks in. Even those who have been a tiny bit lax until now adopt a Lenten diet during this week. This is particularly true on Good Friday when all recipes using animals that contain blood, animal products such as eggs and dairy, olives and olive oil as well as wine are avoided.

Most fish are also off the menu as they do not meet the “without blood” requirement. Simply put, if it has a backbone, it has blood. So, things like καλαμάρι (squid), Θράψαλα (another kind of squid), σουπιά (inky cuttlefish), μαλάκια (molluscs), χταπόδι (octopus), γαρίδες (shrimp) and many other non-backbone types of seafood are ready to fill the gap. They were prominently on display in the fish stalls – octopus, inky squid, and shrimp. 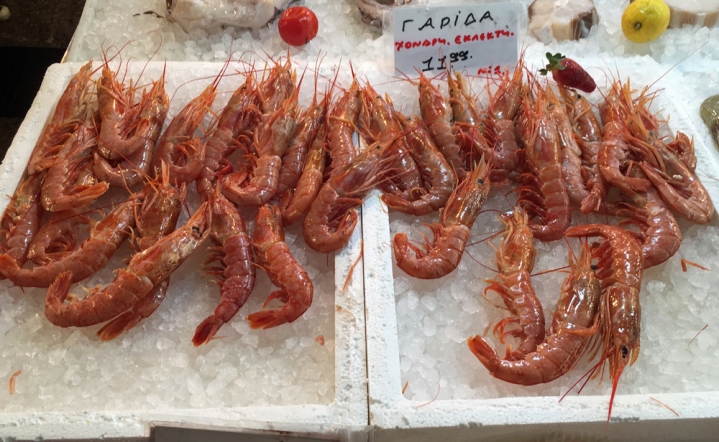 My selection was made, and the thrapsala (Θράψαλα) was bundled into a paper cone. After some rather frustrating attempts with my phone translate app, which kept insisting that thrapsala was crocodile, I gave up until we got home. I have to admit that translating fiasco might have had something to do with juggling my phone (with its tiny keypad) all the while carrying a number of bags in a crowded space. I knew it was squid, but not exactly what kind. The best source for fish and seafood in this area was on the kitchen shelf – Mediterranean Seafood by Alan Davidson. Thrapsala are “flying” squid or Todarodes sagittatus – longer bodies and a wider fin.

Cleaned of its murky interior and the rigid spines removed, it will feature in a squid tagine which I’ve blogged about before when reviewing Paula Wolfert’s wonderful cookbook, The Food of Morocco. This picture below is my first try at making it three years ago. It has featured on our menu (particularly during Lent) ever since.

Does it have a backbone?

A number of years ago, when travelling in Crete during Lent, we stopped at a small country taverna for a pre-dinner drink – a raki (the local firewater) which is always accompanied by a small plate of meze. On the plate were slices of cucumber, bread and small pinkish cubes speared with toothpicks. We queried this, but the answer was that it wasn’t meat, it was spam. A very broad interpretation of the definition of meat, but nonetheless, one that they chose to stick to.

Afterwards, we joked that it was true that spam did not have a backbone. Like shrimp and other crustaceans, it had an exoskeleton. 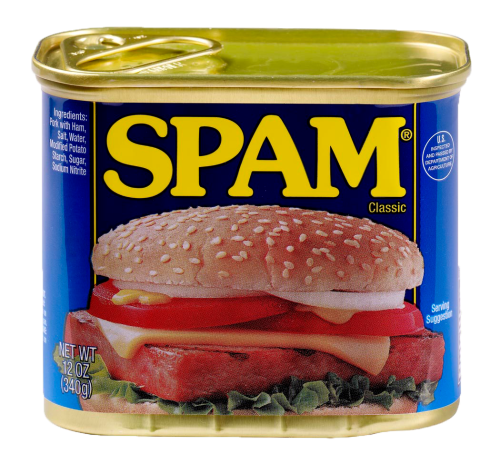 From Wikipedia, under the Creative Commons Attribution-Share Alike 4.0 International license