Here in Greece, New Year (Protochronia, Greek Πρωτοχρονιά) is usually celebrated with a Vasilopita, which literally translates as Basil’s Pita. The latter word, pita, is variously defined as a Pie, Cake or Bread. This particular pita is named after Basil of Caesarea whose Saint’s day is the fist of January. I’ve blogged about this tradition in the past in numerous posts, but more specifically in Bread for Saint Basil which talks about a sweet bread (tsoureki) flavoured with mastic and machlepi. And Divides and Binding Traditions which discusses a variation – a more conventional orange flavoured cake. Both the sweet bread and cake go by the name Vasilopita. Whichever one is made for New Year, it is ceremoniously cut and a lucky person gets the coin that had been tucked inside.

Sweet bread (tsoureki) made for the New Year

However in the region of Epirus, there is a tradition of serving a meat pie (kreatopita) as a new year’s Vasilopita, savoury rather than sweet. This not so surprising as the northern region of Epirus, home to many shepherding and agricultural communities, is famous for its pitas (pies). 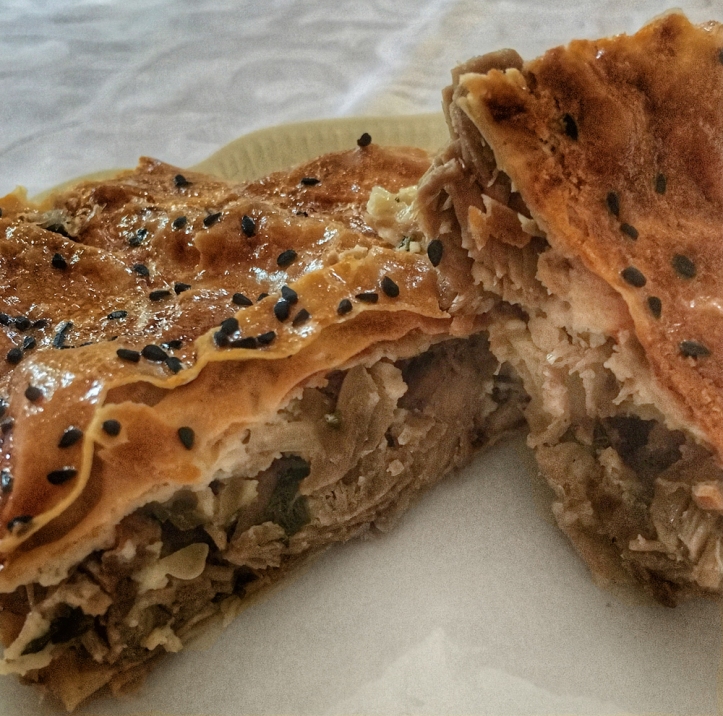 Meat Pie from Epirus
This is my variation on a festive pita from Ioannina, the main city of the region, derived from a description in Diane Kochilas’ book The Glorious Foods of Greece.

Prepare your filling by cutting and shredding the lamb and setting it aside. I used meat leftover from a roast leg of lamb, but you can use a shoulder or even lamb meat cut for stews that are either roasted or boiled before making this pie. Finely chop the onion. In a large pan, heat the olive oil and sauté the chopped onion until translucent. Add the pine nuts and the raisins and let them sauté for a few minutes until the nuts begin to get golden, then add the cooked meat. Pour on the stock and add the cinnamon stick. Partly cover and let the meat mixture simmer on low until the liquid is almost all absorbed – about 20 minutes to half an hour. Adjust with salt and pepper and fold in the chopped parsley. When the mixture is cool, remove the cinnamon stick and discard.

Make the béchamel by heating the butter in a separate pan, then adding the flour. Stir until the flour has been completely covered in the butter. Slowly add the milk and whisk to prevent clumps. When the milk begins to thicken, add the grated nutmeg and then whisk in the eggs, one at a time. Turn off heat. The béchamel should not be too thick, but thin enough to be able to be poured.

To prepare the pie, oil a casserole (a tapsi) approximately 25 x 33cm (about 10 x 13 inches). There are different types of phyllo – the thick homemade type, a slightly thicker commercial one used primarily for pitas and a very fine thin one that is mostly used for sweets like baklava. Brush each layer of phyllo with a combination of melted butter and oil between the layers. For homemade phyllo 1 to 2 sheets thick for the bottom, 3 sheets for the slightly thicker commercial phyllo and 4 sheets for the thin phyllo. Make sure the phyllo overlaps the side of the casserole. Layer in the meat. Then spoon the béchamel evenly over top, lightly shaking so the sauce blends down into the meat. Place the phyllo over top (1 sheet of homemade, 3 thicker commercial or 3 to 4 of the thinner variety), again brushing butter and oil between the sheets. The filling should only be about 1cm thick. To close the pie, brush the edges with more butter/oil and roll the ends up to the edge of the casserole and tuck in slightly. Lightly score the top into serving pieces making sure you do not cut all the way through the dough into the filling. Brush the remaining butter and oil mixture (there should be very little left)all over the top of the pie and sprinkle with nigella seeds.

Bake for about 40 to 45 minutes. Remove from heat and let it sit for about half an hour before cutting and serving.

Note: Meat pies as Vasilopitas are also common in other northern areas of Greece. But, a kreatopita is not just for New Year and is often made year round. I have seen numerous variations on meat pies, many of them using lean minced (ground) beef, some with meat in tomato sauces, others with dried fruits (such as prunes), and some, like the one above, with the addition of béchamel. Kreatopita is not just one recipe. There are any number of traditional regional variations as well as innovative new creations. What they have in common is beef/veal or lamb, that is red meats which are defined as kreas (Greek κρέας) encased in pastry. Chicken pies – kotopita, Greek κοτόπιτα – or pork pies – hirinopita, Greek χοιρινόπιτα – are different things altogether, but some communities or families will make a kotopita or a hirinopita for the New Year’s celebrations. And, again, there are numerous variations, made year-round. There are no hard and fast rules.