In the old part of the main town on the Greek Cycladic Island of Naxos is a the fortified hilltop known as the Kastro (castle). Here there are carved stone door surrounds that date to its foundation in the 13th century. The original wooden doors may have rotted, but the stone endures. These were gateways to mansions of Venetian settlers. In fact, some of the houses are still inhabited by notable families that can trace their ancestry back in time to the medieval Duchy of Naxos. The Duchy was created around 1214 by Marco Sanudo, nephew of the Venetian doge. This was a time when the Byzantine Empire was being partitioned as a direct consequence of the 4th crusade and the sacking of Constantinople. The Duchy later extended beyond Naxos to include all of the Cycladic Islands and became known as the Duchy of the Archipelago. One door surround below has Venetian period carved stone emblems. 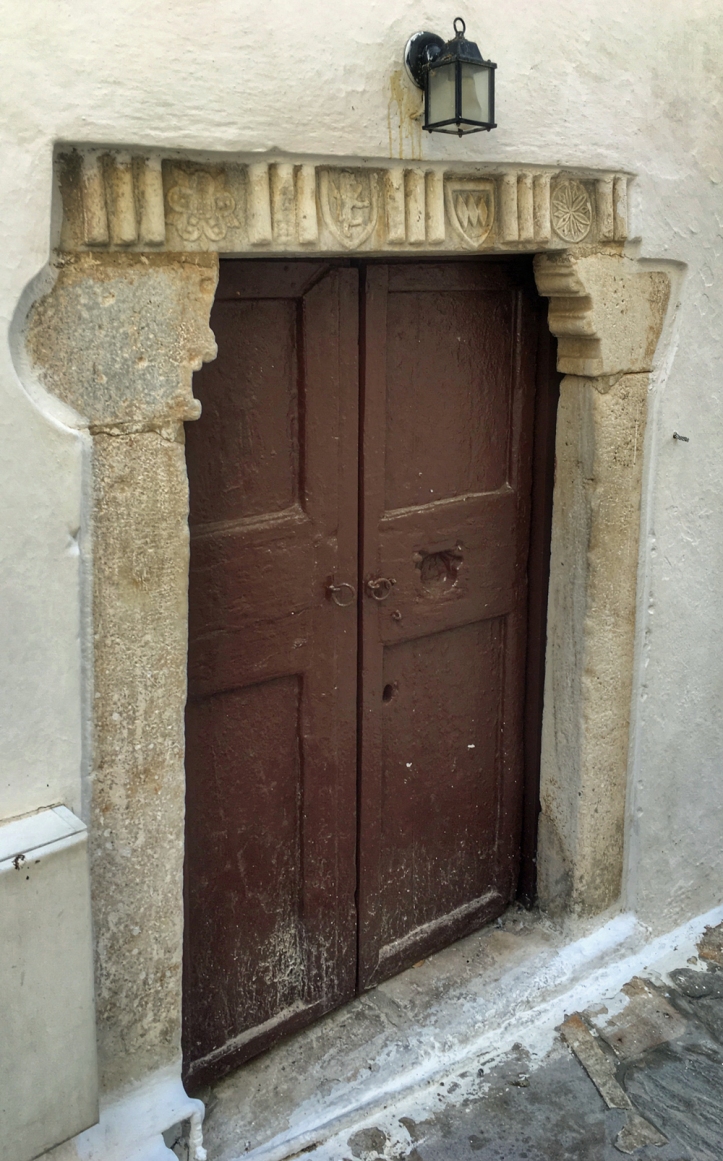 These emblems over the door are said to mark the union (in marriage) of two prominent Naxian families: the centre two emblems denote the Orthodox Mavregeris family (left crest) and the Catholic Crispi family (the right crest). The latter family counted a number of Dukes of Naxos in the family tree.

The building that now houses the Archaeological Museum was once the palace of the Dukes of Naxos. A Venetian plaque depicting a house is now part of the museum’s collection. It is sadly unlabeled, so one can only speculate that it might once have been mounted above a door to a family mansion. On the plaque, the crenelated house is enclosed in a wall. The house has two doors – the larger arched one has an eye over it – perhaps a Greek mati, a protecive charm – and the other has illegible marks that might possibly represent emblems. A hand reaches out from an upper window and holds a burning torch towards a rampant stag. Whatever the symbolism might represent, it is a nice illustration of a Naxian Venetian house. 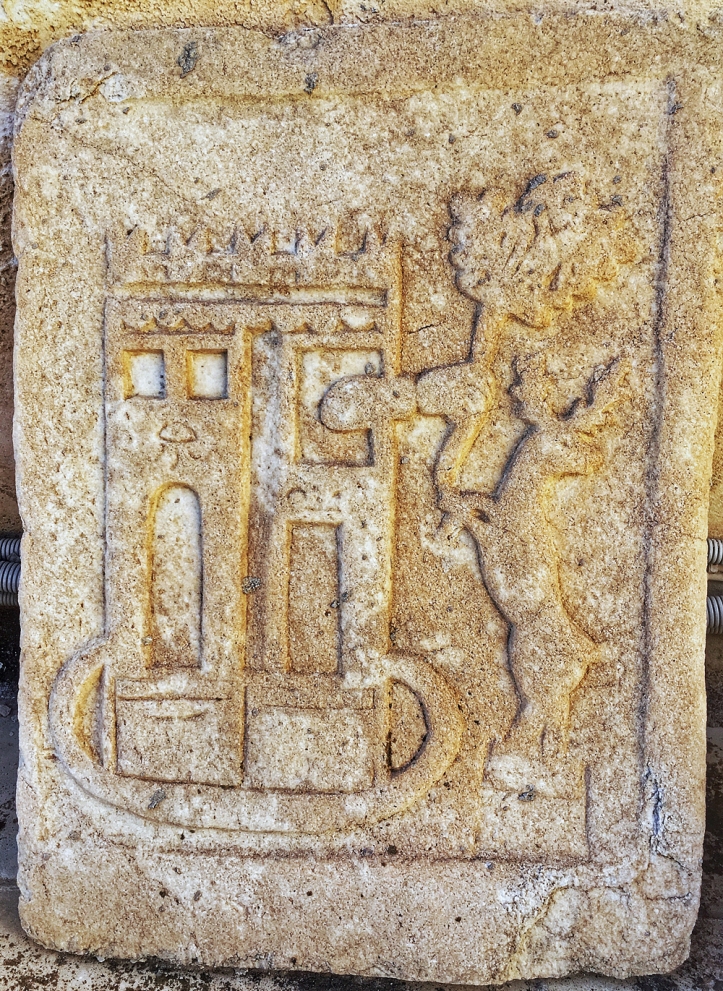 By the 16th century and continuing until the early 19th century, the Duchy became part of the Ottoman Empire, although it retained special privileges that extended to autonomous government and religious freedoms. During this time, the Ducal palace became the Jesuit Commercial and Maritime Trade School which was established in 1627. Evidence of the school can be seen in the door with the Christogram IHS carved in stone above the lintel. 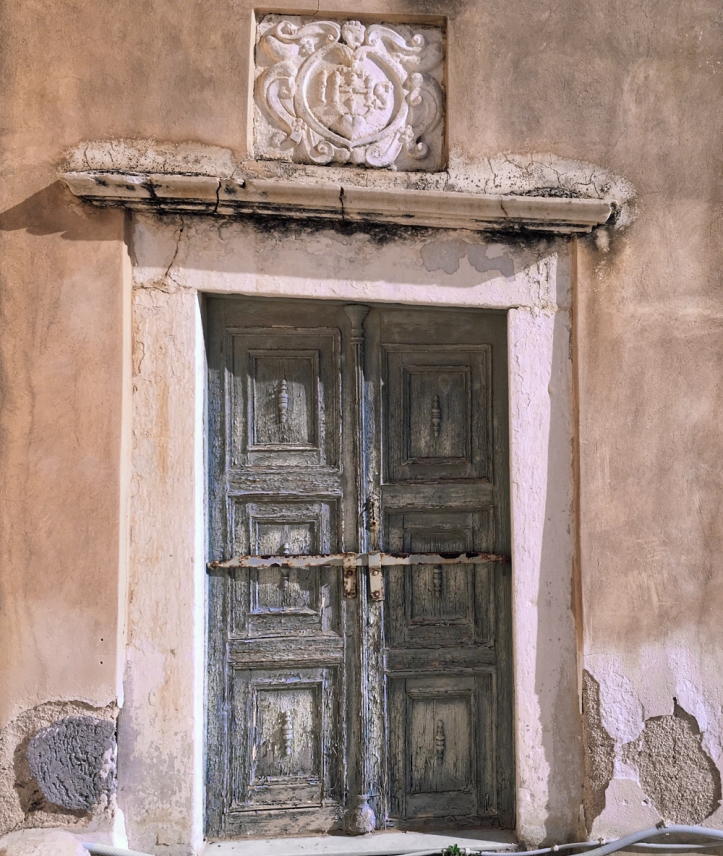 Not much Ottoman influence can be detected in the structures on the island during their rule, but other influences can be seen. Another door from this period has a carved stone surround with several “trees of life” and rosettes – typical Greek motifs. A possible date of 1785 is just recognizable, so it is not surprising to see a neo-Classical style pediment at the top of the door, an architectural style popular in the west at this time. The pediment is now lacking its decoration – if it ever had one. The rickety wooden slat door is a much later addition. 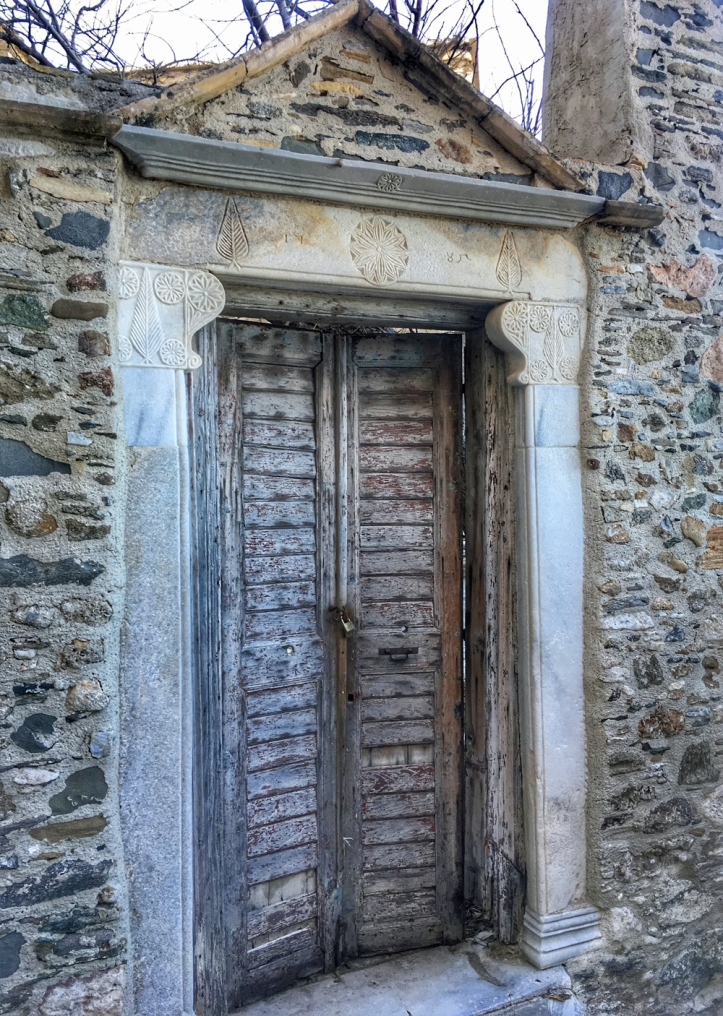 Naxos joined the Greek nation state in 1832 and some of the door decorations around the Kastro may date to the 19th or 20th century. These include interesting door knockers. The most common door knocker, still popular today, is based on the “Hand of Fatima” thought to protect the house… 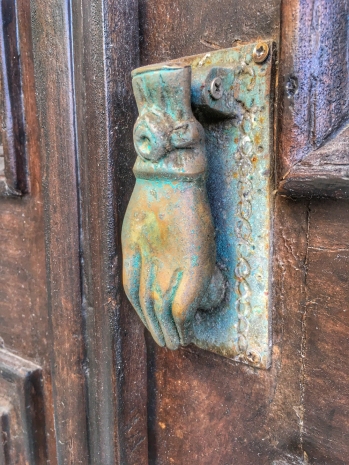 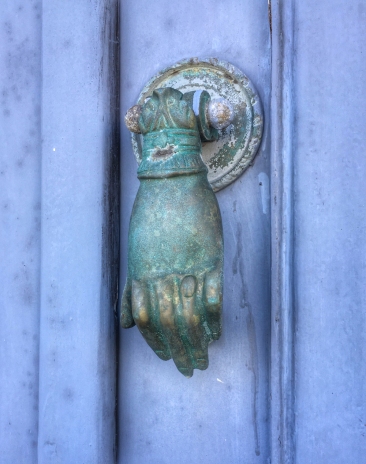 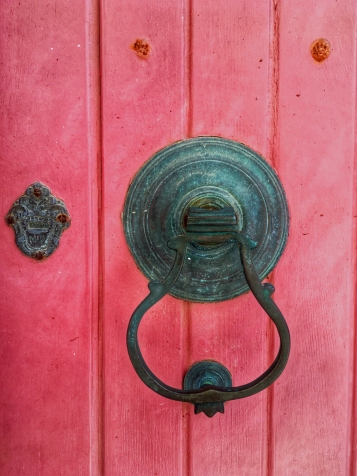 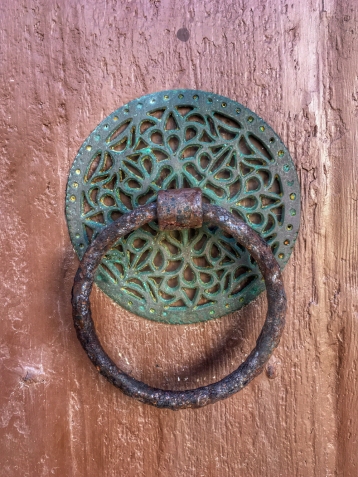 Some door knockers are different and include a brass Maltese Cross with verdigris on a deep red painted door – perfectly complimentary colours. 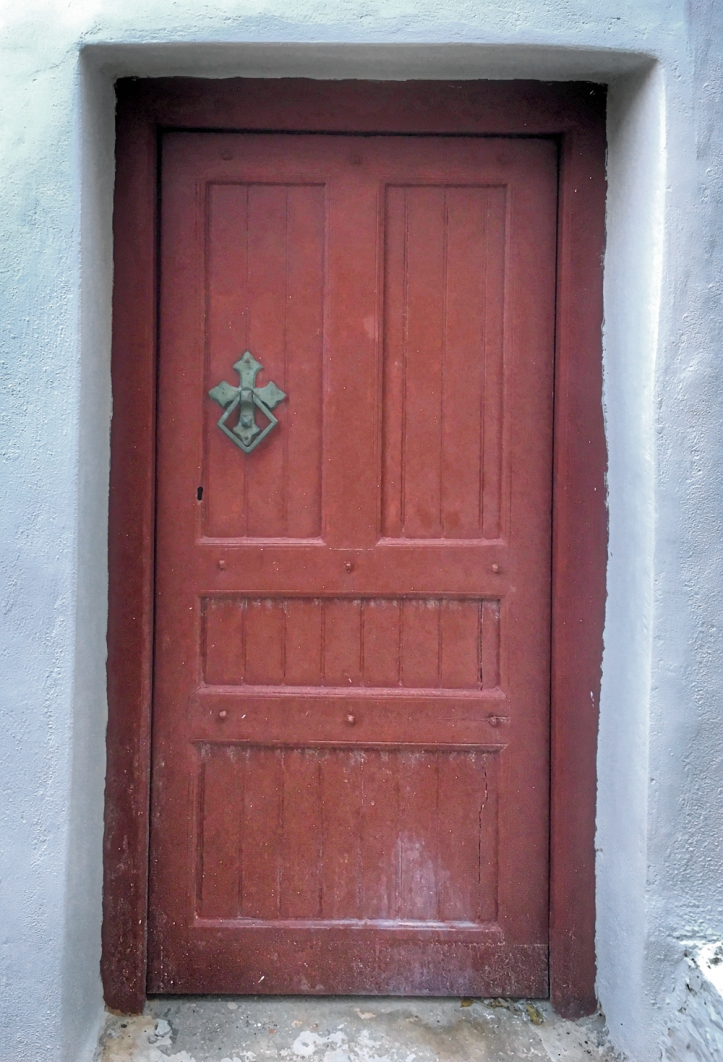 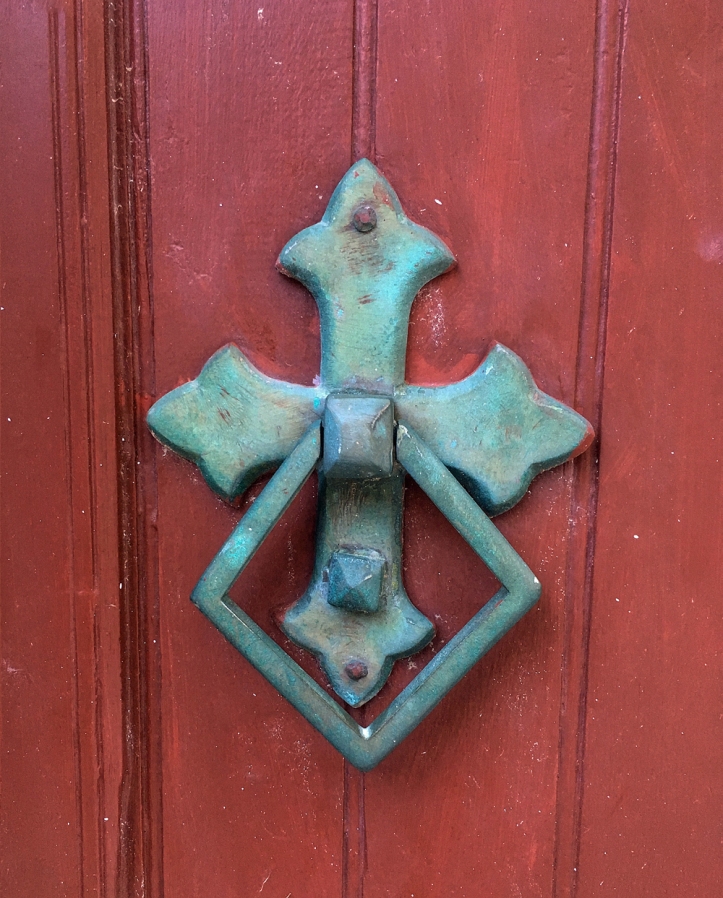 Or another is a stately door sporting an lady’s head, based on an older British Georgian design. The head is mottled with patina and rust, showing that it is a mass produced cast iron copy with a brass finish. 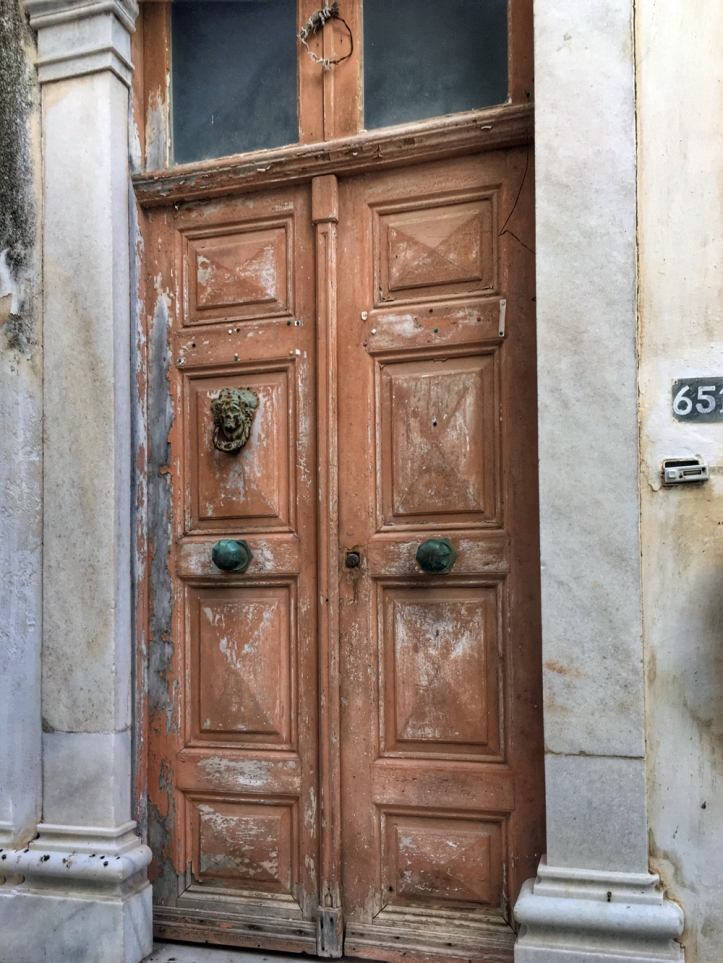 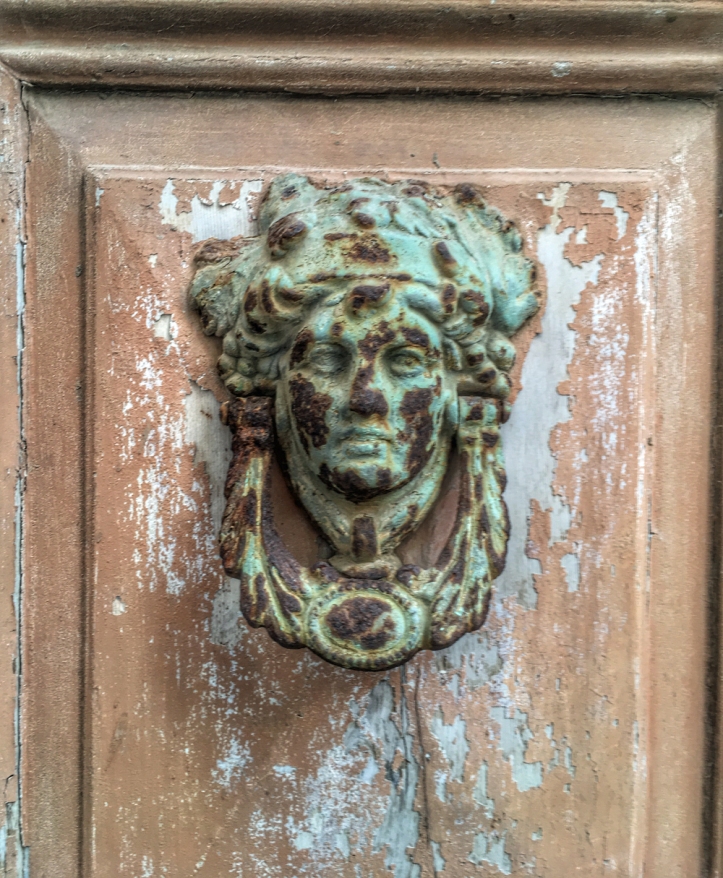 History can be traced through tangible things: cultural interactions through style, family histories through emblematic markers, clues seen in dates and religious symbols. In fact, the ability to read the past from the material remains left behind is the rational behind the object-oriented study of archaeology. Here in the Naxos Kastro I’ve attempted to apply this principle to its doors, their surrounds and accoutrements. These traces (if you forgive the bad pun) are doors into the story of the island’s history.

Also see Doors of Naxos Old Town with its general view of the fortified Kastro and more of its doors.

Check out Norm’s Thursday Doors for many more posts on fascinating buildings and their doors.