A year or so ago, I noticed an appeal for a crowdfunding venture to record the culinary life of legendary food writer Paula Wolfert from a series of interviews of the cook herself. The timing was crutial since Wolfert had been diagnosed with dementia in 2013 and time and memory were passing. In a very short time, more than a 1,112 people responded that made the project possible. The resulting book is appropriately titled: Unforgettable.

Biographies are generally organized chronologically, and this one is no exception. But, unlike most, Paula’s life is also told through recipes that are listed after major sections. The first chapter shows us her early “middle American” life in the 1940s, fairly devoid of any interesting food. Her significant culinary influence at this point came from her grandparents who had emigrated to the US from the Balkans. Recipes here are inspired from her childhood favourites and include one for ajvar, which is very similar to the red pepper ajvar recipe I learned from a Croatian friend, and ćevapčići, Balkan kofte kebab-like sausages.

Before there were hippies, there were beatniks – the 1950s youthful alternative culture that challenged the status quo of conservative America. These were Paula’s colleges years in New York City. It was here that she met and married Michael Wolfert, a fellow beatnik renegade. At this point in her life, Paula was just beginning to teach herself how to cook – initially with disastrous results. First under the tutelage of Dione Lucas, a precursor to Julia Child, and later James Beard. It was with Beard’s assistance that Paula became a professional cook, a career that would cease almost as soon as it began. This era is reflected in Paula’s fledgling food explorations, rich with spices and velvety sauces including Sizzling Shrimp with Garlic and Pimentón that she once served to the Beat poet and novelist Jack Kerouac – one of the recipes at the end of this chapter.

In 1959, Paula and her husband burnt their bridges and moved to Morocco. This was a place where the Beat scene could be found in a vibrant expat community. However, the drugs, sex and other excesses of the Tangier Beat scene (which Michael had embraced) soon caused tension in their marriage. Michael departed for Paris and after a brief hiatus, Paula reunited with him. While living in France, they had two children, but eventually divorced in the late 1960s when Paula and the children returned to New York. Back in the US, Paula began searching for how to support herself and the children. It was then that she began her food writing career, starting with a short-lived and innovative scheme called “Party Boxes”. These boxes contained everything that would enable a home cook to throw a party based on a variety of international cuisines. A number of elements such as sourcing ingredients and the cultual history of the food for Party Boxes would become part of the writing style in her later cookbooks. One of Paula’s contributions to the Party Boxes was on Indonesian cuisine and the recipes that follow this “questing” period of her life are from that party box: Satay and Spicy Peanut Sauce.

Also at this time, and at the suggestion of her new partner, Bill Bayer (filmmaker, photographer and author), she drafted the outline for a book on Moroccan food that would become her best selling book, Couscous and other good foods from Morocco. With the advance from her publisher, Paula began the intensive research for her book in Morocco. This involved travelling throughout the country and studying with local cooks, particularly Madame Jaidi who was to be the inspiration for many of the recipes in Couscous. In the autumn of 1972, the family moved to Tangier – a stay that would last three years. From what Paula says in the biography, the three years in Tangier were some of the happiest of her life. Naturally, the chapter ends with recipes for a Moroccan feast – including several for couscous. During this time, Paula travelled to various parts of the Mediterranean and collected enough recipes for a second book, Mediterranean Cooking, which included a Spanish variation on the Sizzling Shrimp in Garlic Sauce she once served to Jack Kerouac and the ajvar of her youth.

With the success of Couscous and Mediterranean Cooking behind her, Paula (now living back in New York), branched out into serious food journalism, teaching cooking and restaurant consulting. Having excelled in this arena, she then headed to France to highlight the regional food of Gascony. Here she repeated the method of recipe collection by living among the cooks of the region, learning from them exactly how things were done, and garnering stories that went with the recipes. The result was another successful cookbook, The Cooking of South-West France. Naturally, the recipes at the end of this section are from that region including cassoulet, duck confit and prunes in Armagnac. From there she widened her look to the whole Mediterranean, producing her least successful book, Paula Wolfert’s World of Food that lacked the special sense of place and stories contained in her pervious works.

In the late 1980s, she began researching for The Cooking of the Eastern Mediterranean. She regained her focus with this book, exploring pantry ingredients of the Eastern Mediterranean in what effectively became an epic journey following the “pepper trail” in northern Greece, FYROM, Turkey, Georgia, Syria and the Levantine coast. In Greece she was joined by the Greek food writer Aglaia Kremezi, whose fabulous book, The Mediterranean Pantry, I posted on a while ago, beginning a long friendship between the two women. Once again, Paula met with and learned from local cooks, gathering stories and recipes. Although this book did not have an instant success of her first two books, the biographer, Emily Kaiser Thelin, looks back and reflects that this book had a strong affect on the emerging food scene in the United States. The book highlighted vegetables over meat, and introduced ingredients such as Aleppo peppers and pomegranate molasses which would later become household staples. Recipes for an Eastern Mediterranean Meze spread follow this section.

Her next books, Mediterranean Grains and Greens, The Slow Mediterranean Kitchen and Clay Pot Cooking are the focus for the next three chapters. They represent the next stage of her life back in the US, briefly on the east coast and then in California. She still travelled to the Mediterranean, collecting recipes and stories, indulging in her new passions for foraging and slow cooking (encouraged by the Slow Food movement). Later, just before the Alzheimer’s was diagnosed, she focused on another passion – clay cooking pots. The recipes that follow each of these chapters come from these three books.

Paula’s husband Bill accurately summed up her style of cookbook writing on regional foods, each stressing “its cuisine, its lore, with a strong sense of place and personality based on extensive research in the field and good solid recipe writing and testing at home.” I think of her an a culinary anthropologist of an area of the world I am at home in. For me, it is her focus on place and stories that make the recipes come alive and are what make Paula Wolfert’s books special. Of course, the recipes work, too. This biography, built from interviews and cooking sessions with Paula, is a one of a kind – her own story to accompany her recipes. It was not surprising that so many people helped with the crowdfunding venture to make sure Paula’s story will not be forgotten.

Postscript: Two biographies of Cooks who changed the way we perceive Mediterranean food were published this year (2017) – the first about Patience Gray (see my post A Visionary Cook) and this one about Paula Wolfert. On the surface, the two food writers appear to have nothing in common, belonging to two different cultures (one was British the other American) and from different generations and backgrounds (1930s avant guard artistic milieu with an Edwardian upbringing versus 1950s beatnik with a middle class suburban origins). And, according to the author of Patience Gray’s biography, Feasting and Fasting, they only once crossed paths, but it was clear from the encounter that Paula and Patience would not have been simpatico. Yet, they were both free spirits who shared a love of food and place. Both books worth a read. 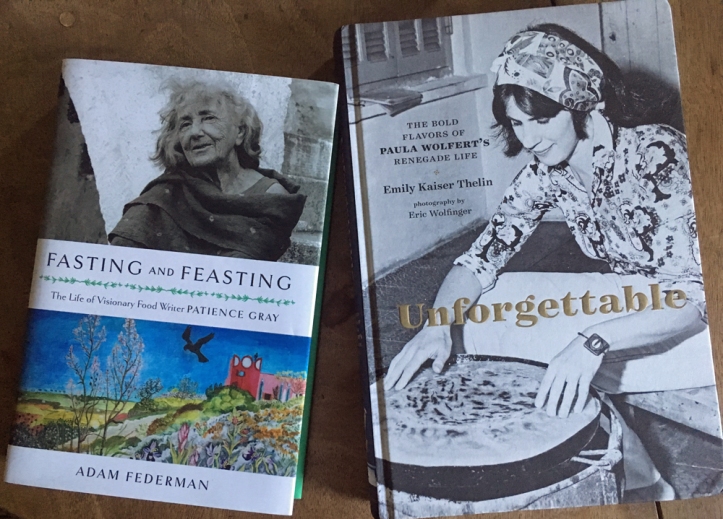