The Doors of Trinity Lane

If the number of camera-toting tourists wandering the university town of Cambridge is any indication, the medieval colleges must be some of the most photographed buildings in England. Less photographed, however, are the other sides, the enclosing fortress style walls, the lesser entrances, rather than their more famous façades. These are usually accessed along narrow lanes, the least traversed by tourists.

Trinity Lane is one such narrow lane. It leads off Trinity Street with the walls of Trinity College on the right side and those of Gonville and Caius College on the left. Although it is open to cars (or service vans), it mainly sees pedestrian or bicycle traffic.

Half way along the lane, it makes a 90 degree curve. At the actual angle of the curve is a quite spectacular doorway. This is a rather grandiose back entrance – a postern gate – known as Nevile’s Gate into Trinity College. It has the Royal coat of arms above with a shield between the lion and the unicorn. The gate doors themselves are quite functional and not ornate. Notice a person size door within the door – called a wicket gate. 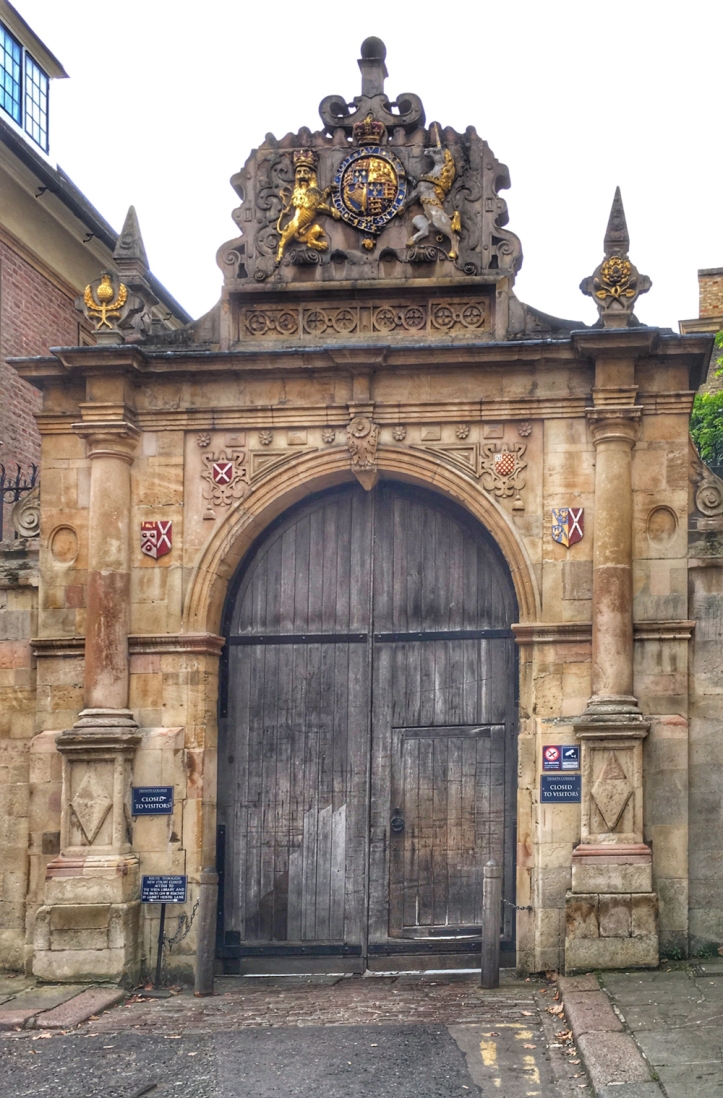 Just to the right of Nevile’s Gate are a pair of huge studded doors that look robust enough to withstand a siege. They open onto a tunnel through thick walls directly into Trinity’s Great Court. The doors are large enough for a tank to drive through (if you could get a tank down the narrow lane). You can just detect a concealed door cut into the lower right side. 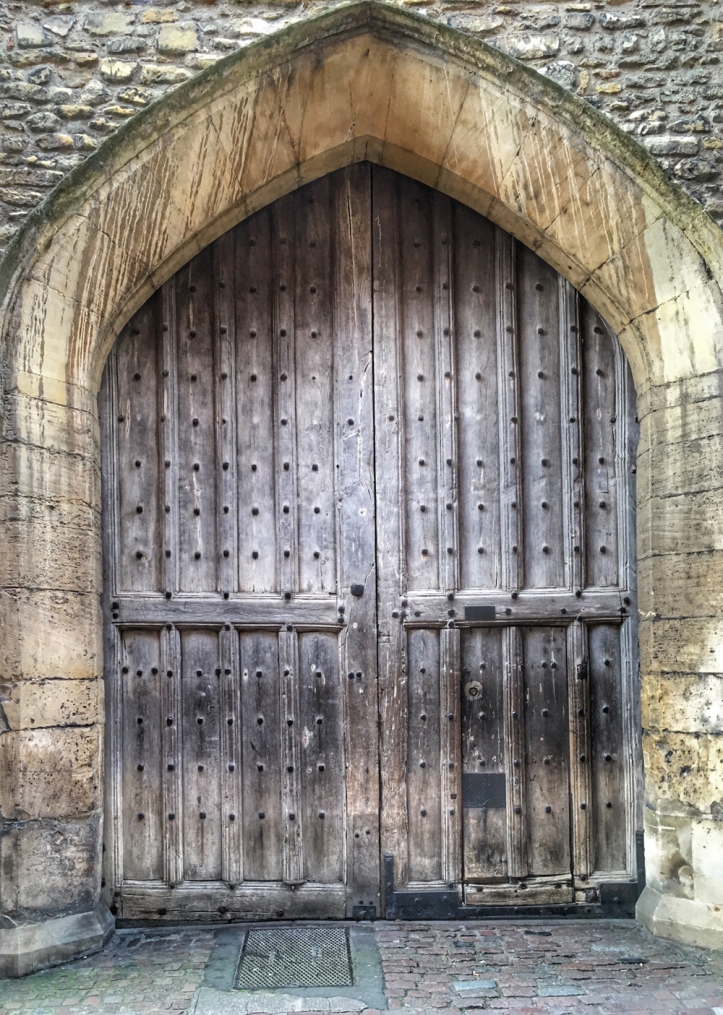 Around the corner is the modest door at number 1 Trinity Lane. This is the rear entrance to the residence of the Master of Gonville and Caius College – The Master’s Lodge, as the discrete bronze plaque to the side indicates.

The lane continues, joining Senate House Passage. At the junction is a grand looking Victorian college garage. Note the date of 1883 above the doors. It must have once been a stables. 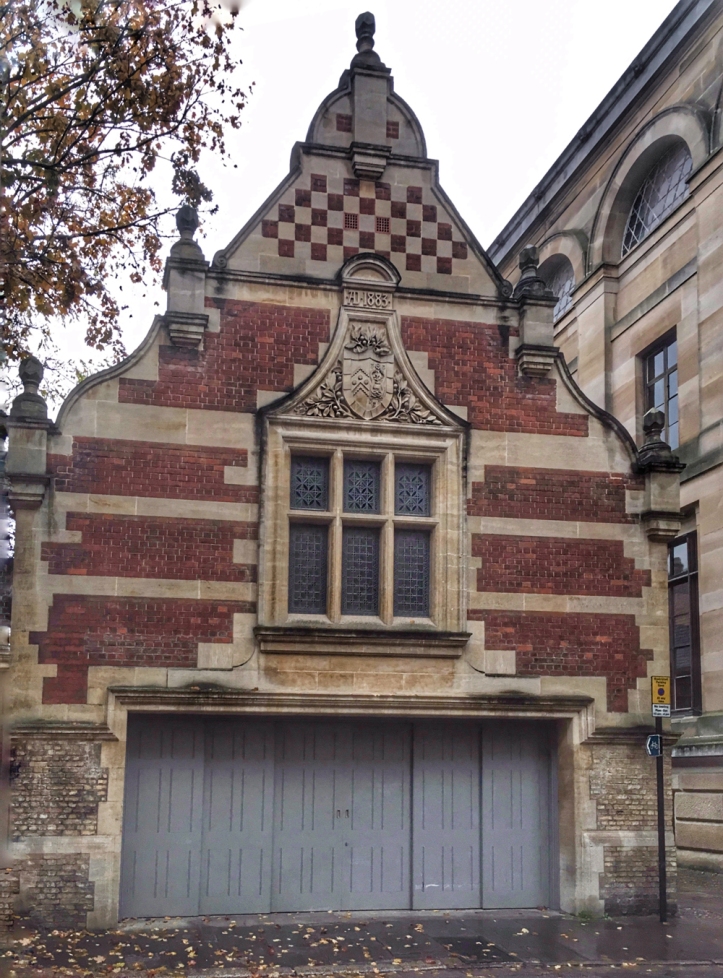 Senate House Passage is an even narrower pedestrian way that leads you back to Trinity Street. Below is a view of Gonville and Caius College clock tower on Senate House Passage looking towards Trinity Lane and the garage on the right corner where the cyclist is turning.

But, further on Trinity Lane just beyond Senate House Passage is the entrance to Cambridge’s Old Schools building, the administrative centre of the University. It is a good example of gothic architecture – a cathedral to education. 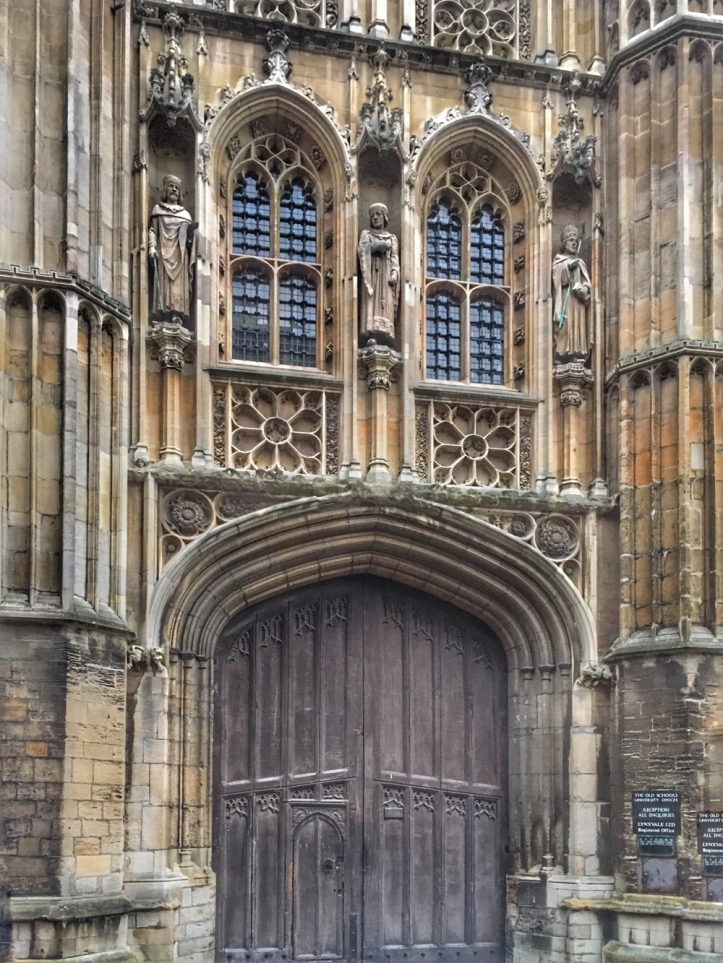 The little wicket gate set within the large door is a work of woodworking art. I wonder if it could possibly date to the 15th century when the older part of the building was first constructed.

Further, the lane passes the walls of Trinity Hall with its minor door to the South Court (first photo below) and Clare College, eventually terminating at Kings College Chapel with a pathway to the side door of the ante-chapel (second photo below).

It is worth exploring little lanes. You never know where they might take you, but, if in Cambridge, take an umbrella. It can start raining at any time.

Check out Norm’s Thursday Doors for many more posts on fascinating buildings and their doors.