A little while ago, flying to Thessaloniki from Athens, I saw an article in Aegean Airline’s inflight magazine on Greek Charcuterie. More specifically, the article focused on cured pork products from the Cyclades. Names like loza (or its variations, lonza, lozza or louza), bouboulo (or noumboulo) and apochti (or apaki) are Greek regional variations of cured pork, terms traced to Italian or Byzantine roots. The cut of meat and processing differ from place to place. Differences in processing are due in part to local traditions and availability of herbs and spices that are used in the curing. 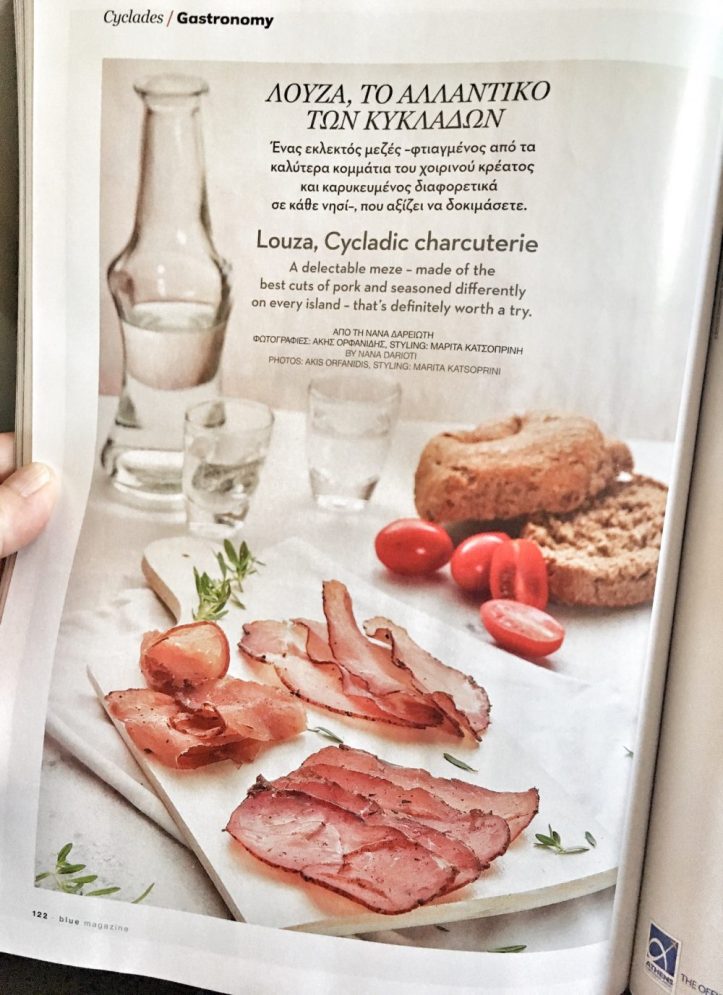 It was an interesting read, a brief interlude during the 30 minute flight. However, it stuck with me when we returned to Athens, so I began a little bit of research on the world of smoky, salty, herby, dried or vinegar cured Greek hams. 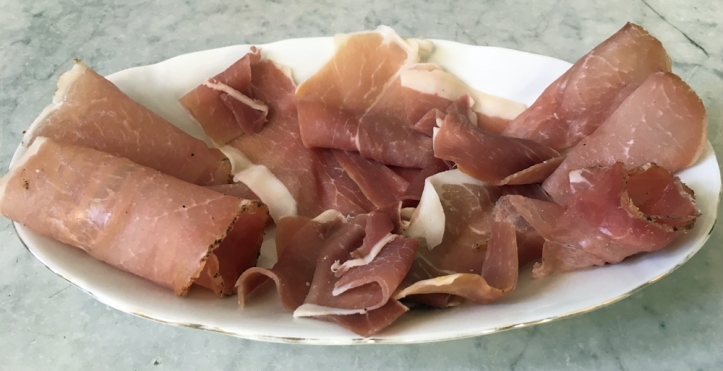 Etymologically, some terms are derived from Italian lonza/lonzino, which means “loin”. Venetian nombolo/ombolo means “a strand of rope”, which I am guessing is a visual simile of a tenderloin. It is not a coincidence that terms derived from the Italian are used in areas where the long tenderloin or centre cut loin are often the cut chosen to be cured. Loza (or its variations) appears on the Cycladic islands like Tinos, Kea, Andros, Serifos, Sikinos and Syros. The Ionian island Corfu uses noumboulo and the Cycladic island of Mykonos uses bouboulo. This, of course, can be explained by the presence of the ship-going powers of Venice and other Italian principalities such as Genoa in Greek history.

Even older, the terms apochti and apaki used repspectively on Santorini and Crete are derived from Byzantine apoktin, a dry cured meat. According to some histories of Greek food, Byzantine apoktin is considered a delicacy, generally made with pork. Within the Byzantine culinary tradition various other meats were cured – goat (including billy goat and wild goat), sheep, and even various fish and cuttlefish. Ilias Anagnostakis in an article in his 2013 edited book, Flavours & Delights: Tastes & Pleasures of Ancient & Byzantine Cuisine, mentions that apoktin is only one of many Byzantine terms used for cured or processed meats – paston/tarichon, lardos/lardin, apoktin/apakin, paspalia, syglenon…. 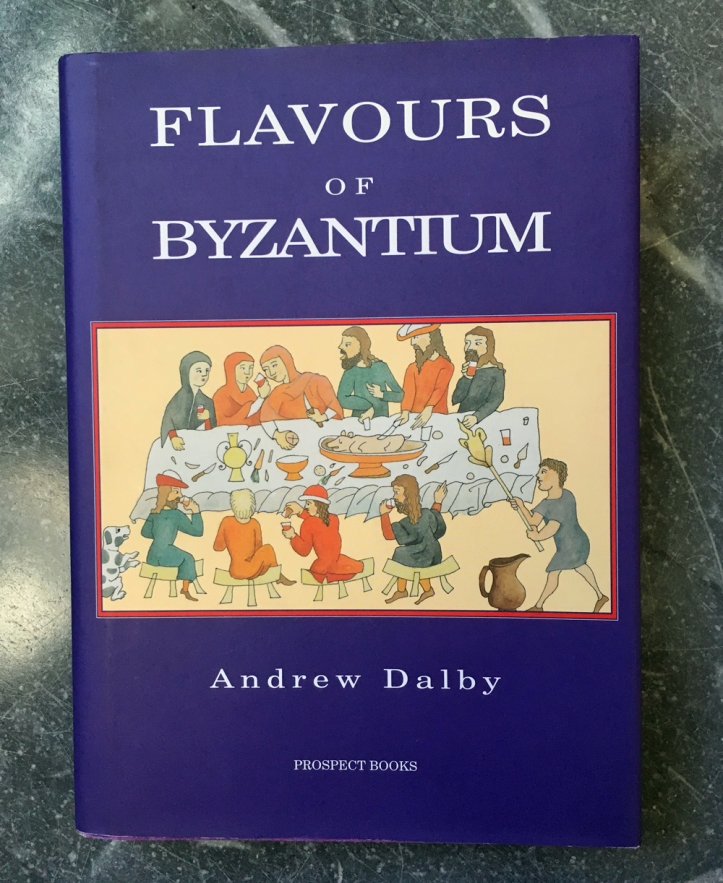 Andrew Dalby, in Flavours of Byzantium (Prospect Books 2003), mentions that the word apoktin occurs rarely in the Byzantine literature. Surprisingly, he does not discuss any of the other cured meat terms listed by Anagnostakis with the exception of a vague reference to the forerunner of Turkish pastirma (Greek pastorma), possibly derived from that Byzantine word, paston. Pastorma is a commonly found dry cured meat here in Greece, immediately identifiable by its coating of a dried herby paste. It is generally made from beef, but traditionally made from camel. On the Dodecanese island of Karpathos, they make pastorma from wild goat. It is quite likely related etymologically to pastrami, that favourite sliced meat of New York delis. But, pastorma is another story, a worthy subject of its own post.

Dalby also provides a description of curing reported by Diane Kochilas in The Glorious Foods of Greece for Santorini apokti. Kochilas, in turn, discusses charcuterie and other preserved foods in the 10 different regions covered in her book, mostly pork products, but also various forms of preserved sausages (yet another story) and salted/smoked fish (ditto). Many more words – some variations on pastorma – and processes are employed, including a prosciutto-like ham – akrokolion – from the Central Greece and another similar cured product from the Ionian island of Zakynthos. 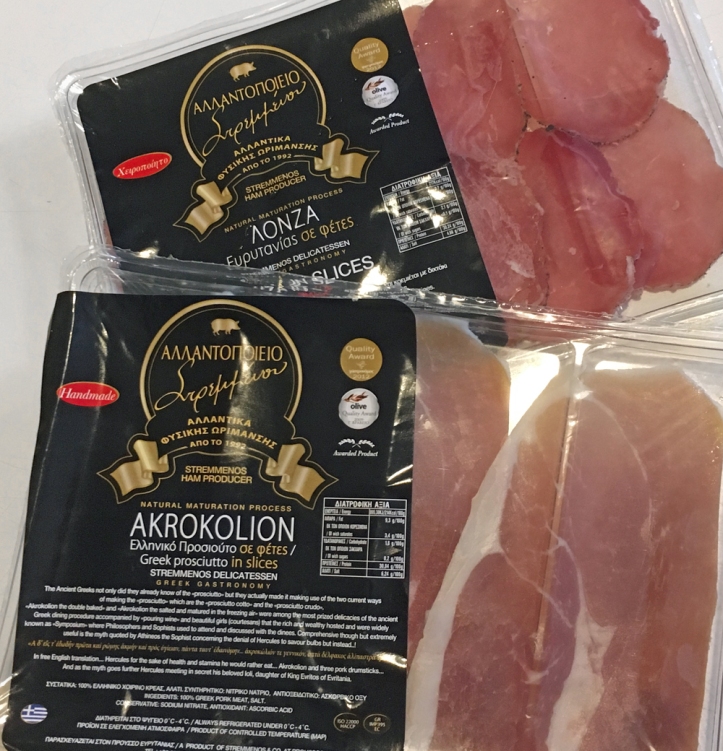 All of this shows that there is a rich and varied tradition of curing pork (and other meats and fish) in Greece. Some of these traditions date back to Byzantine times and perhaps earlier since much of Byzantine cuisine is ultimately based on ancient (Greek and Roman) traditions. Today, most of these charcuterie products do not travel, so they are less well known outside their regions. However, we are lucky here in Athens with an number of superb delis and specialty sections of supermarkets where some of these delicacies can be found.