The Greek region of Prespa in Western Macedonia is dominated by two lakes (Small Prespa and Large Prespa) surrounded by spectacular mountains. The bodies of water are separated by a flat isthmus. In the middle of the larger lake, the watery boundary lines of Greece, Albania and FYROM meet. 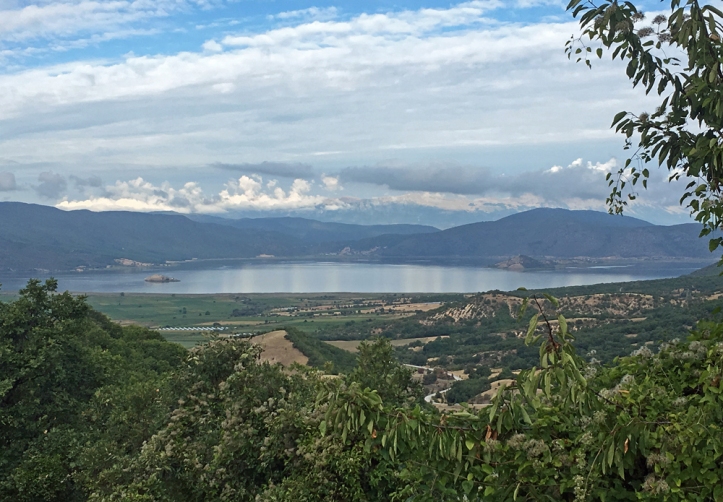 A view of Small Prespa and its agricultural land around as we begin the descent from the surrounding hills.

Gracing the smaller lake are two islands – one of which is famous for the 10th century basilica of Ayios Achillios for which the island is named. This island is reached by a pontoon foot bridge from the isthmus. 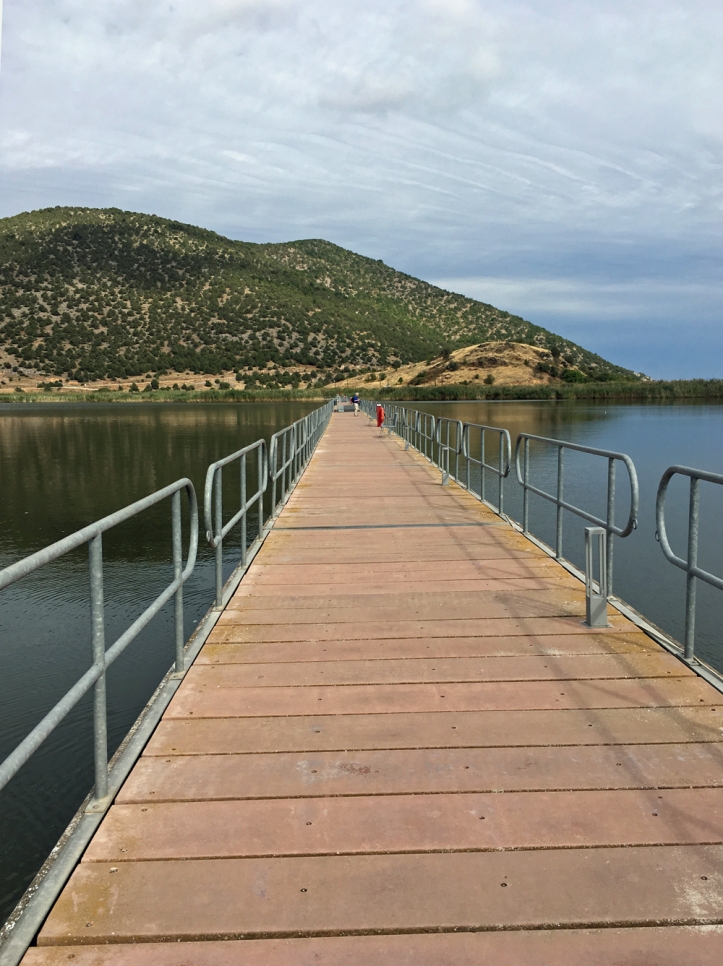 The floating footbridge to the island. 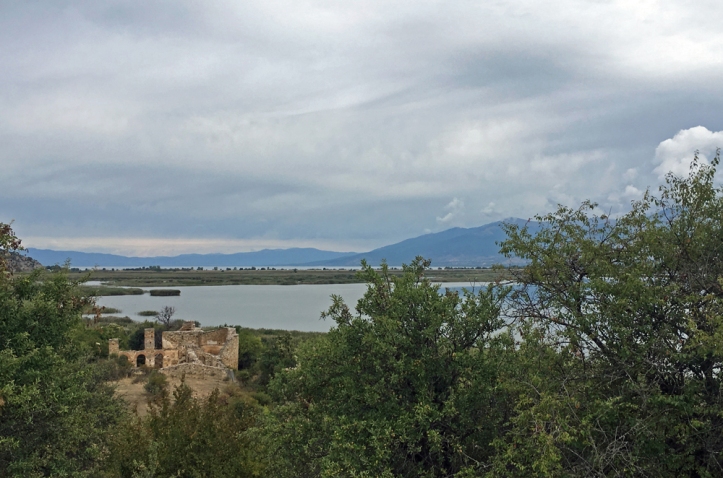 On the island: the ruins of Ayios Achillios (where I later encountered a billy goat) are seen in the lower left and in the distance is the larger Prespa lake beyond the flat strip of land, looking towards FYROM.

The Prespa area, particularly along the fertile ground around the lakes, is noted for its beans. In fact, when we visited earlier this month, most of the agricultural land was planted with beans that extended for miles, right down to the lake shore. 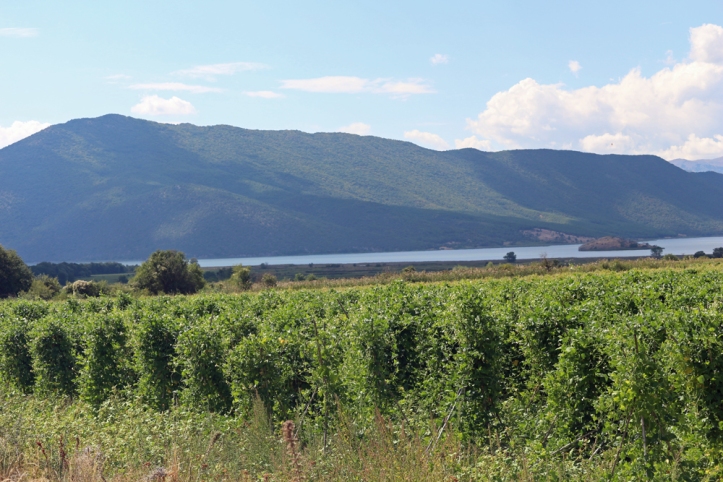 Just by the bridge to the island of Ayios Achillios rival bean sellers bring their crops to sell. This cheerful lady supplied us with kilos of dried beans destined for our kitchen in Athens. 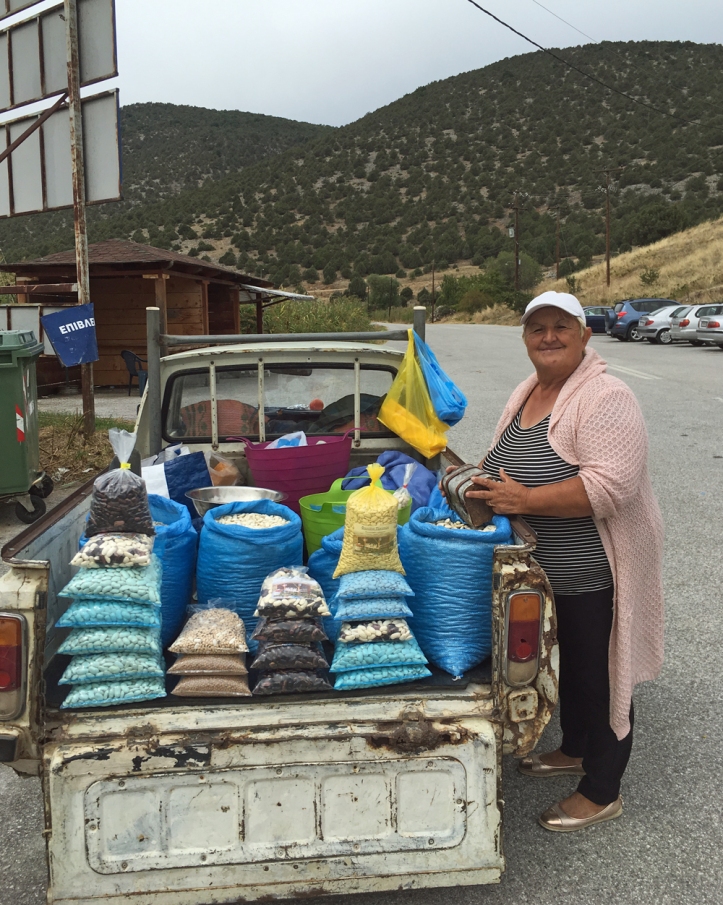 One bean I had never seen before were “black” (i.e. dark brown) giant beans. Later, as we drove around the small lake we headed to a tiny village on the coast simply named Mikrolimni (“Small Lake”) to a fantastic fish restaurant. There was no written menu, just a verbal recitation of what was available that day. 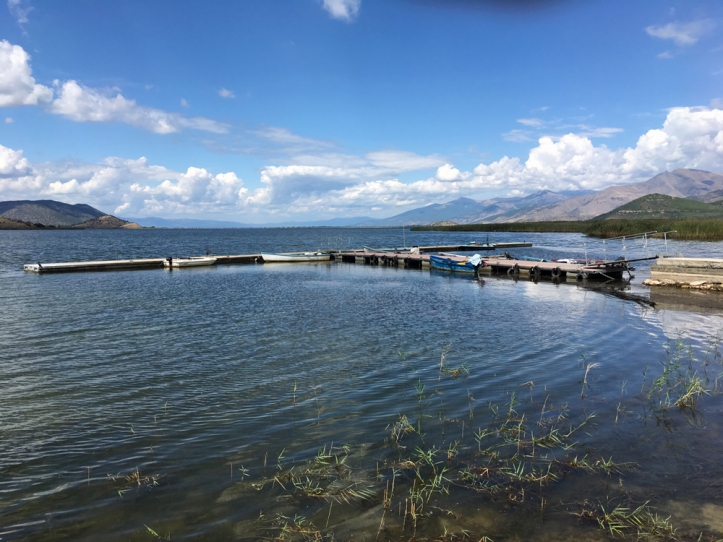 A view from the terrace of the fish restaurant over the lake towards the two islands.

Other than fish, we were offered at least 5 different beans salads. Perhaps there were more, but my mind clicked off when they said giant black bean salad. Naturally we chose this one. It is very similar to my Kapetan Nikolas Bean Salad that was inspired by a bean salad we had on the Cycladic island of Koufonisi. This salad, however, uses a different bean as well as having a slightly different seasoned dressing, but the technique is the same. 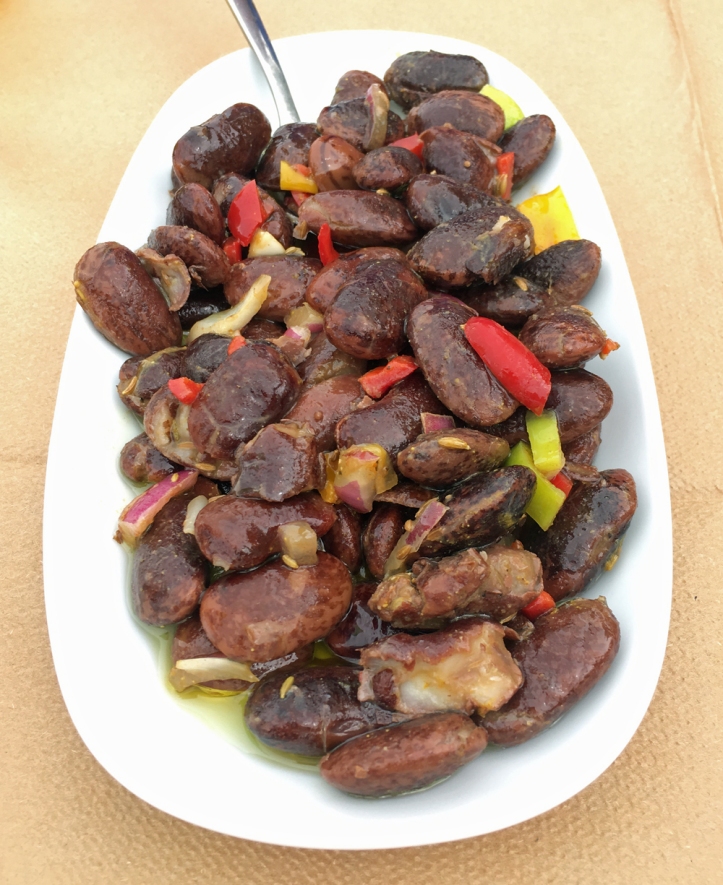 Prespa Bean Salad
Reconstructed in my Athens Kitchen and very close to the one we had while lunching on Lake Prespa. Since black Prespa beans are not easily found, you can substitute red kidney beans as they are the closest in texture and taste.

Depending on the age of the beans, they may not require pre-soaking. Since mine were from this year’s crop, I omitted the overnight soak in cold water. Put the beans into a large pot with clean cold water. Turn on the heat and cook until soft (approximately 1 hour). Drain, rinse and cool in a bowl.

De-seed and slice the peppers into long thin strips. Dice the strips into small pieces. Finely chop the onion or spring onions. Add these vegetables to the beans. Add the fennel seeds and mix.

In a separate bowl, pour in the vinegar, oil, honey and cumin. Whisk and add the dressing to the bean mixture. Season with salt (it will need it) and pepper. Mix and let it sit for a while – at least an hour before serving or ideally overnight in the refrigerator. Serve at toom temperature and add more olive oil if you would like.