What happens when you have a lump of leftover pasta frolla and a big bag of walnuts? Obviously, it was time for inspiration to strike. After frantic internet searching, it did with a recipe for a Sicilian pastry and almond biscuit called Infasciadedde. I simplified and adapted it and the result was this sweet little bite.

Just to make sure that creation wasn’t some baking fluke, I purposely made them again with a whole new batch of sweet Italian shortcrust pastry, pasta frolla.

It wasn’t an accident and I now have precise measurments of ingredients. Initially, I simply tossed in random handfuls of walnuts and haphazard amounts of honey in the processor until I got the right texture.

These walnut bites (for want of a better title) are spectacular biscuits that aren’t too sweet and have a crisp crust and a chewy centre. They could easily become addictive. Plus, they are a great addition to the cookie repertoire for the holidays.

Walnut Bites
The link for the pasta frolla is for one of my previous posts where I discussed three different versions of the pastry. However, you can use any version of pasta frolla recipe you would like.

Make the pasta frolla. Wrap in greaseproof paper and let it rest in the refrigerator for at least an hour.

Prepare the nut filling by grinding the nuts in a food processor until they are fine then add the cinnamon and honey. Process until the mixture forms clumps. Remove and set aside.

Take your pasta frolla and roll half at a time on a floured board until it is about 0.3 to 0.4cm thick. Cut into strips about 3cm wide, removing the ragged edges on the side and top and bottom. Do the same with the other half of the dough, then again with the cut scraps.

With floured (or oiled) hands, take some of the sticky nut filling and roll into “ropes”, placing them in the middle of the pastry strip, pinching the “ropes” together until the entire pastry strip has a nut filling from top to bottom. 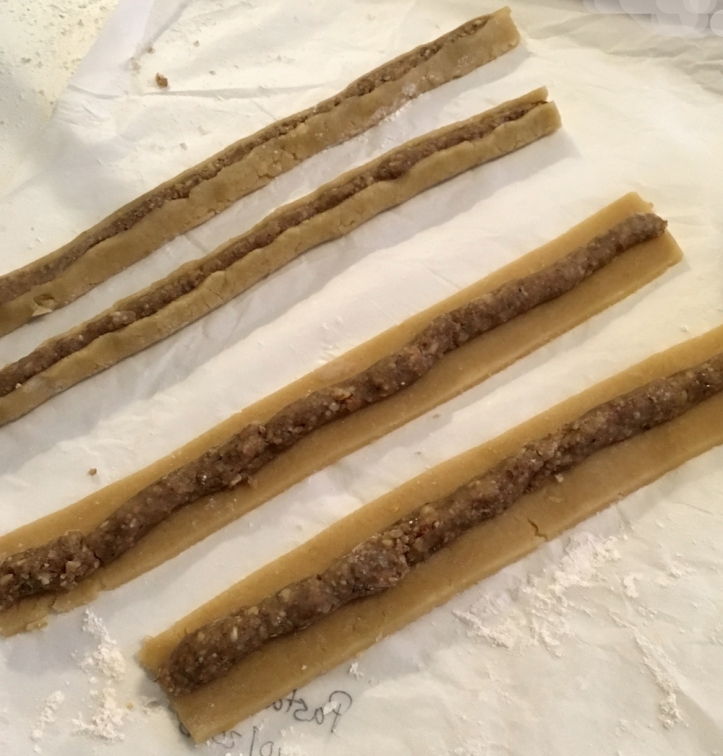 Lightly wet the pastry edge and bring the sides up to cover the sides of the nut filling. Do not cover completely. Gently press down so that the filled pastry is slightly flattened. Cut into pieces about 3 to 4cm long.

Place on a backing tray lined with baking parchment. You will not need to put much space between the biscuits as they will not expand. Bake at 180 degrees C for about 15 minutes. Do not let them get over brown. Remove and let them cool on a rack.

When the biscuits are cool, dust them with powdered sugar. Store in a tin or container with a tight lid.

* On another occassion when making these again (I did say they were potentially adictive), I found myself short of honey, so substituted a chocolate syrup (having a similar consistency) for half the honey. It worked very well and gave the biscuits a bit of a chocolate  flavour without detracting from the taste of walnuts.