As a foreign visitor – and one whose command of the language is very basic – observation rather than participation in local events is generally the rule. However, after reading about so many food festivals (or sagre, singlar sagra) in Garfagnana, Northern Tuscany, in Francis’ and Debra’s blogs, respectively From London to Longoio and Bella Bagni di Lucca, I wanted to find out what the cultural phenomenon of a local sagra was like.

Many of these food festivals are held in the summer months, with the exception of those that celebrate autumn specialties – such as truffles and chestnuts. So, our choice was limited in finding one in early September when we were in the region. Luckily, there was a sagra advertised in the little town of Filecchio, quite close to the larger town of Barga which you are more likely to find on a map. It was celebrating polenta and uccelli (little game birds) held in the town’s sports fields. Sagra ethnography was the result, a new term coined by me to describe our attendance as non-local foreign visitors.

First, it was very clear to us that the entire event was extremely well organised with many local volunteers (of all ages) to help from parking to ordering to cooking, serving and cleaning up. There was a simple and efficient system and everyone helpful and friendly.

You start by ticking a form that lists the available food and drink on order and list the table number where you are seating. Naturally for this sagra, polenta featured in many of the dishes. Next step is to present your form to the order tent (colour-coordinated? for this event). 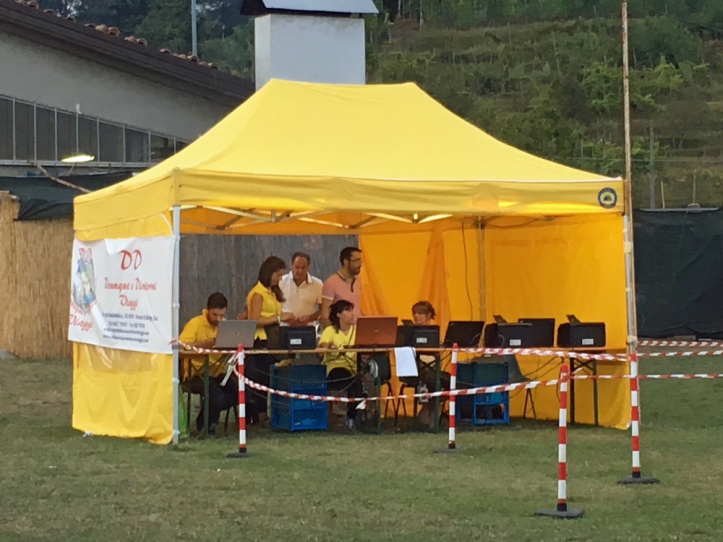 Your order is entered into the computerised system and payment is made. On the dining out scale, the total is generally on the inexpensive side. You then collect your beverages – that usually include a selection of local wines on tap. Sit at one of the long communal tables where you indicated on your form you would be sitting and then wait. A troop of local youth,  dressed appropriately in polenta yellow tee-shirts at this sagra, serve your food on paper plates.

The entire event is designed to be enjoyed by groups, mainly locals, friends and families. It is a way for the society to bond over food  – the cultural principle behind communal feasting.  These sagre are often sponsored by local businesses and, importantly, it raises funds for the community. The food is basic, but still delicious. At this particular sagra, the winner of the pecorino cheese raffle was later announced and a dance band played to round off the evening. A nice way for a community to end a September day.