Earlier last month we were in Italy staying in an idyllic place, a wonderful 15th century monastery now an agroturismo retreat in the countryside of Garfagnana.

Our self-catering apartment’s kitchen was small – so small that it fit into a cupboard. 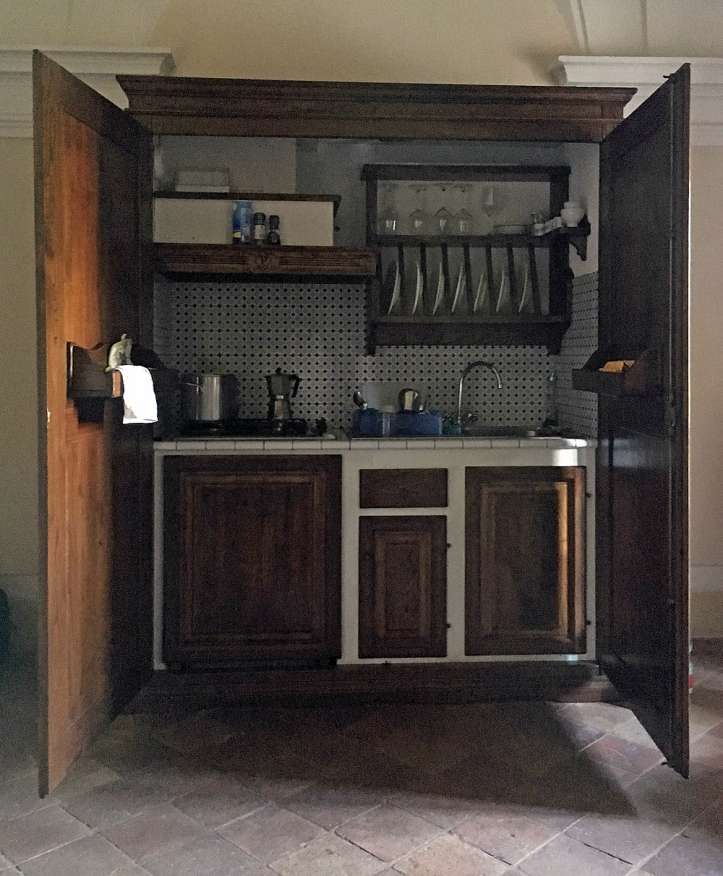 Aside from eating out at any number of great restaurants in the area and fabulous dinners prepared by our host in the monastery’s kitchens, we managed a few meals in this closet kitchen with produce from the local region.

The region is most noted for its pecorino cheeses – in various stages of ageing from fresco to stagionato. However, there are other cheeses produced in the region – one of which is Biagiolo, a mild soft cow’s milk cheese with a white edible rind. It was created five years ago by the newest generation of cheesemakers at the family run Caseificio Marovelli just outside the village of Vibbiana, located north of San Romano in Garfagnana, on the hill just opposite the Medieval fortress of Verrucole that you can see in the photo below.

We bought the Biagiolo at source amidst this spectacular hilly countryside. The family also has a shop in the area’s centre of Castelnuovo di Garfagnana. Although I applaud their innovative spirit, I must admit it is a very bland cheese. I don’t regret buying it since I believe in exploring new tastes, but it is not something I would come back to.

On the other hand, mondiola of Garfagnana, a ‘U’ shaped salami stuffed with a bay leaf, is packed with flavour. Two years ago, we were introduced to homemade mondiola at Azienda Agricola Cerasa – the Cerasa Farm – which I blogged about here. The skin (pig intestines) is visually a bit off-putting, but the tender salami inside is spectacular. 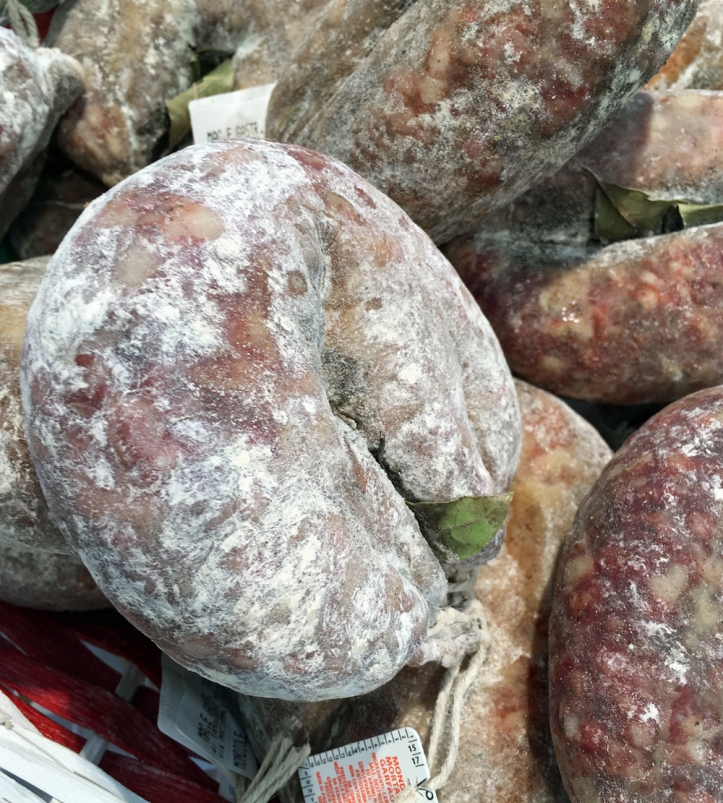 And other preserved meats were enjoyed from the wonderful deli and café, Osteria Vecchio Mulino, in Castelnuovo di Garfagnana. 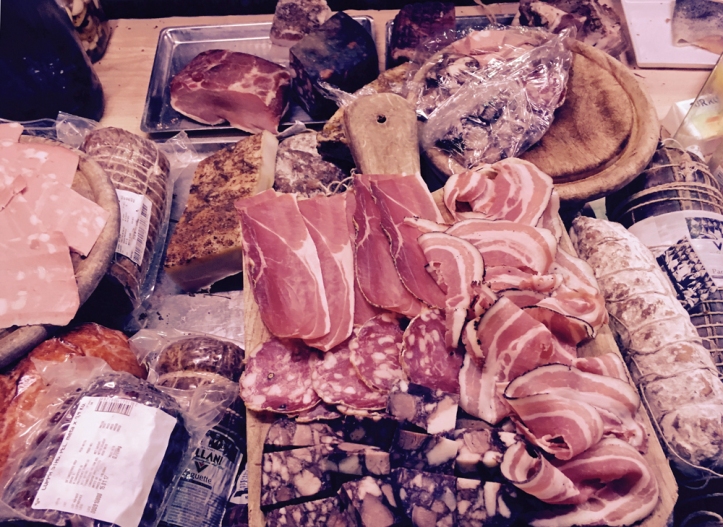 We bought a cookbook on Tuscan food, recommended by our host. Before we left Garfagnana, I earmarked a few recipes for trial in my Athens kitchen.

The flatbread shown on the front cover is called cecina (or farinata as it is called in Liguria). It is made with chickpea flour and sometimes referred to as a baked pancake – something similar to Provencal socca. Another souvenir that came back with us was a bag of chickpea flour milled at an 18th century water mill, but more about the mill in a future post. I couldn’t resist making the bread once we were back in Athens. There is always a learning curve on trying new recipes – a good philosophy to adopt to cope with disappointment when the recipe doesn’t go as expected. Once I perfect it (and source more chickpea flour here in Athens), I’ll probably post the recipe. Despite too much olive oil, the uncertainty of the flour-water ratio and the bottom sticking to the pan, it was still very delicious. 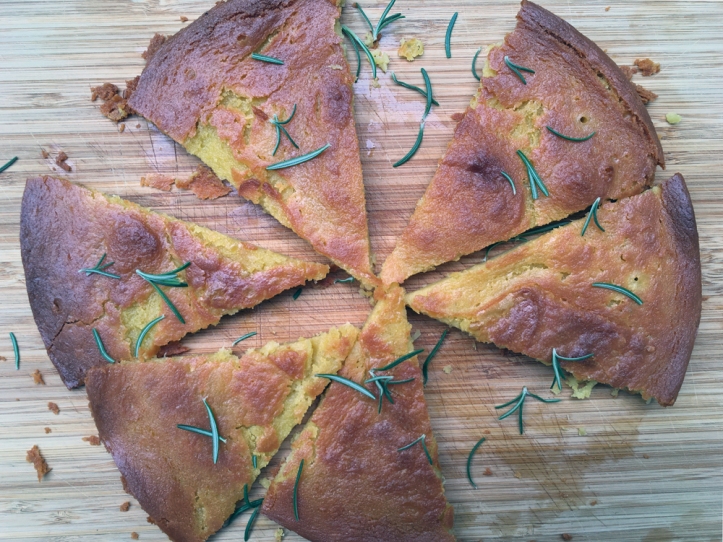 Meanwhile, the produce in our laiki (market) here in Athens has been transformed in my absence – autumn veggies and fruit are more in evidence and fewer summer greens that I highlighted in last month’s IMK post, Veggies in the Kitchen.

Preserving herbs from the garden has also been a priority. Mint leaves have been cleaned and frozen, and the same procedure applied to parsley, coriander, dill and basil. We had such a bumper crop of basil – mainly the tall Greek columnar basil – which was also transformed into basil oil for drizzling on soups or bruschetta or making into salad dressing. Also, more basil went into pesto (including more of the basil-mint ‘almost-pesto’), most of it for freezing in small packets.

There are two basic procedures mentioned in numerous recipes for a simple basil oil.

1. The simple method: Chop the cleaned and dried leaves and salt in a food processor first then add the oil. A variation on this theme places the oil mixture, once it is processed, in a saucepan, bringing it to a simmer and then cooling before storing or using.

2. The slightly more involved method: Blanch the basil leaves in boiling water for 1 minute, strain and put into a bowl of cold water. Strain again and dry throughly (between two towels works well) before blending with the salt and oil.

I tried both methods and discovered that the slightly more involved one (#2. above) yielded a better result. However, I also added a pinch of baking soda to the boiling water – a trick to help green vegetables retain their fresh colour when they are boiled. The second method was greener, emulsified better and even tasted better. It keeps for a few weeks in the refrigerator, but I have frozen mine in small containers.

A surprise gift of New York maple syrup was brought to me by the lovely Palmosa who follows my blog. A very welcome present from my home country. Pancakes soon… 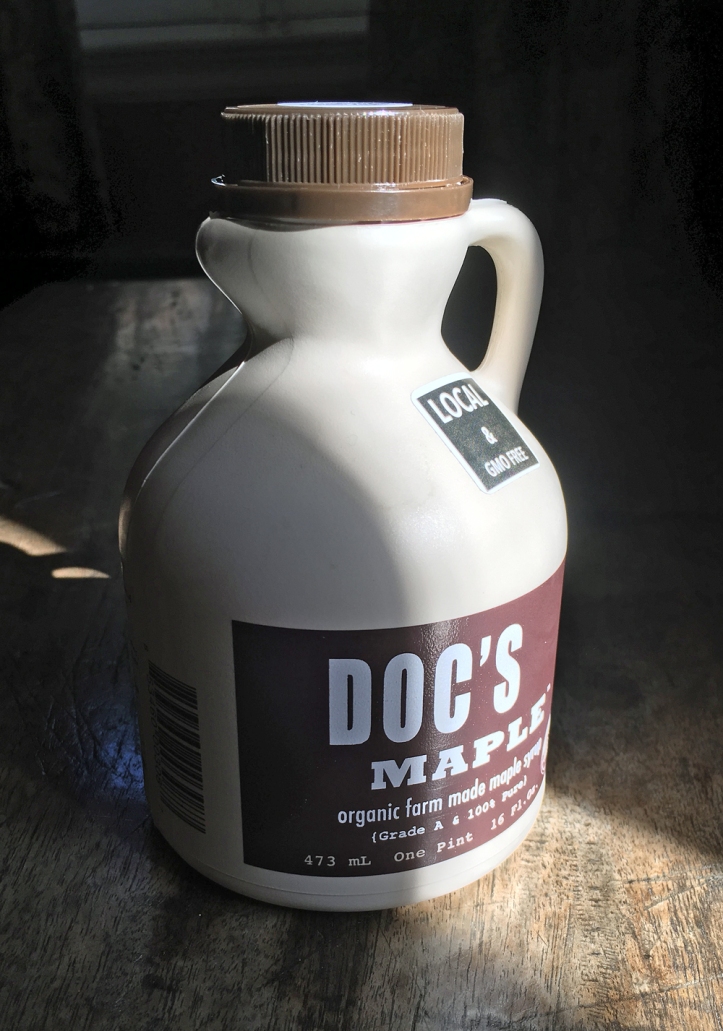 Other goodies arrived from people back from holiday: hazelnuts from Georgia (the country, not the US state), Sicilian wild fennel seeds (from Sicily, of course) destined for the garden, a sampler of cinnamon spiked liqueur as well as a jar of pickled caper berry & buds both goodies from the Cycladic island of Amorgos.

From a quick weekend trip to the island of Naxos, we brought back Kitron Naxou, a liqueur distilled with citron leaves (citrus medica). It is exclusively produced on Naxos and comes in three alcohol strengths and sweetnesses in inverse relation to one another – green (weakest and sweetest), clear (medium strength and sweetness) and yellow (higher alcohol and medium dry). We were also given a gift of lovely jams made with local Naxian produce by hospitable islanders. This large agricultural island is a foodie paradise. We will definitely visit again.

Back to normal, or what passes for it, as the new academic year begins.

A monthly IMK (In My Kitchen) post. Check out other IMK bloggers, each of us writing about what’s been happening in our kitchens each month, now hosted by Liz @ Bizzy Lizzys Good Things who has graciously taken up the challenge (and before her by Maureen @ The Orgasmic Chef) to list all of us IMK bloggers. For earlier IMK posts, see the fabulous Celia @ Fig Jam and Lime Cordial who, began the IMK phenomenon and until 2016 listed all of us IMK bloggers. A chronological listing of my In My Kitchen blog posts can be found on a separate page, just click the link or look under the heading of Diaries in the Menu bar above.