Veggies In The Kitchen

Our market – the laiki – pared down over August, the month when it seems everyone flees Athens and many of the local shops post ‘gone on holiday’ signs. Only a few market vendors persisted in setting up their weekly stalls. There was plenty of street space for an improptu game of tavli. 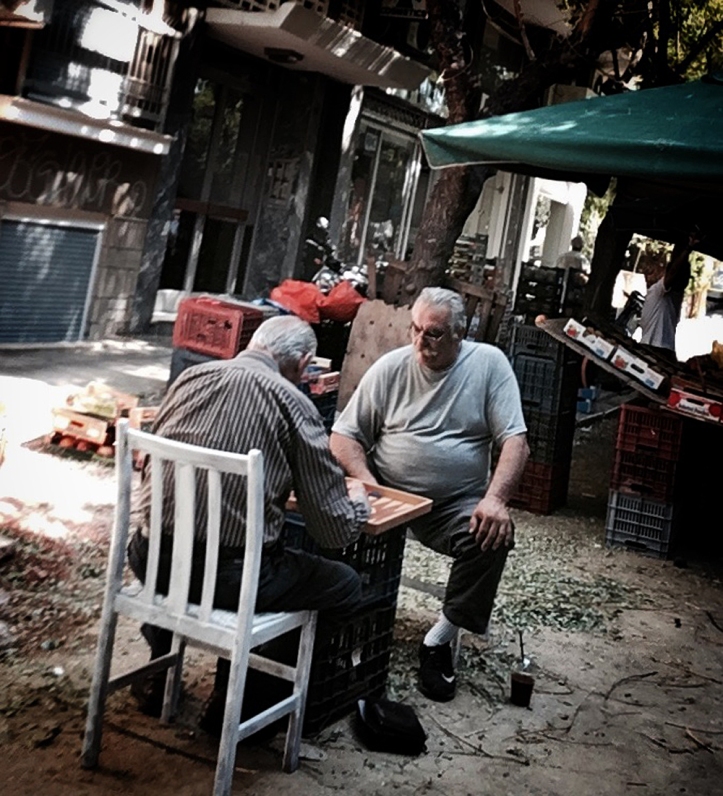 Of course, in the middle of the month, on the 15th of August was one of Greece’s most popular holidays – the Feast of the Panagia (Virgin Mary). Then, everything stopped. Slowly, it is beginning to start again.

In the past few months, we have had quite a few vegetables and a number of vegetarian dishes in the kitchen – some culled from the laiki, others from the garden. Many traditional Greek summer vegetarian dishes are sautéed greens, warm ‘salads’ served at room temperature. First was Summer Tsigarista with vlita, glystrida and fresh tomatoes. I know it doesn’t look like much, but it is delicious! Both vlita (leaf amaranth) and glystrida (purslane) are common summer greens available in the market.

Like that tsigarista, I recently encountered an unusual greens sauté in the Peloponnese, said to be a speciality of the Laconian region. But, take this with a grain of salt as I’ve been told it can be found in other places in Greece where they make a similar claim. It uses many parts of the courgette (zucchini) plant – the tender leaves (yes, you read that right – leaves), the tiny baby courgettes and their yellow blossoms. It is called kolokythokorfades, quite a mouthful, but it simply breaks down into two words meaning courgette tips (or ends). Sometimes it is simply called korfades. With the instructions I’ve been given, I hope to make it once I can assemble all the ingredients. 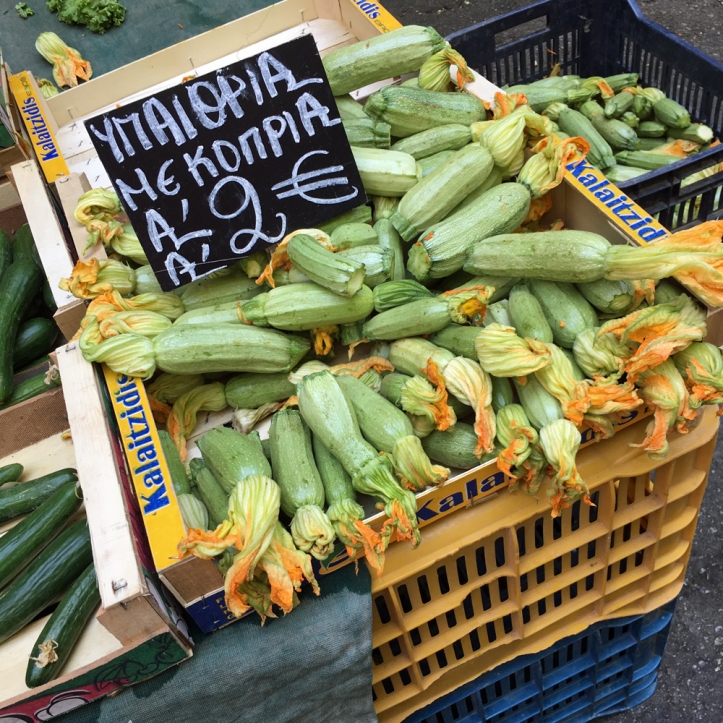 Meanwhile, we have a plentiful supply of other greens. Vlita, the leafy bits and tender stalks of amaranth, are often encountered in restaurants as horta (the generic word for greens). It is a warm, wilted ‘salad’ frequently paired with boiled baby courgettes (these from our garden) and liberally dressed with fresh lemon juice and green olive oil.

Vlita it is a incredibly versitile vegetable that can be used in the same way as chards, kales and even spinach. Although, it is wise to remember that it is slightly bitter.

A few pieces of an unusual pita (pie) of multiple layers of homemade phyllo sheets alternating with thin layers of greens made its way to my kitchen this past month. It arrived as a gift from Thessaly – a region known for its pies – packed unassumingly in foil. This pita was made using a combination of courgette leaves & flowers (korfades), vlita and spinach. Something to investigate – perhaps visit its place of origin to see how it is made. Any excuse to go travelling.

I’ve also had a love affair with that other common summer green – glystrida (purslane) – ever since I first encountered its fleshy leaves in a Greek salad (horiatiki) years ago. I’ve since eaten it raw in salads many times, but have only just been starting to cook with it. 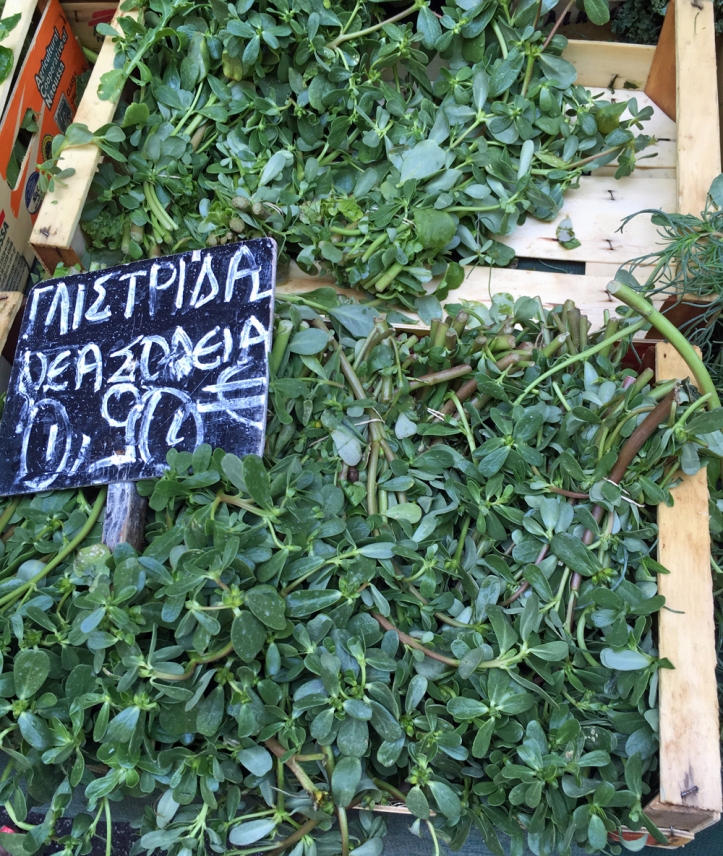 We absolutely loved this Purslane Risotto. In fact, it even received the thumbs up from my risotto-ambivalent spouse. 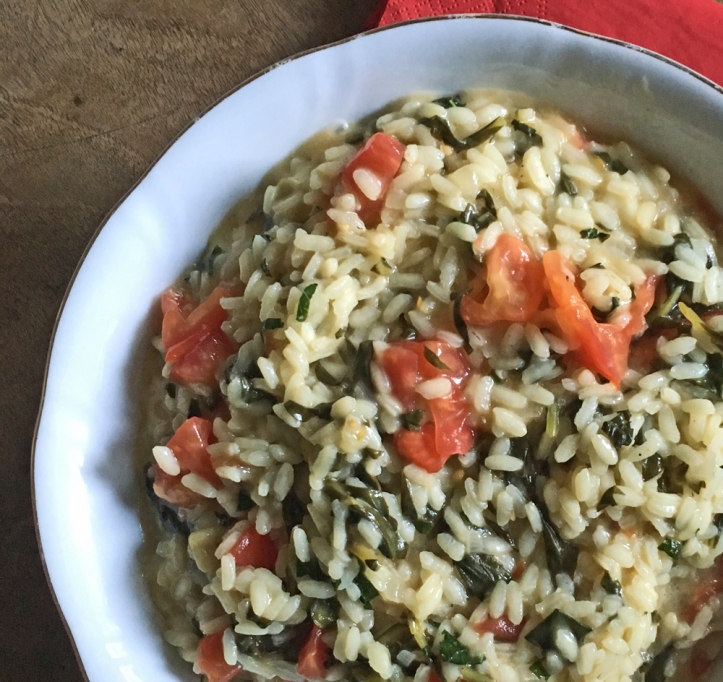 Yet another interesting green that turned up in the summer market was almyriki, a relative of tamarisk that grows wild on the beaches all over Greece. It is slightly salty, high in iodine and is blanched like vlita to make a warm salad.  It is a natural accompaniment for fish.

Meanwhile, throughout the month, the garden continued producing aubergines, peppers, courgettes and a few tomatoes. The usual response was briam, a Greek stew of these vegetables plus a few potatoes which I recently posted about in Basic Briam. 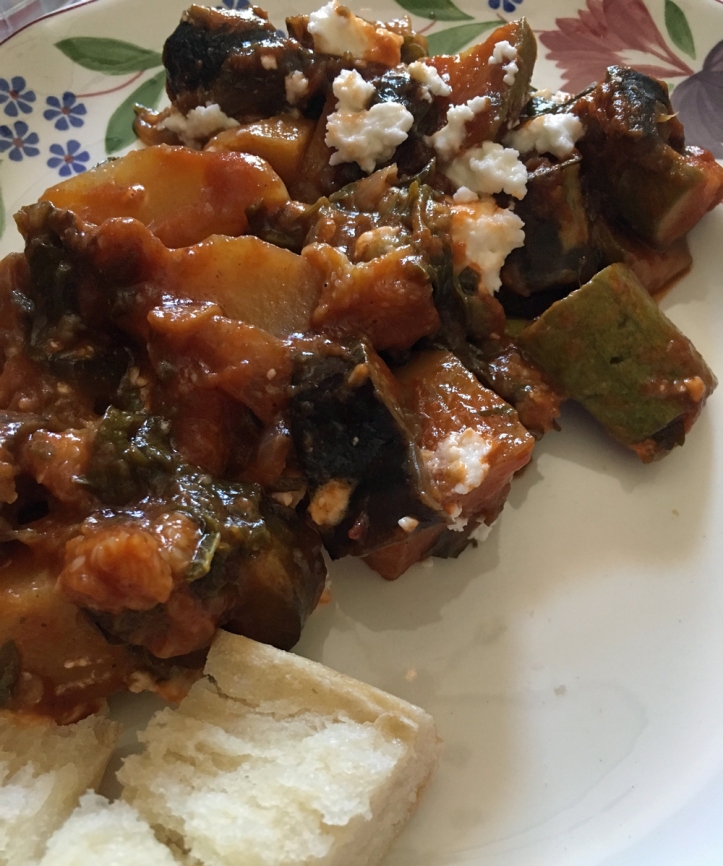 Then there are a multitude of beans available. One of my favouites is the fresh borlotti beans in their speckled pods. These are fantastic made as Fagioli Borlotti all’ olio that I posted on almost two years ago. The procedure is the same was as with dried beans, but no soaking is involved and there is less cooking time required.

Dried Borlotti Beans in my UK kitchen two years ago

Fresh Borlotti Beans in their pods from the Athens laiki

Skinny flat-ish green beans (stringless, of course, but I’m not sure what variety) from the market made a good fasolakia, a traditional & simple stew of tomatoes and beans. It was made perfect with a little crumbled feta and a homemade sourdough baguette to sop up the sauce.

Lastly, summer would not be the same without tomatoes. We have some in the garden, but the crop is not faring well – except for the cherry tomatoes, that is. From these little tomatoes I created my version of domatokeftedes, tomato fritters. Post on these coming up soon. 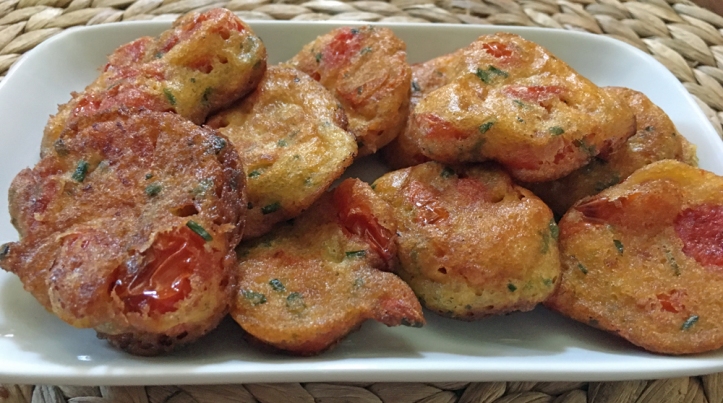 All too soon the laiki will be filled with autumn veggies – cabbages, pumpkins and all those wonderful wild greens. But, meanwhile, summer is not over yet. Watermelons – that barometer of hot summer months – are still piled high in the market.

A monthly IMK (In My Kitchen) post. Check out other IMK bloggers, each of us writing about what’s been happening in our kitchens each month, hosted by Maureen @ The Orgasmic Chef (who has been out ill after surgery since the beginning of June, but I hope is now healing well). For earlier IMK posts, see the fabulous Celia @ Fig Jam and Lime Cordial who, began the IMK phenomenon and until 2016 listed all of us IMK bloggers. A chronological listing of my In My Kitchen blog posts can be found on a separate page, just click the link or look under the heading of Diaries in the Menu bar above.