Clean Monday or Καθαρά Δευτέρα – yesterday – marks the first day of Lent in the Eastern Orthodox calendar. Of course, there are special customs and foods attached to this holiday. Normally, picnics and kite flying feature in the day’s activities, but Monday here in Athens was cool, grey, dreary and mostly wet. There were more umbrellas out than kites. The umbrellas were necessary for the trip to the bakery in order to acquire lagana, a flatbread similar to foccacia, eaten specially on Καθαρά Δευτέρα. Funnily enough, I think somewhere in my blog there is a discussion on the etymology of lagana – from the Greco-Roman word for flat pastry dough, the same root for the word lasagne.

We dutifully went out to purchase our own lagana from one of our favourite neighbourhood bakeries. Behind the counter, as you can see in the photo above, were filed flat loaf after flat loaf, all liberally covered with sesame seeds. Being a bread baker, however, I had to have a try making my own sourdough lagana (as shown in the image below). The procedure is exactly the same as making focaccia. So, now we have two surprisingly similar lagana, ideal for scooping up another speciality of Καθαρά Δευτέρα – Taramasalata, which I blogged about last year. 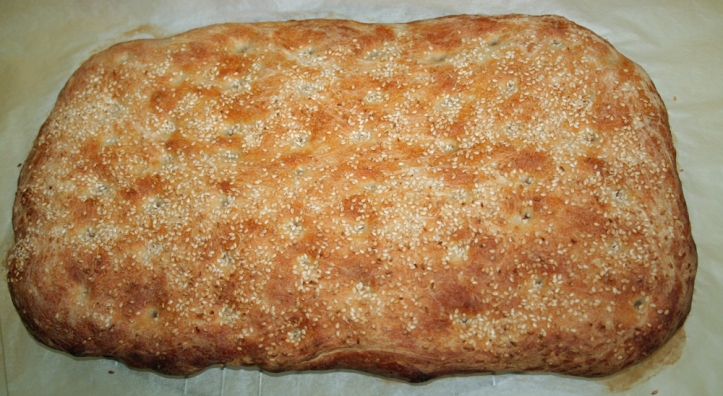 Of course, that was not the only special Lenten food item on offer at the bakery. Sesame halva (and also the semolina variety) was on display. The chocolate versions were very tempting, but we settled for the classic version studded with almonds.

And, don’t forget to rip your lagana and not cut it. I’ve seen similar superstitions involving knives and bread in various places including Mary Taylor Simeti’s book on Sicilian food, Pomp and Sustenance. Must get to the bottom of it.