In An Athens Kitchen

We are beginning to settle into our new home in Athens. It is actually part of a British academic institution that serves as a hub for UK research in all aspects of Hellenic culture. So, we are now part of a community of staff and students, something very different from our home in the UK.

In the Athens kitchen are very lucky to have the help of a cook/housekeeper, whom I will call S for the purposes of this blog. Among her responsibilities, S helps cater events (lectures, seminars, conferences, etc.) held in our public rooms. As a consequence, the kitchen has a large professional oven that slightly intimidates me. It is huge, fan assisted, and can fit numerous wide trays, perfect for catering – or pizzas for a crowd.

Caddina, my lucky Puglian hen, has emerged from her protective bubble wrap, hopefully to spread good luck in this kitchen. (My old and rather fragile Kitchen Witch has remained in the UK to protect the kitchen there). I might need that luck while I get used to the oven.

Muriel has been activated – from dried crumbs to a bubbly starter, now officially a προζύμι, pronounced prozimi, the Greek for sourdough starter “pre-dough”). Interestingly, Προζύμι is also the name of a short-lived blog (in Greek) with a dozen or so posts from 2012 on sourdough bread, with tips on creating the προζύμι from scratch. Perhaps perusing it will improve my Greek, although at the moment, the pictures make more sense to me than the text!

My first loaf of bread was delicious, making me a little more confident baking in the oven. One thing I learned is the rise time for the dough is much shorter than in the UK – due to the higher ambient temperature, no doubt. The temperature may also be a factor in the brilliant crunchy crust and chewy crumb (just the way I like my bread). However, that might be down to the professional oven in the kitchen. Or, perhaps it may be due to the flour. I found Robin Hood brand flour (a Canadian brand, which I could also get in the US) with 13.2% protein and within the bread flour range of gluten content. A Cretan flour – Μ­ύλοι Κρήτης (Cretan Mills) – is also worth testing which contains about 11.2% protein, although it is more an “all-purpose” type flour.

First loaf made (half eaten!)

Pizza dough was next. Both of these were made before my specialist baking items arrived. Baguettes and breadsticks are next with the arrival of those pots and pans from the UK. I’d also like to experiment with a long rise of the dough in the refrigerator and the effect of different hydrations. Amazing how the differences in environment between the Athens kitchen and my (cool) UK kitchen affect the production of something as basic as bread. Also, the προζύμι will be acquiring local yeasts, another factor that will alter the taste – bread terroir!

The end of that first loaf formed the base of a simple tomato soup – Pappa al Pomodoro – from the River Cafe Cookbooks under review by The Cookbook Guru for the months of September and October.

Meanwhile, the first preserving in the new kitchen began with fig jam, which I recently posted. Since my Kilner-style preserving jars (Ball or Kerr brands in the US) were back in the UK, I used a different technique – hot sterilised jars with a good lid that still had the “rubber” seal intact, packed with hot preserves, lid screwed on tight and inverted, although many of my Austalian blog friends say that inverting the jar is not necessary. The lid should then vacuum seal.

There was a glut of long mild green peppers from many plants in the kitchen garden. They are often called Turkish peppers, a Capsicum annuum cultivar, also known in Italian as friggitelli. I have yet to learn the Greek name for them – beyond the generic πεπέρι (“pepper”). I picked some for pickling (recipe coming soon) and froze more for future use. 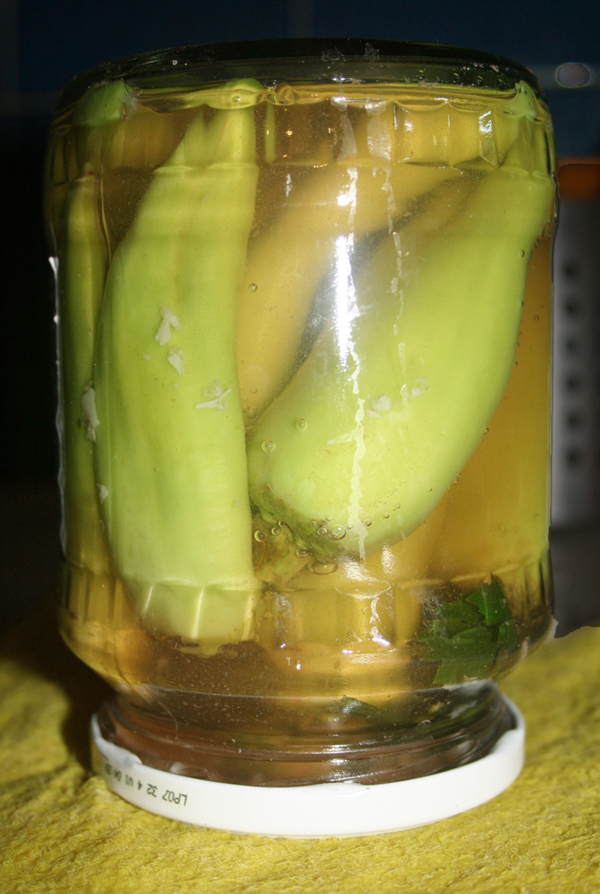 S has been teaching me about many χωριάτικα (village-style) dishes – a style of cooking perhaps best equated with Italian cucina povera. One lunch, she made μακαρονόπιτα, a phyllo pie filled with cheesy pasta. One square as a serving and absolutely delicious paired with a simple tomato salad. An added benefit is that it freezes well for future lunches! 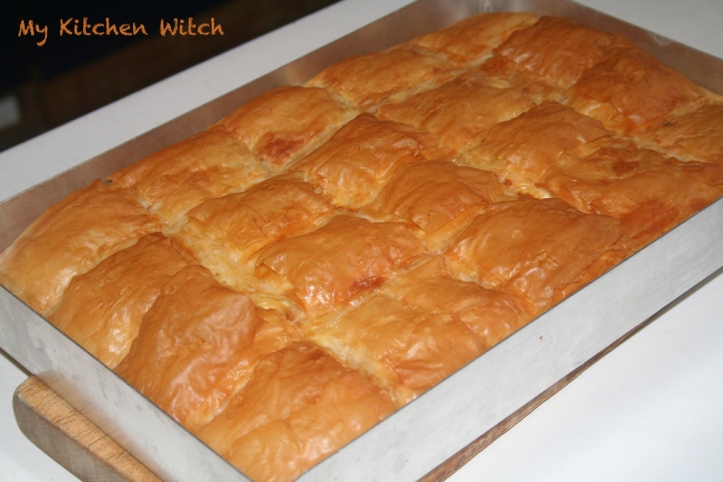 The following week was Spetsofai (σπετζοφάϊ), a traditional spicy Greek sausage, onion and pepper casserole. Peppers, of course, from the garden! 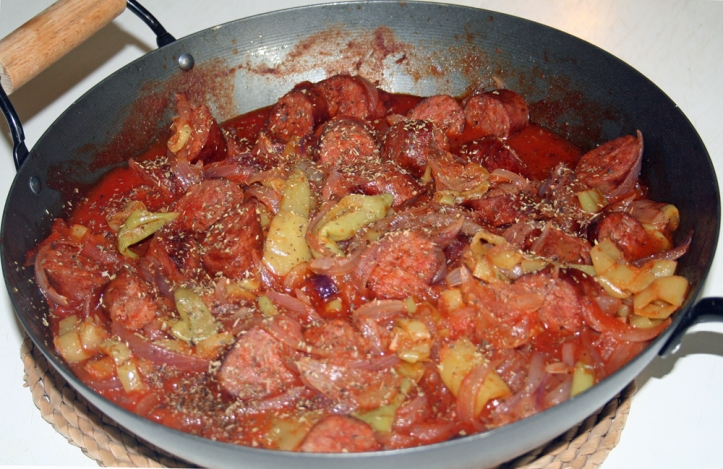 Lentil soup, lemony chicken στο φούρνο (“in the oven”), and, of course as we enter the cooler months, many recipes for cabbage are to follow. Although you can get nearly any vegetable or fruit in the supermarkets here, most still buy and cook seasonally. Am enjoying being in this Athens kitchen.