When I first set out to make my own bread – at least on a regular basis, creating and using my own sourdough starters – I found distinguishing between various terms like levain, biga, sponge, pâte fermentée, sourdough starter, poolish, etc., a tad bit confusing. Of course, some of them are not English – terms borrowed from other languages. Yet, in essence, it occured to me that they all mean the same thing, or at least variations of the same thing. They are all preferments.

Preferments are just that: pre-, a suffix meaning before, and ferment pertaining to fermentation with yeast. Preferment, thus, is a general name for the mixture (usually made up of yeast, water and flour) made prior to making bread dough – often many hours or even days before. Their purpose is to allow the yeast a slow time to grow, which in turn has beneficial effects, such as an improved flavour and texture of the bread and a longer keeping time. However, there are different sorts of preferments with different names – each of which have flexible definitions. Generally, however, some are made with natural, wild yeasts (eg. sourdough starter, levain) and others made with commercial yeasts (eg. poolish, sponge) – at least since the 19th century when commercial yeasts became available. Some are mixed for the purpose and others made from bits of dough left from previous bread making (eg. pâte fermentée). Some are high hydration (i.e. more water in the flour:water slurry) and others are quite firm (eg. biga). Add cultural factors – such as regional differences and individual preferences – into the mix and you get a world of different sorts of preferments. 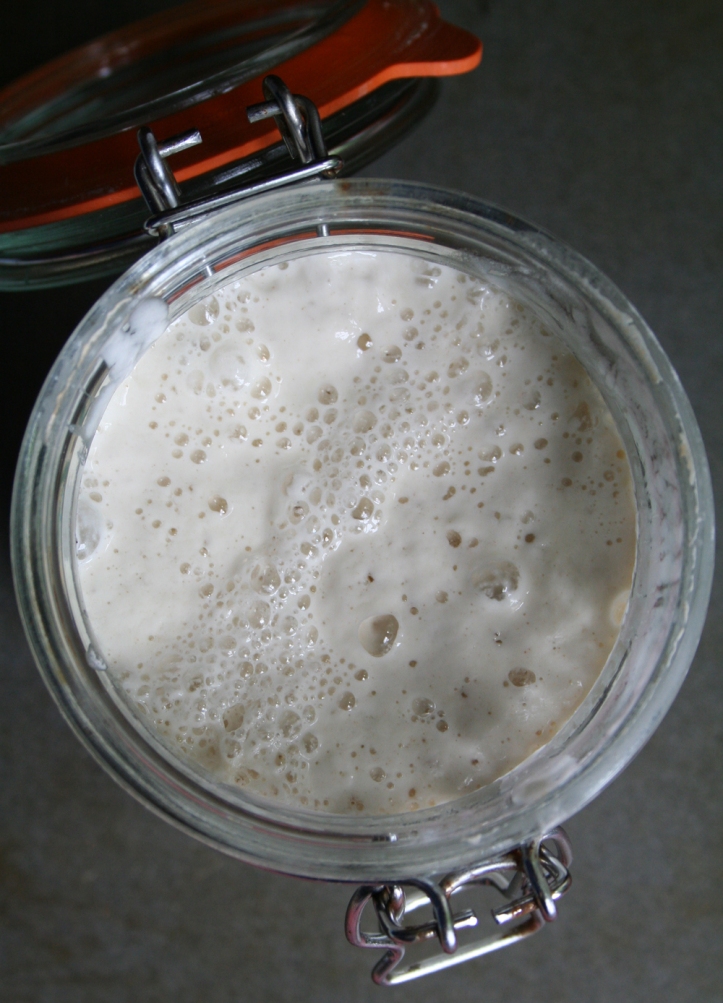 So, when reading through Carol Field’s book, The Italian Baker (the book under review by The Cookbook Guru for July and August), I found myself carefully studying her section on regional and rustic breads (Pani Regionali e Rustici) where she describes the traditional Italian preferment known as a biga. I was interested in what she had to say, since the research I had done prior to this indicated that a biga was generally considered to be a firm preferment made with commercial yeast, but some sources indicated that a biga could also be created from the previous batch of bread dough much like the French pâte fermentée, but the dough removed prior to adding salt. Yet other sources indicated that, although normally firm, a biga can be high hydration – wetter than normal, more like a poolish or sponge. Plus, there was a specific regional Puglia biga that was very much like (if not identical to) the generic biga, but the term implied that it originated in Puglia, the southern district of Italy that is often known as the country’s bread basket. To add to the confusion, some Italian bakers eschewed the term biga and simply referred to it as madre (mother) although it was clear that they were referring to the same thing.

So, what does Carol Field have to say? Well, for starters, she mentions two different biga types – her Biga Universal Starter using commercial yeast, the other Biga Naturale, made in a similar way as a sourdough starter. (She also mentions the cute word bighino, a diminutive referring to a small amount of biga, but I mention this as an aside simply because I rather liked the word.) Carol Field writes that many Italian bakers create their biga from a portion of unsalted dough from the previous day’s bread, but as she wisely indicates, a biga must begin from somewhere. Her recipe for Universal Starter Biga begins with a small amount of dry yeast, water and flour – at a hydration level of approximately 60%, so quite firm. This is let to rise for anywhere from 6 to 24 hours. It will triple in volume and become wet and sticky. Amounts are measured out for use, but the remainder can be refrigerated for a few days or even frozen, and brought back to room temperature to be used, but no refreshing and continuing the culture.

Field’s Biga Naturale, on the other hand, is (mostly) a “natural” wild yeast culture. She has altered the traditional 5 to 8 day schedule of creating a true sourdough starter – speeding up the process by adding a small amount of yeast to the flour and water. This time, unlike her Universal Starter, she starts with much less yeast, flour and water. The hydration level is also more like 75%. This biga then undergoes refreshments after sitting up to 24 hours between feeding with more flour and water, cutting the creation time down to a few days. Like other similar sourdough starters, it can now be continually refreshed and stored in the refrigerator when not in use. She also says it (unlike the traditional all natural starter) will last longer between feedings. If the starter begins to be “less lively”, she advocates adding a smidgen of yeast to perk it back up again. I find Field’s “almost” biga naturale an interesting (and rather practical) mix of old and new techniques. I also learned that my initial researches were all correct – there are many variations of biga.

Funnily enough, biga is also a Roman racing chariot drawn by two horses – from the Latin bi- (“two”) + jugum (“put together” or “yoke”).