I admit it. I do go a little crazy at this time of year. As soon as the new chestnuts are available in the market and invariably on special offer, I begin buying them. There are always some in my shopping cart. Yet, it never ceases to surprise me that – after a while – I have accumulated a mound of fresh chestnuts stored in the refrigerator. Yes, we roast them for Christmas, but there are only so many one can eat. So…often they are popped into the freezer to be dealt with later. Only then do I find yet more I had stashed there earlier – a vague “earlier” since I have not dated the packets. 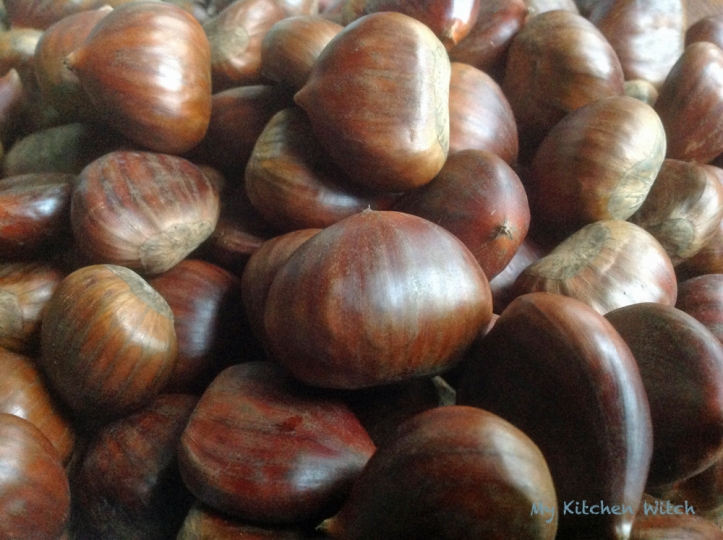 What to do with this plethora of chestnuts? I love maron glacé, chestnuts slowly poached in a vanilla syrup where they almost become candy. But, this is a long and tedious process that tries my kitchen patience. Also, most of my chestnuts tend to disintegrate into small pieces in peeling or poaching – thereby creating a null result on maron glacé making. But, the process gave me the idea of creating my own sweet chestnut purée. Now, this can be purchased in expensive little tins, but homemade is much more economical, easy to make and just as yummy (if not more so). I use it in all sorts of desserts, often in the simple form of the classic Monte Blanco -simply a mound made by extruding threads of sweet chestnut purée topped with cream or a dusting of powdered sugar to resemble the snow capped Alpine mountain it is named after.

Sweet Chestnut Purée
Depending on how many chestnuts you have, the quantities can be multiplied (or divided).

First put score the chestnut shells with a sharp knife or slice down one ridge along the side. 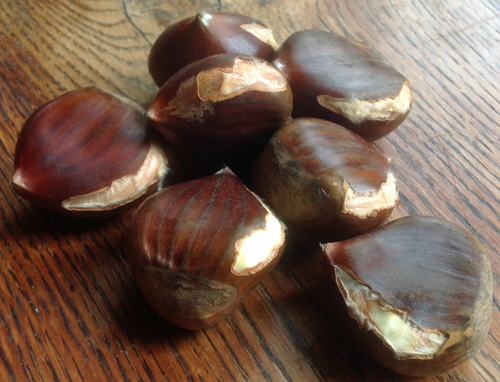 Put the chestnuts into a large heavy bottom pot and cover with water. Bring to a boil and let them cook for about 10 minutes.

Take off the heat. Remove a few chestnuts from the pot at a time to shell and peel off the dark skin surrounding the chestnut flesh. Leave the rest of the chestnuts in the hot water until you are ready to shell and peel more. Some may break up into pieces and some bits of skin may cling, but don’t worry about it at this stage. Set these aside in a bowl while you make the light syrup. 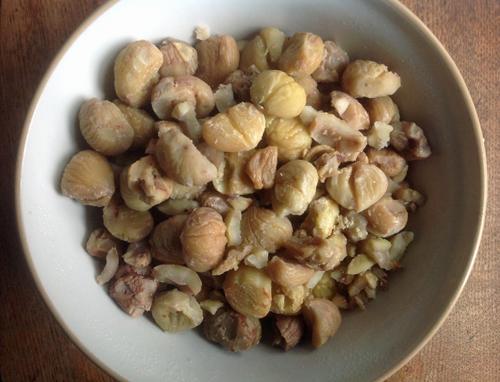 Put the 500ml of water, the sugar and a split vanilla pod or the vanilla extract in a large heavy bottom pot. Bring to a boil and let it cook for a few minutes until it forms a light syrup. Add the chestnut pieces, stir and lower the heat.

Let this simmer for 2 to 2-1/2 hours until the chestnuts begin to disintegrate, stirring every so often to prevent them from sticking to the bottom of the pot. You may need to stir more frequently near the end as the mixture thickens. Turn off the heat when the chestnuts are very soft and have partly reduced to a pulp. 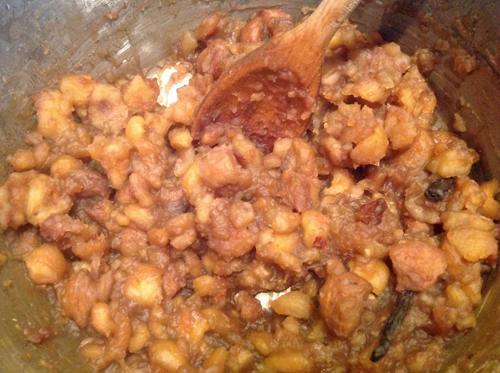 Let the chestnuts cool, remove the vanilla pod (if using), and then purée it in a food processor, adding a little water if it is too thick.

Press the purée through the fine-holed plate on the food mill (mouli) to get a finer texture and to remove all those little pieces of dark skin that didn’t come off in the initial peeling.

Wrap tightly in clingfilm in packets of 250g and further place in a plastic container or bag to be frozen until required.