Peppers in the Pot

One of my sister’s and my oldest memories of our grandmother’s cooking is her Pepper Pot soup. She would make huge vats of it and deliver it to our house along with loaves of home made bread. Although, she would sometimes vary her kitchen offerings with casseroles of pork chops and sauerkraut made with apples and caraway seeds, trays of lasagne (from a recipe she got from a Sicilian-American friend), home churned peach ice cream (in season), and “wet-bottom” shoofly pies made with sweet gooey molasses sandwiched between the crumble cake top and the flaky crust below. She simply loved to cook and feed the family. We lapped up everything, but our favourite was always that big pot of Pepper Pot soup. 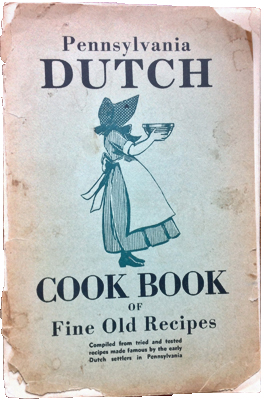 We never understood why the soup was called Pepper Pot since there was no visible evidence of peppers – green, red, yellow, sweet or hot. But, with a little bit of Internet research, I had my answer. I discovered our version of Pepper Pot soup is one of two American regional soups with the same name. The one we were familiar with dated back to Colonial times and is known as Philadelphia Pepper Pot Soup. In my grandmother’s copy of Pennsylvania Dutch Cookbook of Fine Old Recipes (seen above), Philadelphia Pepper Pot Soup contained cayenne pepper as a seasoning – no doubt the origin of “pepper” in the title. The second tradition of Pepper Pot soup is a spicy specialty of Creole and Caribbean cooking and does contain visible peppers – green, red or even hot scotch bonnet.

Philadelphia Pepper Pot Soup – a family variation
A traditional element in both the Philadelphia and Creole Pepper Pot is tripe. However, my grandmother substituted a cheaper cut of beef for the tripe and (of course) made her own rich brown stock. I vaguely remember my grandfather’s aversion to tripe, which probably explains the substitution. For this recipe, I’ve consulted her Pennsylvania Dutch cookbook and cudgelled my memory for her personal modifications to the soup. One obvious ingredient she added that did not appear in the original was tomato paste (or ketchup as a substitute!). My Pepper Pot uses her variation plus the homemade stock and noodles that are – in my opinion – what make the soup special.

The Stock
Make the stock at least a day before you make the soup. It is a two step process – first roasting and then a slow simmering.

Preheat the oven to 200 degrees C (400 degrees F). Cut the meat into chunks, removing any large pieces of fat. Chop the celery, carrots and onion in small dice – known as mirepoix. Cut the tomatoes into quarters and mash the garlic with the side of a broad knife. Add all of these ingredients to a roasting pan, tuck in the bay leaves and sprinkle on the thyme, salt and pepper. 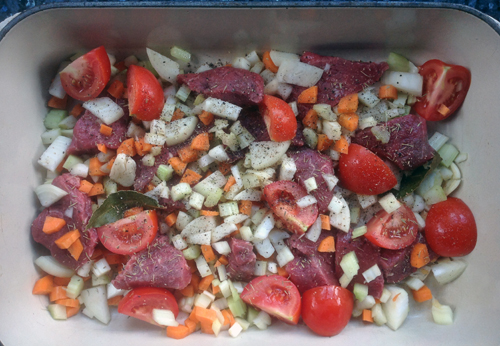 Roast for 30 to 40 minutes. Check and stir periodically to make sure the meat and vegetables do not burn. Remove when they are well browned. Scrape everything from the roasting pan, including the browned bits commonly known as fonds (but more accurately sucs) from the bottom of the pan, into a large stock pot. Deglaze the roasting pan with a little bit of the water. Add this and the rest of the 3 litres of the water to the stock pot. Bring to a boil, cover and turn down to a simmer. Simmer for approximately 5 hours. About half way through cooking, test for seasoning – add salt, if necessary. Since this is a slow cook, it is best to use a heat diffuser if you have one.

Strain the stock, reserving the meat and discarding the other solids. You should have approximately 2 to 2-1/2 litres of stock. Set some aside for making the noodles (see instructions below). Shred the beef and set this aside for the soup.

The Noodles
These should be made at least several hours before you assemble the soup so that they have a chance to part dry.

Put the flour and salt in a bowl, pour just enough cold stock (made the day before) to make a pliable dough ball. You probably will not need all 100ml, so start with a little and add more as required. Place the dough ball onto a floured board and knead for a few minutes until the dough is no longer sticky. Cover in clingfilm and let it sit for about 20 to 30 minutes.

Cut the dough in half. On a large floured board, roll out each half of dough to a thickness of 1 to 2mm – slightly thicker than pasta noodles. Cut with a sharp knife or a pizza cutter into 1cm wide strips and then into rough squares or rectangles. Set these aside on a lightly flour-dusted tea towel to slightly dry for a few hours. Turn over at least once during this time. 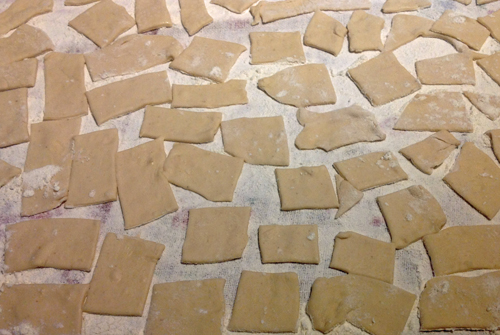 Put the stock in a large pot with the tomato paste and put on medium heat. While waiting for the stock to heat, peel and cut into dice the waxy potatoes. The dice should be same size as for a chowder. If using fresh marjoram, strip the leaves and finely chop.

Stir the stock to make sure the tomato paste has been incorporated, then add the potatoes, bay leaf, marjoram, and cayenne pepper. Be cautious with the cayenne as 1/4 teaspoon could be too hot for many – start with a pinch and then taste before adding more. Add the shredded beef. Bring to a boil, turn the heat down, cover and let cook for about 20 minutes so that the potatoes become soft.

Remove the lid and bring back to a gentle boil. Gently shake the excess flour off the noodles and slip these into the hot soup. It should take about 3 to 5 minutes for the noodles to cook. Ladle into bowls and serve with crusty rolls or bread.

Postscript:
It has been a long time since I had Pepper Pot soup, but this did strike a few cords with the memory of my grandmother’s soup. However, I think that next time I will add my bit to the family tradition by including more vegetables to the soup – perhaps carrots, peas or broad beans, and possibly even kale in addition to the potatoes – making it a more well-rounded meal and less “meat n’ potatoes”. The rich spicy stock and the comforting home made noodles, however, are definitely keepers.