A Tale of Two Soups

Many years ago and a continent away, I was given a recipe by a lovely American-Turkish woman whose family’s ethnic roots lie in Northern Iran. She and another of my husband’s colleagues had gathered at our house (then in the USA) one academic break in early spring to finalise a book they were writing together. For lunch one day, I served them a hearty lentil soup. This precipitated a fulsome soloquy on the splendours of Persian Ash or Spinach-Coriander (cilantro as it is referred to in America) soup. And, without further ado, this lovely lady reached for a pad of paper and wrote the recipe out from memory. 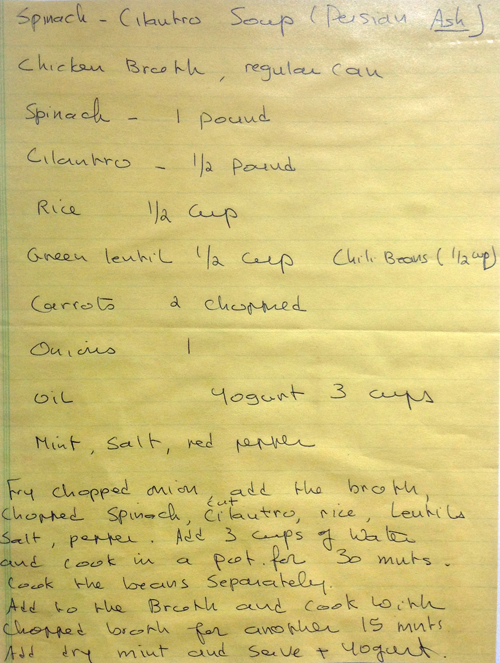 Since that time, her Persian Ash has become a family favourite, though I sometimes leave out the chilli beans and simply add a bit more lentils. I also serve it with a a dollop of thick Greek yoghurt stirred with chopped fresh mint instead of adding dried mint to the soup. So, when looking through Saha, that Lebanese and Syrian classic cookbook by Greg and Lucy Malouf, it came as a mild surprise to see a similar soup. However, right there at the preface to the recipe, the Maloufs indicate that though their soup is based on a Bedouin version, many variations of soups with the spinach-lentil-coriander trio appear throughout the Middle East. Of course, I had to make it – for comparison purposes, but also for the cookbook blogging club, The Cookbook Guru, who are reviewing the Maloufs’ book this month.

Spinach, Lentil and Lemon Soup, Bedouin-style
Despite the terribly unphotogenic properties of this soup, it is packed full of flavour. And, that’s the main attraction, although I always try for a pleasing presentation – a feast for the eye as well as the palate. I’ve made one substitution – green lentils for the brown ones listed in Saha.

First, make the Taklia by thinly slicing the garlic and lightly frying it in the olive oil. When it is just beginning to turn color, put the garlic and oil into a mortar. Add the ground coriander and salt, pounding with the mortar until you have an aromatic paste. Set aside.

For the body of the soup, heat the 3 Tablespoons of oil in a large pot and sauté the finely chopped onion and crushed garlic. When the onions are beginning to turn transparent, add the lentils to the pan. Stir, then add the water. Bring to a boil, turn down the heat and let it simmer for about 30 to 40 minutes for the lentils to soften.

When the lentils are soft, add the spinach and coriander. You will probably need to add more water at this point as it is quite likely that the soup has become too thick. Add the juice from the lemons. Cook until the spinach wilts.

Liquidise the soup. I used a hand blender. Stir in the Taklia. Test if the soup requires more seasoning. In a small frying pan, toast the pine nuts over medium heat until golden. Serve the soup with a sprinkle of pine nuts and optionally a few more coriander leaves.

Comparison Notes:
Both soups are wonderful in their own right (and packed full of iron!). My Persian Ash recipe is chunky – not liquidised – and has the additions of carrots and rice, making it a more substantial soup. The Maloufs’ recipe, on the other hand, is very flavoursome, mainly from the lemon juice and the aromatic Taklia. All things being equal, I prefer the taste of the Maloufs’ Bedouin version, but would add the mint-yoghurt topping (in addition to the toasted pine nuts, of course!). The best of both versions!