Autumn is in the air here in the UK and my thoughts turn to comfort foods – simple rustic foods that warm and sustain, that feed the soul. For me, that means getting Susan Loomis’ book, French Farmhouse Cookbook, off the kitchen shelf and paging through for earthy Puy lentils with bacon, silky smooth pumpkin and chestnut soup, tender duck baked with prunes, hearty potato ragout with green olives, slow-cooked sticky onion marmalade for tarts and flatbreads, and dense dark walnut bread.

Don’t get me wrong, this book has a wealth of other seasonal French farmhouse delights like Les Pêches Assaisonnées (a herb seasoned peach accompaniment for roasts), lamb stew with spring vegetables, or zucchini gratin and slow-cooked red peppers with tomatoes and garlic making the best use of summer veg. But, it is these cold weather recipes that keep me coming back to this book when the days close in and the nights get longer and cooler.

The book also offers a selection of pantry goods (another obsession of mine) – sweet and savoury preserves, meaty rillettes and confits, a wide variety of homemade liqueurs, country breads, and a brilliant tutorial on making your own wine vinegar. It sparks the hoarding instincts that the weather brings. Remember the chidren’s story based on Aesop’s Fables of the industrious ant and the indolent grasshopper? Well, I’m like those ants – busily scurrying around stocking my pantry for the winter. It is no wonder that those particular pages of the French Farmhouse Cookbook are splattered, smeared and dog-eared.

I could go on and on about the fabulous, flavourful food, but interspersed with the recipes, or often prefacing them, Susan Loomis has wonderful vignettes – word pictures that bring the French countryside to life. Some of these little stories are all about particular ingredients – l’ail Rose Lautrec (rose-coloured garlic), La Rochelle mussels, “pearls of the north” (Belgian endive), Fleur de sel, the small reine-claude and mirabelle plums, the blue-footed white-feathered Poulet de Bresse, and many more special foods. Or, the stories are about the people who work the land (and sea) – the paludier (salt raker), the hydroponic farmer, the cheese maker, the farmer’s wife, the the expert foragers and hunters. She also touches on traditions and reflects on her memory of visiting many of the places and people she writes about. Finally, there are useful bits of information (how to peel a chestnut, all about French flour, etc.) and tips for cooking – little astuces.

Susan Loomis, an American by birth, lives in Normandy where she runs a successful cooking school – On Rue Tatin. She’s also written about her life there in two books (with a few more recipes): On Rue Tatin: The Simple Pleasures of Life in a Small French Town and Tarte Tatin: More of La Belle Vie on Rue Tatin. I can recommend both of these as good reads along with her French Farmhouse Cookbook. It is one of those cookbooks that can both be cooked from and enjoyably read.

Hazelnut & Honey Spread
Autumn is hazelnut season and what could be better than a simple nut and honey spread for toast. It’s also a healthier alternative to that well-known sugary chocolate and hazelnut product. I’ve modified the proportions somewhat, but the basic recipe is from Susan Loomis’ French Farmhouse Cookbook. Simply two ingredients: roasted, blitzed, and spread!

Preheat your oven to 350 degrees F. (180 degrees C). Place your hazelnuts on a large, shallow baking tray. Roast for approximately 10 minutes until they are beginning to brown.

Place the warm hazelnuts on a clean tea towel, fold over the ends and roll the cloth to remove the skins.

Put the skinned, roasted hazelnuts in the food processor and grind them finely. Add the honey and continue processing until you have a thick, slightly nubbly spread. 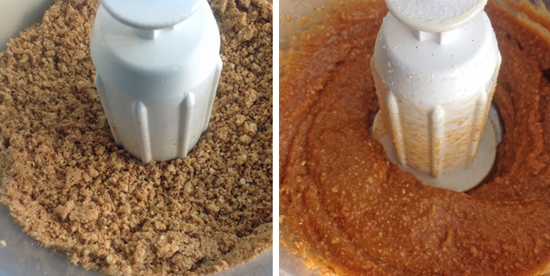 Pot up into jars. It will keep well in the refrigerator for many months – if it lasts that long!