Around My Edible Garden

Plums – more specifically my small purple damsons – are ready to harvest. Before I picked them, I’ve wracked my brains trying to think what to make this year. Jam, for certain, but this will only use a portion of the crop. I made a Georgian plum vodka one year with damsons, but still have plenty of this left (indeed it is now fully mellowed with age). I know many people in the UK make a damson gin, so that’s a possibility. I’ve also made another English speciality, damson cheese, before – that concentrated paste of damson pulp thickened with sugar that is cut and served with cheese. I will probably do more of that. Perhaps some fruit roll-ups as I’ve been e-shopping for a dehydrator. And, somewhere – perhaps in Nigel Salter’s book, Tender Volume II or one of my many Eastern European recipe books – damsons are used in savoury dishes. Well, I guess I can’t put off picking the crop.

Nearby are the fuzzy quinces – still growing with a month or more to go before they are picked. Going by the number of fruit on the tree, I’ll have a smaller crop this year, but still enough to make sweets, pickles and to cook a few up with lamb or pork. As you can tell, I think if my garden as an extension of my larder – always thinking of what to cook.

The second cropping of raspberries is just beginning – these ones on this year’s canes. They are generally taller canes that produce larger berries.

My new thornless blackberry vine is also beginning to turn colour – soon ready to pick. There are so few this first year, I might just use them in an apple and blackberry pie or crumble.

The grapes had reached that stage of plump unripeness that I knew it was time to harvest and finally make that verjus – which is also sometimes spelled verjuice. After doing some research on the subject of how to produce verjus (which is mind boggling in its variations), I settled on a traditional French method that some say dates back to the 18th century, although it is possible that it is even older. See my post on Victoire’s Verjus for the full story and the recipe.

Several of the herbs have started to go to seed. The most spectacular is the fennel, now towering over 8 feet in height. When the seeds get a bit bigger and slightly dry, I’ll collect them for seasoning. The parsley and its cousin, celery leaf, have also bolted. It is the second year for these biannual plants. I’ll be collecting some of the seeds for sowing next year. 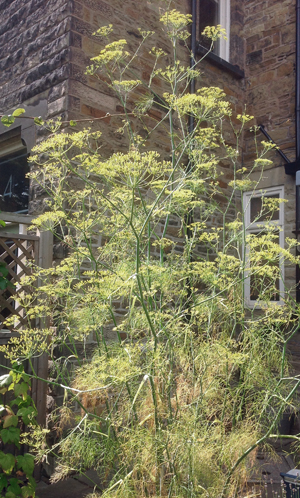 Half harvested! More to be picked, processed and preserved. 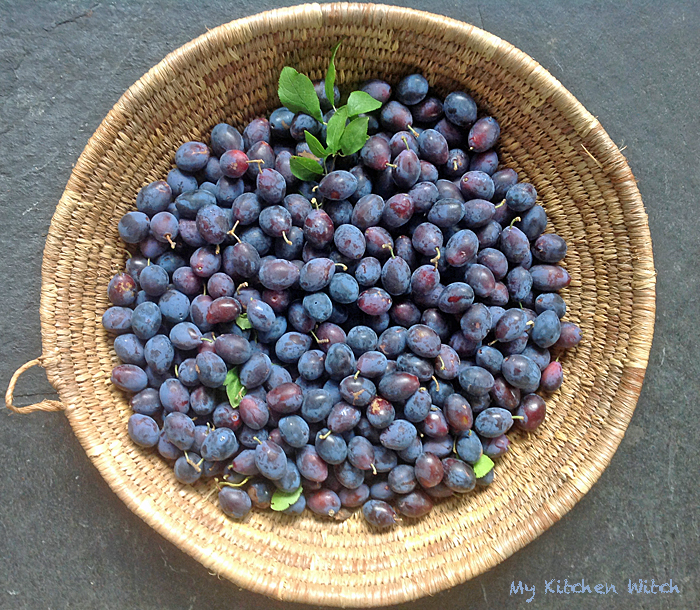 Tasks to be done: