In My Boulangerie Kitchen

Why is it that French terms – at least applied to food and cooking – have more of a posh gloss than English ones? You don’t need to answer that, it’s just a rhetorical question. Boulangerie is so much more chic than plain ordinary Bakery (at least to this English speaker). Hence, the title of my post – to give a little more cachet to all that messy, floury, yeasty, sticky-doughy, crumby bread making activity in my kitchen over the past month – that is, when not occupied in the garden. 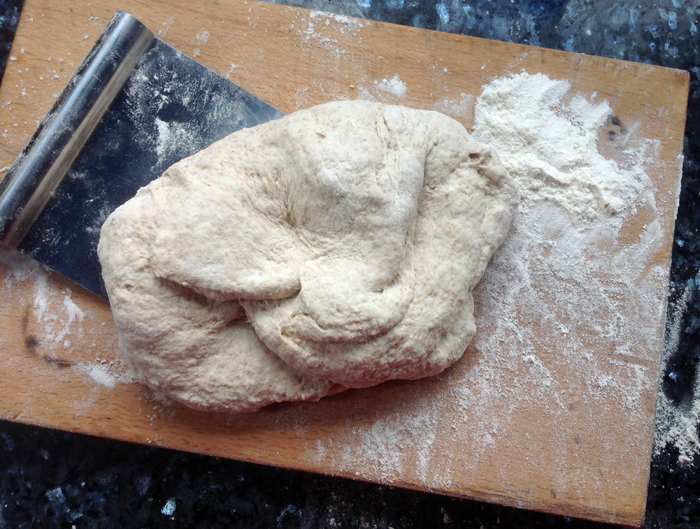 The cookbook blogging club, The Cookbook Guru, is partly the reason. June’s book under review was English Bread and Yeast Cookery by Elizabeth David. Despite the title of the book, Elizabeth David managed to slip in French baked goods, like a bread version of petit pain au chocolat, in her very English book. More of that posh gloss?

But, I also made a regional English “bread” or rather a yeasty griddle cake known as bockings in Elizabeth David’s book. These are yeast leavened buckwheat pancakes very similar in texture to crumpets and traditionally served for afternoon tea, sprinkled with brown sugar.

Summer has finally arrived here in Britain and it was time to make that sourdough starter. I’ve put it off too long, making do with dried yeast and a quicker preferment starter (only 10 hours versus 10 days to make!). Many, many years ago, I had made a sourdough starter when we lived in the US, but sadly, it had to be given a new home when we moved to Britain – those pesky customs regulations! And, when we lived in Oxford, given the presence of several good bakeries in town, it never occurred to me. Finally, in northern England, I knew it was time. I created a levain starter described by Daniel Leader, but added a Greek twist. Based on Greek folk custom, a sprig of basil that has been blessed in church is often inserted with the starter – perhaps superstition, but possibly part logic. Since I had a blessed sprig of basil, I thought I’d give it a go. It worked – as I explained in my post, The Basil Effect.

And, I settled on a perfect method of baking that sourdough. Ever since Celia@Fig Jam & Lime Cordial posted her experiments on baking bread with her cast iron casserole and her Römertopf, I’ve been baking this way quite regularly – with a little steamy adjustment of my own by spraying with water before putting the lid on. I do like a nice crisp crust and a chewy texture. Plus, Celia’s cold pot/cold oven solution is an improvement over that technique that became popular a while back, preheating the pot, gingerly manhandling it out, plopping the dough in, and wrestling it back into the oven, all the while trying not to get burnt. (Blisters are neither pretty nor painless!) It’s put my oval Le Cruset pot back in action after languishing in the cupboard. It had been superseded by a round one that was better suited to fit the stove-top hob. But, the oval shape is perfect for a loaf of bread.

I find my cooking/baking more and more inspired by other bloggers … hence these Scottish oatcakes posted by Sandra@Please Pass the Recipe. As an experiment, I modified her recipe somewhat, using oat flour and pinhead oats in place of her rolled oats. Although I had to compensate for the less absorbent pinhead oats by adding more flour, they turned out well – very moreish. However, I will probably return to Sandra’s more accessible recipe with rolled oats next time I make these. And, there will be another time if my husband has anything to say in the matter! 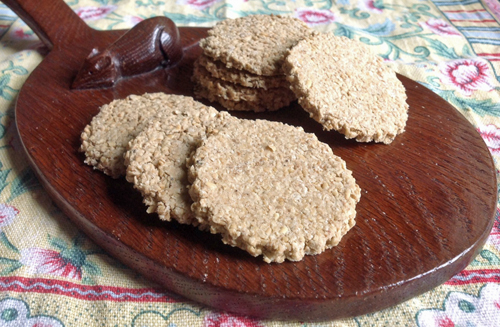 Then there was my variation of thyme and seed pīde that Selma@Selma’s Table posted a little while ago. My version was topped with a smear of tapanade, roasted courgettes and tomatoes, and goat’s cheese. The family voted these a definite thumbs up, so it is now going onto the list of our regular supper repertoire. Although, I really must try it with Selma’s leek topping next time.

And, just because I happened to have the correct amount of leftover cold cooked new potatoes, I made krumkaker’s sourdough loaf with potato. With thin slices of prosciutto, this bread studded with pieces of potato gave new meaning to “meat n’ potatoes”.

To top it all, I seemed to have acquired two new bread books this past month – Daniel Leader’s first book, Bread Alone and Richard Bertinet’s Dough. Between the Leader’s rye sourdough starter used to make a Danish light rye bread and Bertinet’s Parmesan & Parma ham rolls, I’ve made a good start in using both of these books. 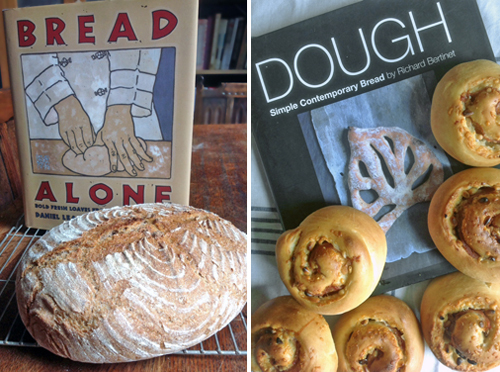