A while ago, I was out in my garden taking photographs to include in my April segment of my diary post, Around My Edible Garden. One image – the newly opening purple flowers of the rosemary bush – started a train of thought around the color purple.

But, I need to backtrack a little. Just before taking that photo, I started seeing people posting lovely cakes using rosemary flowers, often showing stunning photographs of the the purple beautifully decorating the snow white icing. Striking a note somewhere in the back of my mind was the use of another purple flower in cakes – lavender. True enough, there was Diane Henry’s recipe for lavender, orange and almond cake in her fabulous book, Crazy Water Pickled Lemons. In fact, in the introduction to her chapter Fragrance of the Earth, she talks about producing lavender sugar by taking the tiny flowers and grinding them up with granulated sugar in a coffee or spice grinder to produce what she calls a floral icing sugar. So, that immediately brought me back to rosemary and rosemary sugar.

Naturally, after the rosemary sugar was made, a cake was called for. Again, Diana Henry to the rescue with her recipe for lemon and rosemary cake which inspired me to create a lemony cake using my newly made rosemary sugar.

Rosemary Sugar
Make this at least 2 weeks before use. Since rosemary flowers do not dry like lavender – the latter keep their color and shape; the former don’t – I suspected making rosemary icing sugar using Diane Henry’s lavender sugar method would result in tiny brown specks in the sugar – very unaesthetic and unapetizing. I opted instead for a simple infusion, like vanilla sugar, with the remains of the dried and browned flowers sifted out.

Pick flowers from the rosemary bush on a dry day. Place them in a bowl of the sugar and mix. Spoon into a jar with a closely fitting lid, leaving a little headspace so that the sugar can be shaken occasionally. Leave to infuse for at least 2 weeks or more for a stronger flavor. Over time the flowers will have lost their purple color and turn brown. Sift out the flowers. 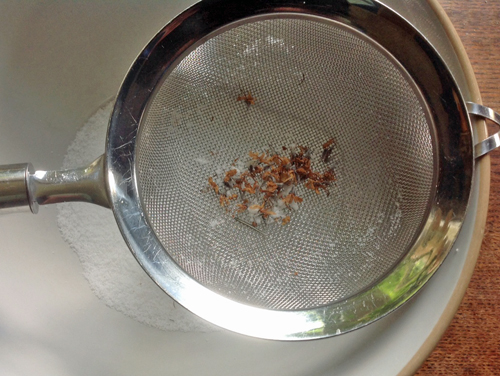 Keep the sugar sealed in a clean jar until use. The sugar produced has a delicate hint of rosemary, more floral than piney. It can be used in any sort of sweet such as cakes, cookies, ice creams and sorbets, or just sprinkling on fruit – to name a few uses that immediately come to mind. One option is the following Lemon, Polenta & Rosemary Sugar Cake.

Was it worth picking all those little flowers, waiting for the sugar to infuse, sifting out all the unsightly browned flowers? See my answer below after the cake recipe. 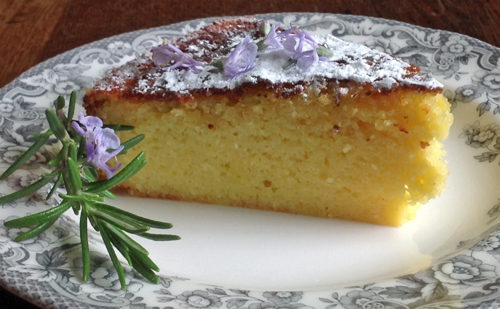 Lemon, Polenta & Rosemary Sugar Cake
This recipe, like Diane Henry’s lemon and rosemary cake, is based on a traditional syrup-soaked Tunisian polenta cake. It is not a unique recipe as many other cooks have produced similar cakes. But, I have modified it by substituting the oil normally used for a mixture of butter and yoghurt. Because it does not contain wheat flour, it has the benefit of being gluten free. It can also be made substituting the rosemary sugar for castor sugar to produce a simple Lemon Polenta cake.

Preheat the oven to 350 degrees F. Prepare an 8-inch springform baking pan by lining the bottom with baking parchment and buttering the bottom and sides. Dust with a little extra polenta. Set aside while you make the batter. 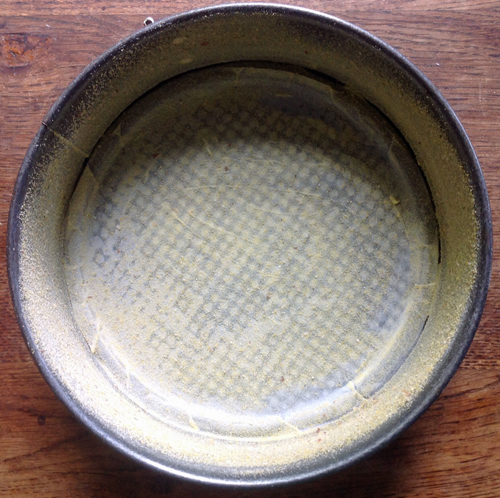 In a mixer with the paddle attachment (or in a bowl by hand), cream the sugar and butter together until smooth. Add the eggs, one at a time – incorporating after each addition. Add the yoghurt. Measure out the polenta, ground almonds and baking powder. Zest and juice the lemon, setting the juice aside for use in the syrup. Finely chop the zest. Add these dry ingredients and the zest to the liquid mixture and process until incorporated. The batter will be slightly grainy due to the nature of the polenta and almonds. Pour this into the prepared pan.

Bake for 35 to 40 minutes. Meanwhile make the syrup.

Put all of the ingredients into a saucepan and bring to a boil. Turn down the heat and let gently simmer for about 5 minutes to create a light syrup. Take off heat and let it cool slightly.

Take the cake out of the oven when done – test by inserting a knife into the center. If it comes out clean, it is done. Let it cool on a rack while still in its tin for about 10 minutes. 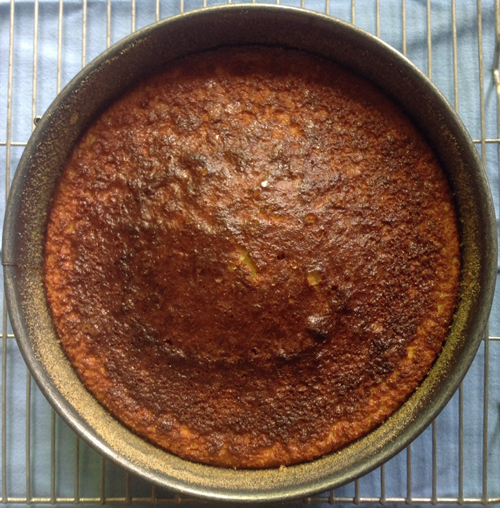 Remove the cake from the tin and place it on a serving plate. With a skewer, pierce the top of the cake all over. Pour over the syrup while the cake is still warm. Let cool completely before cutting. Dust with confectioner’s sugar just before serving.

Was it worth picking all those little flowers?

I would have to say, a provisional yes. It was easy enough to collect the rosemary flowers. It produced a lovely scented sugar, but it was very subtle – almost too subtle when baked. The flavor of the rosemary in the lemon polenta cake was mild, but the lemon was more prominent.

The cake, being mostly ground almonds (and soaked in syrup), kept its moisture very well and actually improved upon resting. A good cake to have in mind when you need to save time by preparing a dessert the day before – with or without the rosemary sugar. Next to try are peaches poached in a rosemary sugar syrup to see if the herb flavor comes through.

I probably will make rosemary sugar again, but (out of personal preference) add a sprig or two of rosemary to punch up the intensity of the herb in the sugar. Or, if I’m really being lazy, I might just cheat by infusing the sprigs instead of the flowers, no matter how alluringly seductive and prettily purple they may be. They can be saved for decoration. 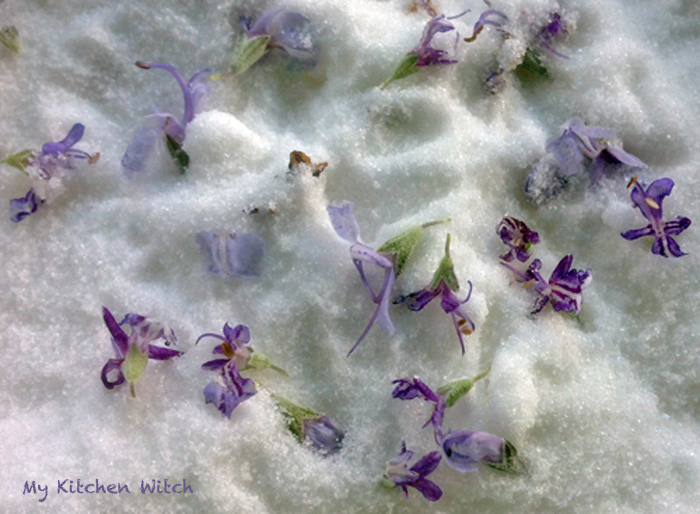