Anyone for Lemon Barley Water?

While reading through the original 1861 edition of Mrs. Beeton’s Book of Household Management, I found myself more drawn to Isabella Beeton’s commentary and asides than the actual recipes. The recipes are, for the most part, plain British cooking – interesting in a way many historical recipes are. But, those little anecdotes, factoids, and excerpts from other publications, were packed with amazing trivia, providing insights into 19th-century attitudes towards food, cooking, dining and other household activities. In the chapter on Beverages, I spotted an interesting note on lemonade that turned out to be a health warning in the form of a cautionary tale.

Isabella Beeton’s aside on lemonade was a quote from Jean Anthelme Brillat-Savarin (see the end of the post for the complete text). It most likely came from a translated edition of his book, The Physiology of Taste, first published in 1825 as Physiologie du goût. Brillat-Savarin, a French lawyer practicing at the end of the 18th century, acquired fame as an epicure and gastronome from this treatise on food. Indeed, the phrase “you are what you eat” is attributed to him and many culinary terms have been named after him, such as the Savarin cake made in a Savarin mould. Since many of his opinions were considered sacrosanct, it is small wonder Isabella Beeton quoted him frequently – on oysters, raw meat, roasting fowls and pheasant, omelettes, fondue, lemonade, and the civilized art of dining. And, I suspect there are many unattributed “borrowings” from Brillat-Savarin throughout Mrs. Beeton’s Book of Household Management.

Although she made no comment on Brillat-Savarin’s opinion of lemonade, Beeton placed it immediately after several lemonade recipes. I suspect she approved of the beverage, but felt required to include the quote from that arbiter of taste. This suspicion was confirmed when I noticed Beeton also included several similar lemonades in the Invalid Cookery chapter as healthy drinks for the sickroom! In addition, the chapter Invalid Cookery contained recipes for barley water made with lemons, similar to lemonade except for the addition of barley. Barley water was considered to be “nutritive”, pleasant to drink by those who are ill, and enlivened by the addition of lemon. Not surprisingly, Brillat-Savarin’s warning on the drinking of lemonade did not transfer to the 1907 edition, but the recipes for lemonade did – in both chapters.

We think of barley water today as an energy drink, or even a sports beverage, particularly with that hit of citrus vitamin C. In fact, like strawberries and cream, barley water is a fixture at Wimbledon. And, since the lawn tennis tournament is due to begin in a little over a month, there is plenty of time to mix up a batch of this British drink for a British event. 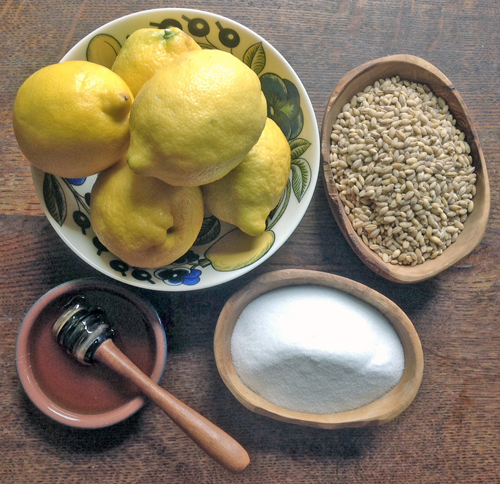 Lemon Barley Water
The blogging book club, The Cookbook Guru is testing recipes this month from the Beeton oeuvre. This one is inspired by, not recreated from, recipes contained in both the 1861 and 1907 editions of Mrs. Beeton’s Book of Household Management. The second recipe from the 1907 edition (shown below) is the closest to the version in the 1861 edition which produces a concentrated syrup.

Rinse the barley in a sieve with cold water and put it into a large pot. Add the water and bring it to a boil on high heat. Put the lid on, lower the heat, and simmer for 30 minutes.

Meanwhile, zest and juice the lemons, discarding the pith. Set the juice aside. After the barley has cooked for its initial 30 minutes, add the lemon zest, stir and replace the lid. Let it simmer for a further 30 minutes.

Take the barley off the heat. Over a large bowl, strain through a sieve, pressing down with the back of a wooden spoon to extract as much liquid as possible. The barley will be quite mushy by this time. Discard the barley and zest solids. Clean the pot and return to the stove. Put the barley liquid back into the cleaned pot, add the sugar and bring it to a boil. Turn down heat slightly and let it gently boil until it reaches a light syrup stage (approximately 5 minutes).

Turn off the heat. Put the hot liquid back into the bowl and add the honey and the lemon juice. Stir until mixed. Let cool, bottle and chill in the refrigerator. Sediment may form – simply shake the bottle before pouring. Serve with ice and dilute with cold water (still or fizzy) to taste. The mint sprig is entirely optional!

Notes & Evaluation:
1. I’ve modified the recipe to combine lemonade with barley water to get a concentrated lemon barley water. As a result, I’ve added more lemons and more sweeteners – adding honey, which was not included in any of the original recipes.
2. Ginger (fresh) and/or mint are also natural ingredients in lemon barley water and can be added with the honey and lemon juice.
3. Brillat-Savarin’s The Physiology of Taste is available in translation from the Internet Archive. It is an interesting read, filled with long anecdotes, but not an easy read. For the dedicated student of culinary history!
4. A short while ago, the blogger Vintage Cookbookery wrote an interesting post on Brillat-Savarin and his The Physiology of Taste.

LEMONADE—”There is a current opinion among women” says Brillat Savarin “which every year causes the death of many young women,—that acids, especially vinegar, are preventives of obesity. Beyond all doubt, acids have the effect of destroying obesity; but they also destroy health and freshness. Lemonade is, of all acids, the most harmless; but few stomachs can resist it long. I knew, in 1776, at Dijon, a young lady of great beauty, to whom I was attached by bonds of friendship, great, almost as those of love. One day, when she had for some time gradually grown pale and thin (previously she had a slight embonpoint), she told me in confidence, that as her young friends had ridiculed her for being fat, she had, to counteract the tendency, been in the habit every day of drinking a large glass of vinaigre. She died at eighteen years of age, from the effects of these potions.”
– Mrs. Beeton’s Book of Household Management (1861)