The Cookbook Guru has really picked a brilliant source of social history with Mrs. Beeton’s Book of Household Management for review this month. The book was first published in 1861, although it had originally been serialised from 1859 to 1861 in the Englishwoman’s Domestic Magazine. The magazine, operated by Mrs. Beeton’s husband Samuel, was the first widely circulated periodical aimed at middle class women that did not simply contain tips on fashion or moralizing tales. The magazine contained practical information on any number of topics, including those that would result in the book of household management – economical food production (with costs), proper seasonal menu planning, managing servants, curing common ailments, rearing children, and home legal aid regarding property. 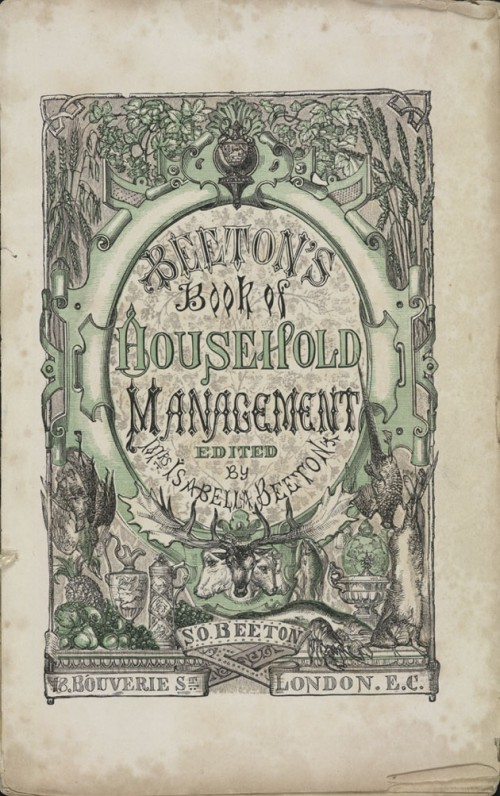 The entries for the original book were compiled by Mrs. Isabella Beeton from various sources (not least Eliza Acton’s 1845 Modern Cookery and Alexis Soyer’s 1849 Gastronomic Regenerator) and from contributions by the magazine’s readers. Isabella Beeton, who was then in her 20s, was not a cook or an authority on any specific subject, although she certainly possessed an authoritative writing style. She could best be described as a phenomenal journalist and editor. After Beeton’s early death at age 28 in 1865, the rights to the book were sold to the publishers Ward Lock who proceeded to produce various new editions. The most extensive edition appeared in 1907, modifying many of the original recipes and introducing new ones. Of course, more editions continued to be produced, trading on Mrs. Beeton’s name until nearly all the recipes from the original 1861 book were replaced by new ones and Isabella Beeton’s original and interesting commentary and asides had been removed.

Put altogether, these editions reflect the changing face of over a century and a half of British cooking. The 1907 edition significantly added an Edwardian genteel flourish for the upwardly mobile, dressing up what was once plain cooking, and included the affectation of French names for the recipes. Twentieth-century editions discussed tinned produce, freezers and pressure cookers – modern conveniences to go with the new modern recipes. Elizabeth David, writing in the 1960s, at the time of the centenary edition of The Book of Household Management (compiled by 55 different “domestic experts”), reflected on the derivative nature of the book in all its editions – from 1861 onwards. The best part, she thought, was the bossy, “governessy” voice of Isabella Beeton that was lamentably lost in these later editions. It was time, she felt, to move on, to write the obituary of the Beeton phenomena – Requiescat in pace – and put the old editions squarely in the section on culinary history.

Jam Turnovers
It was difficult deciding where to start with these books. I wanted something that appeared in the original 1861 book, but still appealed to the modern palate. This recipe in the 1907 edition (see image below) looked interesting, and is a variation on one listed in the 1861 book – so that met one criterion. Since they reminded me of Kellogg’s Pop Tarts, they met my “modern” criterion. In fact, I have seen various recipes on the internet that now call similar pastries “hand pies” – not much different from the 1907 Jam Turnovers except perhaps the cost to make, which is no longer a ha’penny apiece.

Rich Shortcrust Pastry
The recipe offers the choice of “rich short crust” or “puff paste”. I choose the shortcrust pastry and modified it only slightly. It is close (but not as sweet) as the one I used for a similar pastry – my “Fig Newton” Crostata.

Put flour, butter and sugar in the food processor. Turn on and off (“pulse” ) until the mixture looks like coarse crumbs. Add the egg yolks and mix, adding one Tablespoon of water at a time, until the pastry begins to clump. Place on floured surface, form into a ball with your hands and divide in two, creating two smooth balls which you then flatten slightly with your hand. Wrap each disk in greaseproof paper or waxed paper and store in the refrigerator for at least an hour before until you are ready to assemble and bake. The pastry can be frozen at this point and defrosted before use.

Preheat oven to 350 degrees F. (a moderate oven temperature) and prepare a baking tray by lining it with baking parchment.

Take one of the pastry balls and roll out on a lightly floured board to approximately 1/8 inch thick (or slightly thinner, if you can manage it). Cut circles. I used the largest of my scone cutters, which was about 3 inches in diameter – a slight bit smaller than the 4 inches mentioned in the recipe. Gather up any pastry scraps and roll out again to create as many circles as possible. In the center of the circle, spoon on a scant 1/2 spoon of jam, keeping clear from the edge. The choice of jam is entirely an individual preference. I used strawberry, apricot, and gooseberry jams to make three different filled turnovers.

Moisten the edges of the circles with water and fold in half, pinching the joins close and then pressing with the tines of a fork. Why the 1907 recipe defined these as triangles, I’ll never know – obviously written by someone unaware of geometry! They are best described as semi-circular or half-moon shape.

Place on a plate or tray for “dredging with sugar”. Brush the tops of the turnovers with water and liberally sprinkle with sugar. This is a messy process and you don’t want stray sugar on the baking parchment where it can caramelise and burn.

Carefully lift and place on the lined baking tray. Continue the process with the rest of the circles and bake for about 15 minutes until golden brown. Cool on a rack. The pastry is nice and flaky with a crunchy sugary glaze.

Notes & Evaluation
1. Digital versions of the original 1861 and 1907 publications of Mrs. Beeton are available from the Internet Archive – including a public domain audio version of the 1861 book.
2. Elizabeth David wrote at least two articles on Mrs. Beeton – one in The Spectator (21 October 1960) and the other for the Spring 1961 issue of Wine and Food. Both of these articles have been reprinted in her collection of essays, An Omelette and a Glass of Wine, published by Viking Press in 1982.
3. The original 1861 recipe indicated puff pastry only and made one large flat pie – much like a modern “slab pie” – and cut into “sandwiches” after baking, but basically the same ingredients and baking as these turnovers. However, because the turnovers are individually made and are provided with an alternative French name (Patisserie de Fruit), they could be considered slightly more upmarket – a characteristic of the 1907 edition.
4. According to Wikipedia, Pop Tarts were first produced in 1963 by Kellogg and called “Country Squares”; iced versions were introduced later.
5. Below is Mrs. Beeton’s potted history of pastry from the 1861 edition. It certainly sounds definitive, although its accuracy is debatable. But, what I find most interesting is the progressive development of pastry making – much like scholars of the time saw the linear progression of human history in stages from primitive to barbaric to civilised. I’m also far from convinced that the grandiose claims of pastry making are reflected in these prosaic jam turnovers.

“At a very early period, the Orientals were acquainted with the art of manipulating in pastry; but they by no means attained to the taste, variety, and splendour of design, by which it is characterized amongst the moderns. At first it generally consisted of certain mixtures of flour, oil, and honey, to which it was confined for centuries, even among the southern nations of the European continent. At the commencement of the middle ages, a change began to take place in the art of mixing it. Eggs, butter, and salt came into repute in the making of paste, which was forthwith used as an inclosure for meat, seasoned with spices. This advance attained, the next step was to inclose cream, fruit, and marmalades; and the next, to build pyramids and castles; when the summit of the art of the pastry-cook may be supposed to have been achieved.”
– Mrs. Isabella Beeton, Beeton’s Book of Household Management (1861)