These round, sesame-studded bread rings would be my breakfast of choice any day. In some parts of the world they are known as semit (also spelled simit). Semit is derived from an Arabic word for fine white flour – the same root as the word semolina. Claudia Roden in The New Book of Middle Eastern Food nostalgically describes them as an urban street food from her childhood in Egypt – sold by hawkers from large baskets or threaded on long poles. Roden certainly understands the powerful connection between memory and food, as similar reminiscences are woven throughout her book.

Just as strong as Roden’s childhood memory are mine from long ago of early morning sellers in Athens brandishing poles threaded with fresh, warm, fragrant sesame-studded bread rounds. More recently, they were impossible to escape in Thessaloniki where there seemed to be vendors’ carts at nearly every street corner, all selling a slightly thinner, crispier version than their southern cousins. 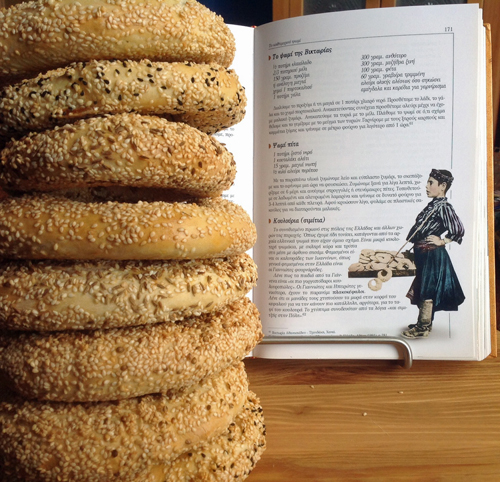 However, in Greece, these delicious sesame bread rings go by the name kouloúri (plural kouloúria), although a number of Greek cookbooks also acknowledge the term simíti (plural simítia). Kouloúri is from the Byzantine Greek word, κολλύριον, the name for a small round bread roll. Etymologically the name has interesting links to medicine, specifically in the field of ophthalmology – as an eye compress (a collyrium), originally a soft round bread soaked in a medicinal lotion. For more information, the Sweet Almond Tree blog has an interesting article on kouloúri. It would seem, given the antiquity of both names, sesame bread rings have been around at least from Byzantine and later Ottoman times – right up to the present day.

Semit – Kouloúria
This is one of my contributions to the blogging cookbook club, The Cookbook Guru who are testing recipes from Roden’s book this month. I’ve deviated somewhat from her recipe in the seed coating – both in the application method and the additions to the sesame seeds. I’ve also reduced the size of the kouloúri so that it can be more easily handled.

Make your bread dough by combining the flour, salt, yeast, 1 cup of water and oil in a mixer with a dough hook. Process on low speed until the flour has absorbed all the water. It may need more water, depending on the flour. Turn the speed up and mechanically knead the dough. The dough should wrap around the hook and lift from. the bottom of the bowl.

Remove the dough from the mixer and place in an oiled bowl. Turn the dough so that it is completely coated in oil. Cover with clingfilm and set in a warm place for an hour or two while the dough rises.

Preheat the oven to 425 degrees F. Prepare enough baking trays to hold 8 bread rings by covering them with baking parchment. Punch down the dough and place it on a flour dusted board. Cut into eight equal pieces. Roll each of the eight pieces into 18 to 20 inch long ropes. 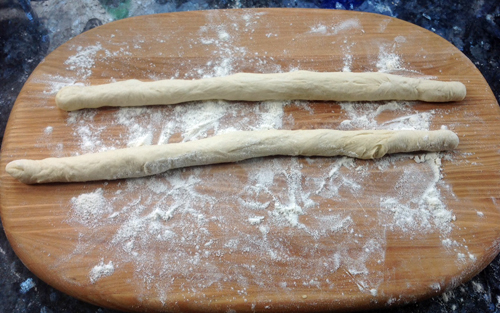 Wet the ends with a little water and attach them together, forming a ring approximately 6 inches in diameter, and pinch to seal.

Place them on the baking parchment covered trays, cover with a clean tea towel and let them sit for about 30 minutes. Meanwhile, beat the egg and water together in a wide shallow bowl. In another bowl, place your sesame seeds and any other seeds (one or more) you may want. Carefully lift the bread rings and lay it in the egg wash. Using a pastry brush or carefully turning over, coat the top. 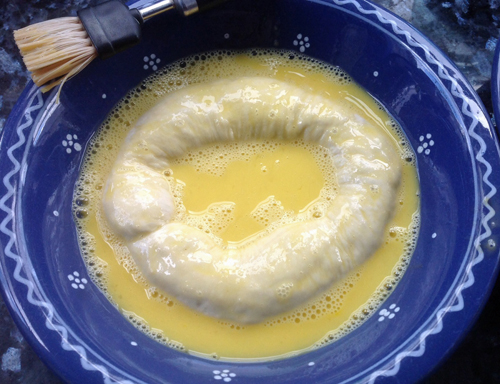 Take it out of the egg and lay it in the bowl of seeds, making sure to coat all over. I did this in batches, making two of the eight kouloúri plain sesame, two sesame and nigella, two sesame and coriander and two sesame and cumin. Roden simply applies an egg wash to the tops of the breads and sprinkles on sesame seeds. The kouloúria and semit I am familiar with are covered all over in seeds.

Place the bread rings back on the baking trays and place in the preheated oven. After 5 minutes, reduce the heat to 325 degrees F. for another 15 to 20 minutes. The bread should be golden and hollow when tapped. Cool on a rack – if you can resist the smell of warm bread and aromatic seeds. 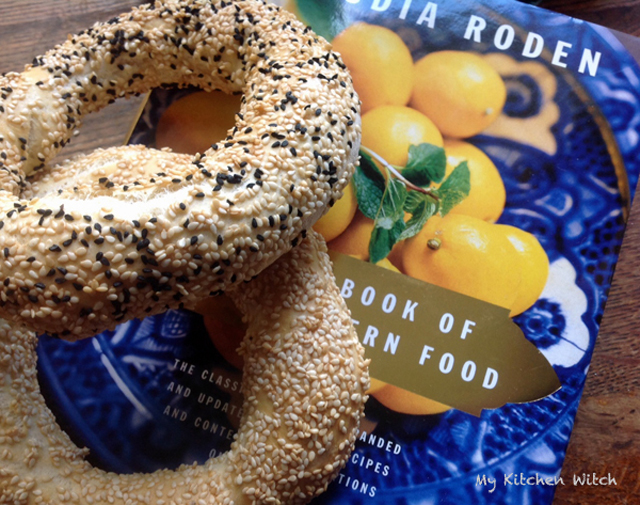 Notes & Evaluation:
Roden’s recipe for semit is a basic one, listing “ordinary bread dough” as her main ingredient. My bread dough varies little from the many other recipes I have found for either semit or kouloúria. Regional differences are known, but particularly in the size of the ring and the texture of the bread. I also have run across mention of the traditional use of “molasses” to adhere the seeds to the dough instead of an egg wash. The “molasses” referred to is almost certainly pekmezi, a concentrated grape must syrup – the standard “molasses” of the region. In some recipes, poppy seeds replace the sesame. In fact, this is what tempted me to add other seeds – nigella, cumin, crushed coriander – to the basic sesame. Nigella seeds are often called “black sesame” in Greece and are frequently paired with sesame seeds in baking. The cumin and coriander seeds are ingredients in dukkah (do’a), a spice mix Roden mentions was often eaten with the bread. In addition to reminiscences, Roden stresses the superstitious and religious feelings attached to bread in Middle Eastern cultures. She states: “To some it is, more than any other food, a direct gift from God.” Indeed, a meal would not be complete without bread on the table.

In making a second batch of semit, I used pekmezi (grape must syrup or “molasses”) to coat the bread rings and adhere the seeds. When baked, it added to the flavour somewhat, but remained a slight bit sticky. It also did not produce a shiny crust like the egg wash did. Given the difficulty in acquiring pekmezi (I make my own – a long and laborious process!), I think I will stick(!) with the egg wash process.