Goosegog: British slang for gooseberry, the round, slightly fuzzy, green or red sour fruit that grows on thorny bushes. It is derived from the goose in gooseberry + gog, a variant of gob meaning a mouth, mouthful or lump. Folk etymologies for the name of the fruit are inconclusive, none actually explaining “why goose?” in relation to the berry. Whatever their meaning, they grow in my garden as you can see below in the photo taken last summer.

Gooseberry is also a name for a fool, so appropriate as we approach April 1st. Fool has an alternate meaning as a creamy dessert, a conceit from an earlier time when sweets were given nonsensical names. Perhaps by coincidence, gooseberries make a classic British fool, or, if we’re being fanciful, a fool’s fool. That leads me to one of my favorite quotations from the Bard and a conundrum – is a fool foolish?

Layered Gooseberry Fool
I’ve used the last of my frozen gooseberries – both red and green – for this dessert, making space in the freezer for this year’s crop. And, instead of stewing gooseberries, as most recipes indicate, I make a smoother, richer gooseberry curd before folding into the whipped cream to make this bi-colored fool. 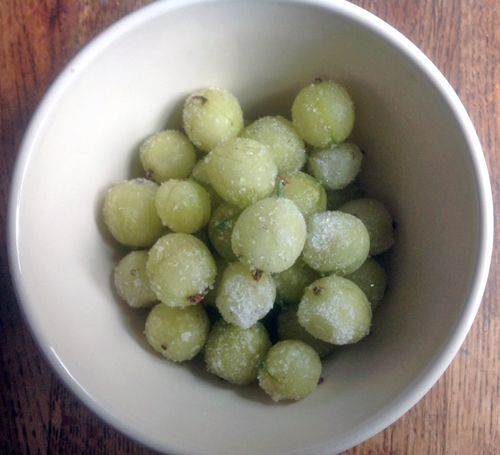 Without defrosting, put the green gooseberries in a pot, keeping the red gooseberries (+ loganberries/raspberries) in reserve.

Turn the heat on medium and stew the gooseberries until they have burst, mashing them a little to extract the juices. Continue cooking for about 2 minutes.

Turn off heat and press through a fine meshed sieve. Reserve the juices and pulp. Discard the seeds, skin & other solids. 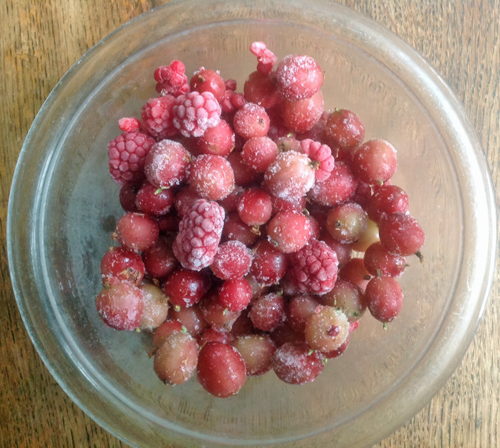 Now do the same for the red gooseberries, adding the loganberries or raspberries to make the juice. This will enhance the red color of the finished juice. Keep each batch separate – green and red.

Assemble all but the eggs into a saucepan and heat until sugar dissolves and the butter melts. Spoon a little of the gooseberry mixture into the beaten egg to temper – mix. With a whisk, beat the gooseberry mixture while pouring in the tempered egg. Continue to whisk until the egg has been incorporated and the mixture begins to thicken. Lower the heat and continue cooking and stirring for another 3 to 4 minutes for a smooth curd. While still hot, put it through a sieve to remove any bits of egg whites. The curd will get slightly thicker as it cools.

Place each of the curds in their own bowl. the curd should be at room temperature when making the fool. Whip the cream until peaks form. Divide the cream in half and fold into the curds. You will have two gooseberry creams – one pinky-red, the other pale yellow-green.

Carefully layer the green gooseberry cream into the bottom quarter of a tall stemmed glass. I used a piping bag which allowed me to easily reach into the glass interior. Follow this by the red gooseberry cream, then another layer of green, followed by the top layer of red.