What produces both a non-dairy milk and a non-grain flour? It’s not some kind of riddle, but a simple question with at least two answers that I can immediately think of: Almond and Coconut.

I finally decided to look into gluten free baking solutions – after reading so many posts out there on the subject. I am not gluten intolerant, nor is anyone in my family. We love bread, pasta, cakes and cookies made with wheat flour. However, I couldn’t resist the urge to experiment with different ingredients and experience new tastes and textures. But, first, I had to acquire those ingredients. The most obvious solution and easily obtainable was almond flour, which is essentially fine ground almond meal. But there was one big drawback – nut allergies. So…that leaves coconut flour. Despite the name, coconut is not actually a nut, but a member of the palm family and thus more closely to such fruits as dates. However, if you have nut allergies to contend with and are uncertain, it is always wise to check with your doctors before ingesting coconut.

The most economical way, I have found, to acquire coconut flour is to make it yourself. As a pre-processed commodity it is very expensive and often difficult to source. A useful byproduct is coconut milk. Or, conversely, the flour can be considered the byproduct of the milk production. The two products exist in a kind of symbiotic relationship – a two for one bargain!

Coconut Milk & Coconut Flour
Making coconut milk and flour is simple. The two ingredients below are all you will need. The amounts are proportional, making about 1 cup milk and 3/4 to 1 cup flour. To increase the amount, simply multiply both ingredients by the same amount (2 cups coconut to 3 cups water, 4 cups coconut to 6 cups water, etc.). It is best to use both the milk and the flour as soon as possible, but the milk can be frozen and the flour has a short shelf life, but can be keep for a short while before it starts losing its flavor.

Coconut Milk
Dried (desiccated) coconut shreds come in various cuts – from fine to coarse. I have found it best to use the fine shreds. If you can only fine the coarse ones, simply put into your food processor and process on and off until a fine shred is formed. Place the coconut shreds in a bowl and pour the boiling water over. Stir and let sit until it reaches room temperature (several hours).

Scrape everything into a blender. Blend for a few minutes. 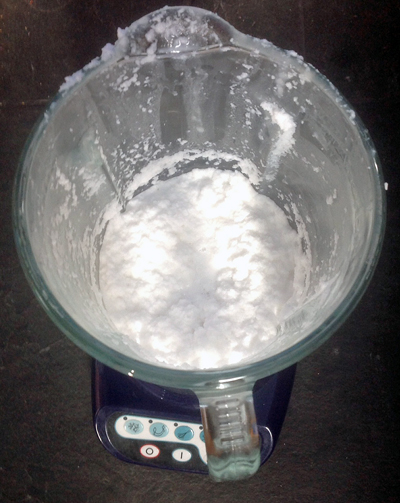 Meanwhile, line a colander with a fine mesh cloth. Pour the blended coconut liquid into the lined colander.

Gather up the corners of the cloth and squeeze out as much liquid as possible.

The milk can be chilled, sweetened and drunk or can be used in puddings or in your favorite Thai curry. The cream will rise to the top of the milk as it settles. Simply shake the bottle or stir to re-mix. 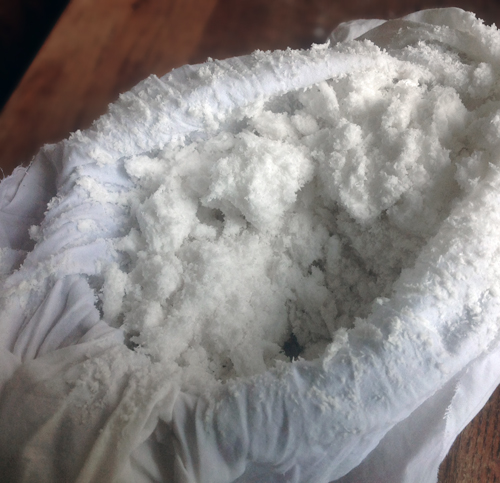 Save the coconut bits left in the cloth to make coconut flour. 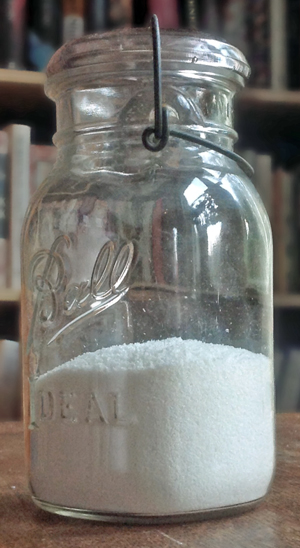 Coconut Flour
Preheat the oven to 200 degrees F. Take the pulp from making the coconut milk and spread it out on a baking parchment lined baking tray. Smooth it out to a thin layer, breaking up any clumps. 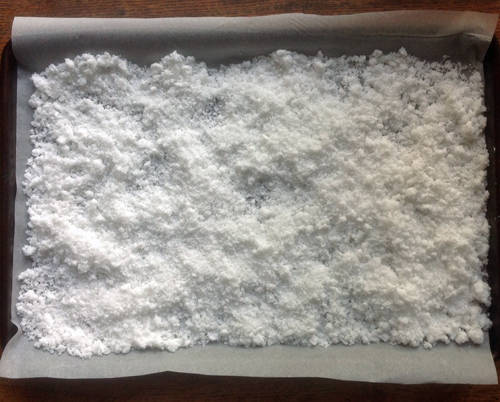 Place it in the oven for approximately 45 minutes until the flakes are dry. Turn off oven, remove the tray and fluff up the flakes. Replace the tray in the cooling oven until completely dry. When cool, put the flakes in the food processor to grind it to a fine powder. 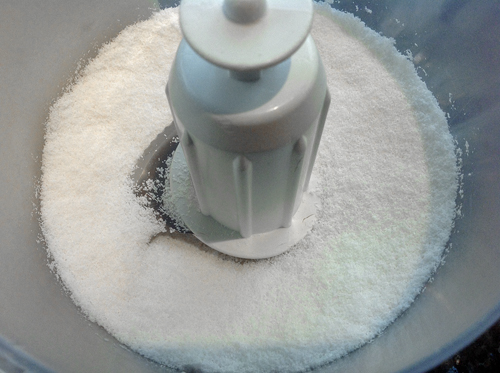 Store in an air tight container in a cool dry place. Do not compact.