Lovely word, šnicla. The Slavic caron, háček, inverted hat over the s immediately marks it as exotic. Phonetically šnicla uses the whole mouth to pronounce it – lips, tongue, teeth. It’s almost as good a word as schnitzel, which is the translation of Serbian šnicla. Pounded thin meat, sometimes filled and rolled, breaded and fried or baked, šniclas are typical of traditional Serbian cuisine. 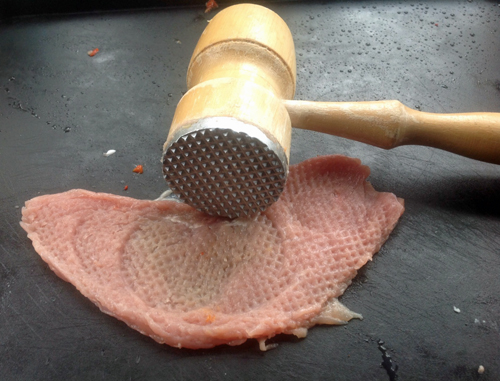 A friend of mine once described a pork dish to me – in mouth-watering gastronomic superlatives – that she and her husband enjoyed on one of their forays into Serbia. I should perhaps explain that these friends met at University in Belgrade back in the day when the country was still Yugoslavia. Now, they periodically visit, catch up with old friends and find every opportunity to sample the food they love, full of meat, peppers and creamy cheeses.

This is my interpretation of the dish my friend described, a kind of šnicla in that the pork is pounded thin, filled and rolled. However, it isn’t breaded and I’ve slow cooked it in my Balkan peka, my clay pot with the domed lid. The pot was made by a northern Greek potter who not only sources his own clay, but takes pride in reproducing traditional Balkan cooking shapes. Note the little “horns” on the ridged handle! It is similar to Römertopf pots which can be substituted – only remember to soak it before using.

And, I’ve got two more words for you – kajmak and ajvar. I’ve already posted on ajvar, the red pepper condiment of Southeast Europe, in my post Ruby Red Spread. Kajmak (sometimes spelled kaymak) is a kind of salty clotted cream from Serbia, Montenegro, Croatia, Bosnia, etc. – essentially from the same region as ajvar. Kajmak isn’t something you readily find on your supermarket shelves, so I’ve included two ways of producing something that resembles kajmak – see Cheat Kajmak below.

Slow Cooked Pork, Ajvar & Kajmak Rolls
These are pork šnicla – pounded thin pork leg steaks, smeared with ajvar and rolled with a portion of creamy kajmak in the center. The “sort of” in the title of the post pertains to the absence of breading and the slow method of cooking in the peka.

Preheat oven to 320 degrees F. Liberally oil the inside of your clay pot. Take the pork steaks (escalopes) and pound them with a meat tenderizer until very thin. 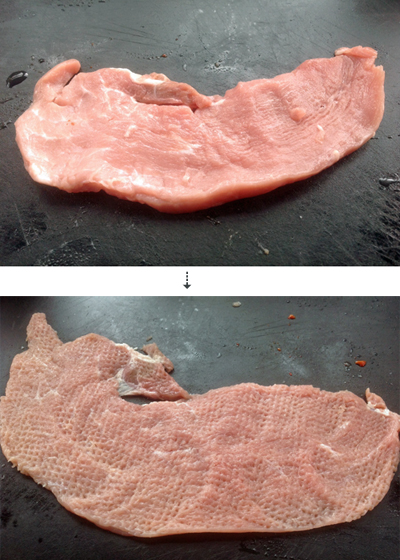 Smear about a tablespoon of ajvar on each pork steak. Put a dollop of kajmak at one end and fold the pork over. Roll carefully and loosely so as not to squeeze out the ajvar.

Do this with each of the pounded pork steaks and line them up in a single layer next to each other and fairly tightly packed in the clay pot. It does not require the addition of any liquid.

When you have finished with all of the steaks, smear the remainder of the ajvar on top, sprinkle with a little salt and dried oregano. 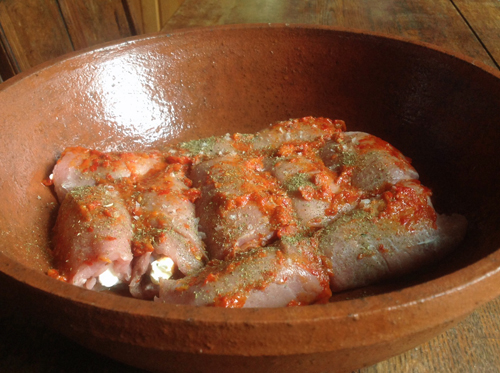 Place the lid on and cook in the oven for 2-1/2 hours. The kajmak will keep the meat moist, but may also produce a slightly curdled liquid. Lift rolls out with tongs when done.

Cheat Kajmak
These are two methods of producing a creamy spread that approximates a salty kajmak. Or…find the authentic substance in a food shop or one that specializes in Balkan products. Note that Turkish kaymak that I have found in our local Turkish supermarket seems to be slightly different – not salty and more like English clotted cream. These recipes make far more than you will need in making the pork rolls. Serve a little dollop of it with the cooked pork. It is also very good with baked potatoes, bashed new potatoes or simply on its own as a spread.

Cream the crumbled feta in a food processor or press it through a fine sieve. Mix with the cream cheese and sour cream until smooth.

Soften the butter and mash the cream cheese and butter together, sprinkle on the salt and mix in.