When I got to the checkout, I noticed that I had a large number of long, red Romano peppers in my basket. I know they aren’t in season. I also know that their carbon footprint isn’t a tiny one as the label said they came from Spain. But, they were on special and I couldn’t resist. And, since under the pile of peppers was a lone aubergine (eggplant, for you Americans out there), it could only mean one thing – I was going to make ajvar.

Ajvar is a ruby-red pepper spread that some say originates in Serbia. It is a common condiment in Balkan winter kitchens – a way of preserving the crop of peppers, an important element in traditional cuisine of the area. I love it simply as a spread or dip. It is also particularly good with pork.

A number of years ago, in a hot sweaty summer kitchen on the island of Crete, I made my first batch of ajvar under the expert direction of a Croatian friend. Since then, I have tried to keep her wise advice in mind whenever I make ajvar: not too smooth, as much olive oil as it takes, and above all patience. 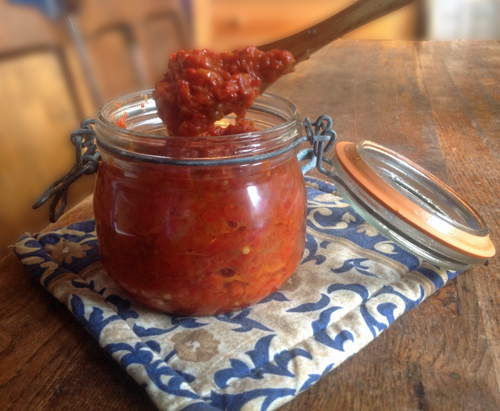 Ajvar
There aren’t many ingredients in ajvar – mostly peppers – but the secret to success is in the procedure. My friend uses lots of red pepper flakes – she likes hers very HOT! She also uses red wine vinegar, but I prefer the mellower balsamic.

Preheat oven to 400 degrees F. Rub olive oil over cleaned peppers and line them up in a large casserole. Clean aubergine and prick the skin with a knife. Put the peppers in the oven on the middle shelf and the aubergine directly on the racks below. Bake for 30 minutes. Remove peppers from oven, turn off the heat and leave the aubergine in the oven. 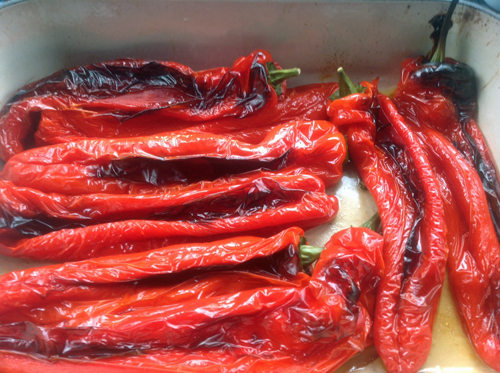 The peppers will have turned black in places and the skin split. While still hot, place these in a bowl and cover with clingfilm (= Saran wrap). Now wait, do something else, while the peppers cool and the aubergine continues to get soft in the cooling oven. In this way, slow cooking the the aubergine, it is soft without the smoky flavor it acquires when charred. The aubergine is there to smooth the texture, not to overpower the peppers.

When the peppers have cooled, peel the skin away – this should be easy as the skin has separated from the flesh. Scoop out the core and as many seeds as possible. Remove the aubergine from the oven and peel the skin away, leaving the inner pulp which should now be very soft.

Cut the peppers and aubergines into large chunks and either put through a meat grinder (as recommended by my Croatian friend) or “pulse” (that is, start-stop action) in the food processor. The object is to have a coarse ground mixture with some bits of pepper rather than a smooth paste.

Put the pepper/aubergine mixture into a large frying pan and add the crushed garlic and at least 2 Tablespoons of good extra-virgin olive oil. On a low heat, stirring frequently, sweat the liquid off, adding oil to be absorbed as you go. This is where my friend said not to be afraid and to keep adding oil “as much as it takes”. When the oil begins to separate, don’t add any more. 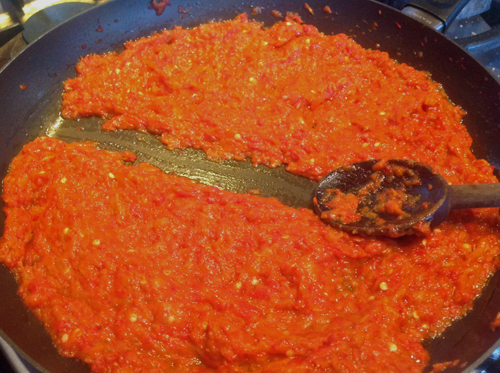 When the liquid has been cooked off enough, run the back of a wooden spoon down the center to produce a channel. If no liquid runs into the channel, it is time to add the pepper flakes if desired and the vinegar. Stir to incorporate and simmer a little further. Spoon into a clean jar, seal and refrigerate.