It’s amazing what you can create with three basic ingredients – flour, sugar and butter. Shortbread, generally associated with Scotland today, has a long evolution from its origins as a medieval “biscuit bread” – the twice cooked dry rusks made from leftover bread dough – to its present form as a sweet crumbly biscuit.

Sometime around the 16th century, the leavening agent in the medieval “biscuit bread” was replaced by fat (butter or lard) and became known as short cake. Since fat is a leavening suppressant in baking, it kept the pastry short. This terminology also shows up in shortcrust and the American term shortening.

There are still British regional traditions of short cakes such as Shrewsbury cakes made in Shropshire and Goosnargh cakes made in Lancashire. Of course, these British short cake biscuits should not be confused with American shortcake (as in strawberry shortcake), a confection created in the mid-19th century East Coast USA as a popular cake served at ladies’ tea parties.

During the 18th century, short cakes had a change of name, explained as a result of a tax dodge on the part of Scottish bakers to avoid the levy Parliament imposed on luxury goods such as cakes and biscuits. It’s a plausible story. Luxury taxes were introduced in the 18th century and the Scots are known for their frugality. 🙂 Put these facts together and you get shortbread! 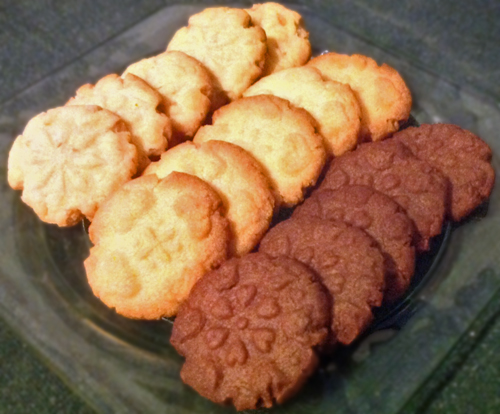 Flavored Shortbreads
I make many different flavors of shortbread around the holiday season to give as gifts to friends. Each year, I try out a few new combinations. Some really zing and some fall flat. The three I’m offering below are my tried-and-true shortbread variations, all sharing a basic mix of butter, flour and sugar. If you wish to reduce the amount of flour, many people substitute rice flour or corn flour (= American corn starch) for some of the plain flour – in various proportions up to a half and half mixture. Substituting can, however, change the texture, making it difficult to form the shape described below.

For each of the shortbreads, the procedure is the same. Place all but the flour into a mixing bowl and mix until the ingredients combine and become creamy. Add the flour a little at a time and continue mixing until it begins to clump. With a teaspoon, take some of the shortbread dough and roll into a small ball. It should be around the size of a walnut. Place on the baking parchment and continue until you have filled the tray, keeping space between.

With an lightly oiled cookie stamp (like those pictured below) or with an oiled flat bottom of a glass, press each ball down so that they are approximately 1/4 inch thick. The cookie stamp will impress a decoration in the biscuit. If you are using a glass to press your biscuit, use the tines of a fork or the tip of a spoon to create decorations. The blog British Food History gives an example of how to decorate shortbread this way. 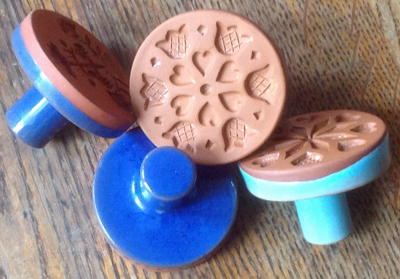 Some people sprinkle the shortbread with more sugar before baking, but I don’t. Bake for 12 to 15 minutes. Transfer to a cooling rack and store in an air-tight container once completely cooled.

This year I’m experimenting with a pistachio and dried cranberry combo (perhaps with a hint of cinnamon), a pecan-brown sugar mix that reminds me of pecan pies and a Nutella-like chocolate and hazelnut duo. Will keep you posted as to the results!

The Slow Food UK web-site
• A recipe for Goosnargh cakes

From British Food History blog:
• A detailed account of the History of Shortbread