Just to be clear, I’m referring to a tart from Georgian England – that period in time when the “Georges” were kings of Britain, from 1714 to 1830. Not the rouged, brazen and busty sort of tart that featured in William Hogarth’s satirical drawings from the same historical period. The subject of this post is a luscious, chocolatey dessert tart. Although, come to think of it, both sorts of Georgian tarts exhibit the typical indulgences of the time. 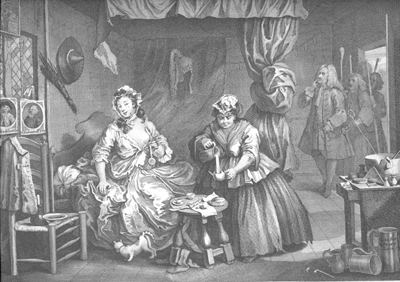 That flamboyant time is the focus of the British Library’s current exhibition, “Georgians Revealed”. It was a time of excess including rich foods and lavish meals. Notably, the British Library’s exhibition coincides with the recent opening of George III’s Royal Kitchen at Kew, that had been closed since the death of Queen Charlotte in 1818. (I’m already planning my visit!)

While looking around the web for more information on the palace at Kew, I found this “cook-along” video on YouTube direct from the Royal Kitchen. It takes you through the making of a chocolate tart served to King George III in 1789 and is a little over 5 minutes long – well worth viewing.

An authentic Georgian chocolate tart – how wonderful! It got me thinking of the Rococo chocolates on sale in the British Library in the “Georgiana” section of the shop with the books and other souvenirs highlighting the exhibition. Rococo, a luxury chocolatier based in London, is noted for its exotic flavor combinations and is named after the artistic and architectural style of the late Baroque, popular from 1730 to 1770 and noted for its “over the top” rich decoration (like cherubs & gilt) – a style that definitely appealed to the Georgians.

I chose to recreate my “Georgian” tart based on Rococo’s Earl Grey tea flavored dark chocolate. The decision was based on the grounds that the blend of Earl Grey tea, infused with oil of bergamot, was created sometime late in the Georgian period (although the actual tea maker, place and time are contested). 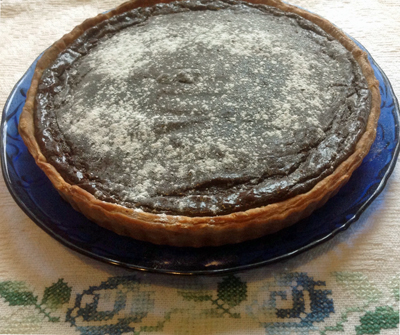 Earl Grey Chocolate Tart
One problem I encountered was how to infuse the tart with the Earl Grey flavor without using the expensive and potentially difficult to find Rococo chocolate. But, the problem was solved and the result is similar to the flavor of the Rococo chocolate bar, although a little more subtle. I also wanted to add a bit more orange flavor to the shortcrust pastry than the plain one described in the “cook-along” video.

Sweet Orange Shortcrust Pastry
You will need a 10 inch diameter, two-part tart pan and weights for baking blind. The best weights are re-usable ceramic or metal ones, specifically made for this purpose. If you don’t have the ceramic weights, you can use either dried beans or rice, but these will need to be disposed of when you are finished.

In a large mixing bowl, put the flour and pinch of salt; sift the icing sugar into the flour. Zest and juice the clementines. Set the juice aside and finely chop the zest. Add the zest to flour mixture and stir. Coarsely grate the frozen butter into the flour and mix with your hands. Slowly, one tablespoon at a time, add the juice. When the juice has been absorbed, add the beaten egg. Continue mixing with hands until a rough ball is formed. Flatten the ball and wrap in cling film (= American Saran wrap) and refrigerate for an hour or two.

Roll the dough out to a rough circle on floured greaseproof paper or baking parchment, approximately 12 to 14 inch in diameter. Rolling out on paper will make it easier to lift when you transfer it to the tart pan. Fit the dough into the tart pan and cut the excess from the edges. With the tines of a fork, liberally prick the bottom and sides of the tart shell. Cover the tart shell and place it back in the refrigerator for at least half an hour.

Preheat oven to 350 degrees F. When the tart has cooled and rested, uncover, then line it with baking parchment and add the weights. Bake for 15-20 minutes. Remove the weights and parchment paper and return to the oven for another 5 minutes in order to brown. This is called blind baking. Remove from the oven. It is ready to fill.

You can also find some good instructions and tips on blind baking from That Other Cooking Blog: http://thatothercookingblog.com/2013/11/06/apple-and-black-currant-tart/

Warm the milk in the microwave (1 minute on high) or on the stove top, making sure not to let it boil. Remove from heat, add the tea, cover and let it steep until the milk cools to room temperature. Remove teabags or strain the milk and discard the tea leaves. The tea infused milk will have turned an aromatic tea-brown. Pour into a large saucepan.

In a small bowl, put the corn starch and spoon a little of the tea/milk to mix into a smooth paste. Scrape this paste back into the infused milk in the saucepan and add the cream. Stir to mix. Heat on medium, stirring until the mixture thickens.

Finely chop the chocolate and set aside. Separate the eggs, putting the yolks into a bowl and setting the egg whites aside for use in another recipe. Beat the egg yolks and add in the sugar. When the creamy mixture has thickened, add a little of the hot liquid to the eggs, stir and then add the eggs to the pot. Heat on stove until the custard is quite thick. Remove from heat and stir the chocolate into the hot liquid. Keep stirring until all the chocolate is melted. It is now ready to add to the baked tart shell.

Bake for 20 to 25 minutes. Cool completely on a wire rack. When cool, remove the tart pan surround and put out on a serving plate. Dust with icing sugar (= American confectioner’s sugar), cut into wedges and serve. 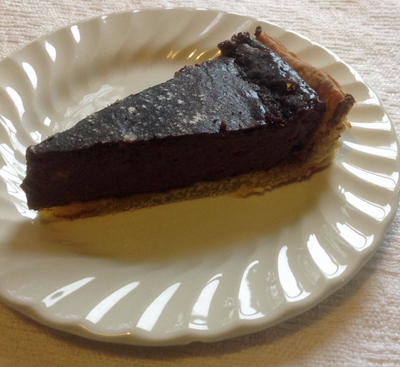 For authentic Georgian recipes have a look at a really wonderful blog The Cookbook of Unknown Ladies from London’s Westminster City Archives.

For a light, fun read have a look at The Cocoa Conspiracy by Andrea Penrose. It is a mystery (+ romance, spies and the Hell Fire Club) set in late Georgian times and includes historical facts on chocolate, plus recipes!