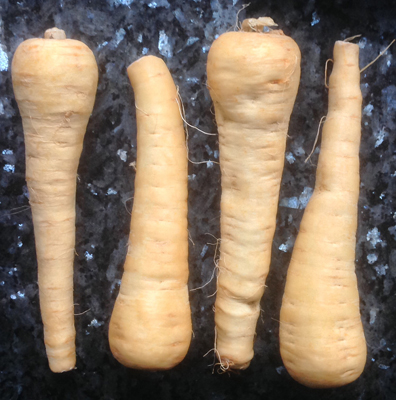 All too often, when a plate of roasted, creamy-white root vegetable is offered to our Greek and Italian friends at our dining table, it is met with perplexed looks. Since it would go against all of their instincts to rudely blurt out the question – “what is that?” – we’ve become adept at translating the puzzled looks.

“It’s parsnip,” we explain and describe the vegetable.

They process this information for a moment or two. Then their eyes light up with that eureka moment and they reply, “Ah, yes, white carrots”, obviously relating it something familiar. They’re not far off with their definition as parsnips are, indeed, botanically related to carrots – but more like cousins than siblings and certainly not as versatile since they cannot be eaten raw. But, once our guests have tasted the parsnips, they are hooked.

I find it odd that parsnips feature in ancient Roman and Byzantine Greek cookbooks, yet it is virtually impossible to find mention of parsnips in later cookbooks of traditional Italian or Greek cuisine. It seems that this humble root must have got a lot of bad press in Southern Europe since those early times – enough to wipe parsnips from collective memory.

I also read somewhere that parsnips were brought from Europe to the American Colonies, but their popularity rapidly declined and were almost completely overshadowed by the potato. I have no doubt they continued since that time to be grown and consumed in the USA, but it was not a vegetable found at our family table when I was growing up.

Parsnips are a beloved vegetable here in Britain, right up there with the other root vegetables – the turnip, the swede (American = rutabaga), celeriac, beetroot, salsify, Jerusalem artichoke and, of course, the more commonplace carrot and potato.

Like many of our Greek and Italian friends, I, too, had my first experience of the rich, sweet taste of parsnip here in Britain – in the form of a creamy spiced soup served by my future in-laws. I now cook (and eat) parsnips like a native. 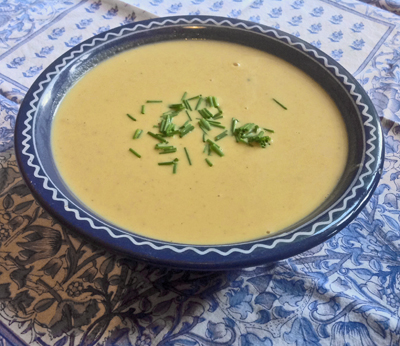 Curried Parsnip Soup
A retro recipe from my mother-in-law’s collection that she adapted from the cookery writer Jane Grigson – all the rage in Britain in the 1970. It’s best when made the day before.

Top and tail the parsnips. Peel and cut lengthwise in quarters. Remove the tough, fibrous inner core and cut into chunks.

Chop the onion finely. Melt butter in a stock pot on medium-low heat being careful not to let the butter brown. Sauté onions until they are beginning to be transparent. Add the minced garlic and the parsnip chunks.

Bring to a boil, turn the heat down to a simmer, cover and cook for 40 to 50 minutes until the parsnips are cooked and very soft. Purée the soup with a hand blender or in batches in a food processor.

Heat to a simmer, seasoning with salt if it is needed and freshly ground black pepper. Add the cream, stir and simmer for another 10 minutes, uncovered.

The soup is best when served the next day, allowing the flavors to meld and mellow. Refrigerate when cool. Gently reheat before serving. Serve in bowls with a sprinkling of chives or parsley. The contrasting flavor of Parmesan rolls make them the perfect complement to the curry spices of this soup.