A Sixpence, A Wishbone & A Thimble

Something to think about other than American Thanksgiving… It’s almost five weeks before Christmas – a day known as “stir up” day. This is when households traditionally make their Christmas puddings. Yet, by the number and variety  of commercially produced puddings even now lining the supermarket shelves, it appears that the widespread practice of plum pudding making at home has gone out of fashion. Instead of a laborious soaking, mixing, steaming process, the store-bought puddings require only a final re-steaming (or microwaving) to refresh them before the brandy is poured and the match lit…à la flambé.

Of course, that is if one does not choose an alternative such as panettone, pandoro, stollen and other seasonal goodies found stocked side by side with the plum puddings in the markets. 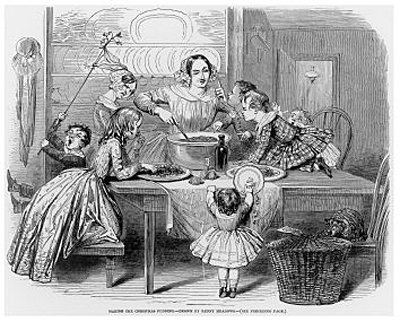 During “stir up” every member of the household was given the chance to stir the pudding – from east to west to signify the journey of the Magi. It was also at this point that the cook inserted coins and silver trinkets into the mix. Even a prayer for the activity was recorded in the 16th century Book of Common Prayer:

Stir up, we beseech thee, O Lord, the wills of thy faithful people; that they, plenteously bringing forth the fruit of good works, may by thee be plenteously rewarded; through Jesus Christ our Lord. Amen.

The practice of adding silver coins and charms, like many of other Christmas traditions, was popularized in the Victorian period. Each of the charms had a meaning. Of the more common ones, a sixpence or a thruppenny bit signified wealth, a wishbone indicated the granting of a wish, a thimble meant thrift, a boot indicated travel, an anchor promised safe harbor, and a bell, horseshoe or button equated good luck.

However, this tradition, like the pudding itself, harks back to earlier times when the idea of placing a coin or ring in a cake signified the selection of the Lord of Misrule (called the Abbot of Unreason in Scotland). Whoever found the token, regardless of social rank, was crowned the Lord of Misrule (still symbolized by the paper crowns found in that other British custom, the Christmas cracker). The Lord of Misrule has its roots in the ancient Roman pagan holiday of Saturnalia held in December when the social order changed roles – master to servant, servant to master. In medieval times the reign of the Lord of Misrule was often marked by wild parties that culminated in the Feast of Fools on New Year’s Day.

Now, if we follow the tradition of Christmas pudding (store-bought or home made), we may still insert coins  – cleaned and sterilized – into the finished product, warning all guests that a hard inclusion might be included in their slice. Despite this abbreviated and sanitized version of the tradition, the story of the Christmas pudding and its silver tokens is still richly steeped in history.

CONFESSION: I  have to admit after these remarks on the tradition of the plum pudding, that I do not make my own, nor does it feature at our Christmas feast. I have nothing against plum pudding – in fact, it has a wonderful dense, spicy richness. I do, however, succumb to panettone madness during December since I love its light fruitiness – half bread, half cake. And, I still make my own marzipan filled stollen. À chacun son goût.