It all started the day I spotted the lovely ham hock in the market. A glitch, an unforeseen problem caused a delay in the progress of reconstruction in our kitchen (see my posts Kitchen Archaeology and The Builders’ Cakes for more of the story). I was really hoping that my kitchen would be back in working order, but it was not to happen that day. Some excavation and concrete pouring was in order in one part of the kitchen while the cabinets, refrigerator and cooker were shrouded in dust sheets in the other part.

The question on our minds was “Do we go out to eat?” But, I thought, where would the challenge be in that? I have cooked in more difficult circumstances before. On one memorable occasion, during fieldwork an archaeological project in Southwestern Greece, I produced a meal with nothing but a single hot plate, a huge battered pot, a bunch of onions and a skinned (but not decapitated) rabbit given to us by a local village lady. Result: a yummy kouneli stifado (Greek rabbit and onion stew).

But, I now had a ham hock and a large 3.5 liter capacity crock pot (or a slow cooker as they are called here in Britain). I also had access to many pantry supplies piled up in my living room awaiting site completion before being reunited with their shelves and numerous perishable items in the spare refrigerator in the basement. Surely, I thought, it would be a doddle. Result: a spontaneous – slow cooked – soup. 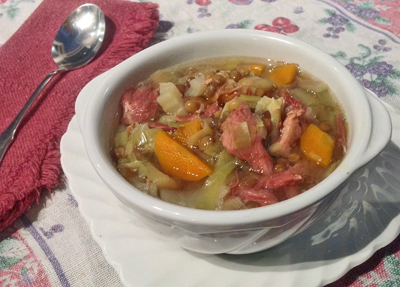 Ham, Lentil & Vegetable Soup
The way this chunky meat and veg soup came together reminded me of that lovely children’s story based on an old folk tale, Stone Soup, that I used to read to my son when he was little. The soup is made in two stages – first the stock and then the soup.

To make the stock, first clean the ham hock under running water. Place the cleaned ham with the bay leaf, crushed juniper berries and water in a covered crock pot and cook on high heat for approximately 4-5 hours. I started early in the morning and the stock was done and the meat beginning to fall off the bone by early afternoon.

Remove the ham hock from the stock and let it cool slightly until you can flake off the pieces of meat and cut into small pieces. Skim off any scum from the surface and sides of the crock pot. Return the meat to the stock and discard the bone, cartilage and fat. Add a little more water to the stock if it looks like it has reduced significantly.

Clean your leeks by cutting them lengthwise and running cold water over them to remove any dirt and grit. Finely chop the leeks. Peel and chop you carrot into small half moon pieces. Shred cabbage. Core and peel the apple; cut it into small chunks. Add the vegetables and the apple to the stock. Make a paste of the dry mustard with a bit of stock and add this to the crock pot. Stir to mix. Lastly, sprinkle on the Puy lentils. Put the lid on, turn the heat to the low setting and let it bubble away for the afternoon – about 4 -5 hours.

Check for seasoning and add salt and pepper if needed. Serve with crusty bread.