In an earlier post, I mentioned that I have a Brown Turkey fig tree growing in my garden. It was planted over ten years ago in an oak half barrel and placed in a sunny, sheltered spot on our back patio – ideal conditions for figs, even in Northern England. Most years I normally harvest about a half dozen or so ripe figs before weather conditions shut down the plant and the fig divests itself of it’s leaves. This year, however, the tree had a significant growth spurt in early spring and by September I was harvesting dozens of ripe figs. 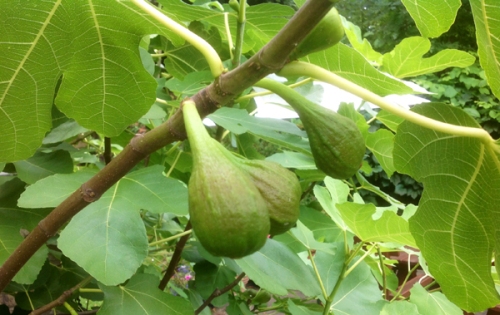 I gloated over the wonderful haul, thinking of all the fabulous things I could make with them – jams, tarts, prosciutto wrapped and stuffed with Gorgonzola, or simply puréed and metamorphosed into fig gelato. But, fig heaven was short lived. I was brought back down to earth when we discovered that the bottom of the oak barrel had rotted out and the moisture greedy roots had managed to find their way through the crevices of the paving stones.

So…we now have one surgically pruned fig tree recovering from its trauma in a new roomier pot.

Since it was unlikely that I would get another bumper crop for some time, I made the most of the figs I had harvested: lemony fig jam, a few tarts and some whizzed in the blender before freezing the luscious purple-pink pulp for future gelato. The fig jam recipe came from the Italian Dessert Recipes blog. Although, since I can’t resist tweaking, I decreased the amount of sugar and increased the amount of lemon juice and added the zest. The figs were sweet enough. Oh, yes, instead of adding pectin, which figs need in order to gel, I used a particular British commodity – jam sugar that has pectin already added.

Click on the label for the recipe from the Italian Desserts Blog.

It’s great simply on toast or paired with cheese. With a little bit of kitchen experimentation, and keeping with an Italian theme, I came up with a fig jam crostata. I called it the Fig Newton Crostata after those soft fig-filled cookies of which my grandfather was so fond. Despite some ribbing and silly suggestions from my family, I resisted calling it the Flies’ Cemetery Crostata after the Scottish nickname for a dried fruit slice similar to the Fig Newton.

Fig Newton Crostata
The Sweet Pastry is based on Tessa Kiros’ pasta frolla for her apricot jam crostata, in Twelve: A Tuscan Cookbook. This recipe also works well with plum jam and I have even made it with quince jam.

Put flour, butter, sugar and lemon zest in the mixer. Mix until the mixture looks like coarse crumbs. Add 1 egg plus 1 egg yolk and mix until you get a smooth, soft ball of pastry. Place on floured surface and divide in two, creating smooth balls which you then flatten slightly with your hand. Wrap in greaseproof paper or waxed paper and store in the refrigerator for at least an hour before until you are ready to assemble and bake. The pastry can be frozen at this point and defrosted before use.

Taking one disk of dough, cut off 1/4 and reserve for the lattice top. Roll out dough to 10 inch rough circle. Spoon on the jam and smooth it in the center (1/2 cup each crostata), an inch all around the edge. Brush beaten egg on pastry around the edge.

Roll out the 1/4 reserved dough and cut into 6 equal strips. Using your hands, take each strip and roll until it is approximately 8 inches in length and flatten slightly. Arrange 3 strips horizontally and 3 vertically, weaving up and over alternately to form your lattice. Brush the lattice carefully with egg. Using the baking parchment, lift the edges over the center, pinching where it naturally folds. Brush the pastry with egg.

Repeat this process with the second pastry disk. Bake for 30 minutes or until golden. Cool completely, cut and serve.