I used to love those days in the Wisconsin countryside when we’d stop by a farmer’s road-side stall and load up on freshly picked corn. I even loved the chore of shucking – peeling back the husks, revealing the rows of plump yellow kernels, painstakingly picking off the pesky, clingy corn silk.  But, nothing was better than biting into fresh cooked sweet corn on the cob drenched in melted butter.

Eating corn on the cob always reminds me of an embarrassing gastronomic experiment in my childhood. One long-ago Halloween I actually tried to eat tough field corn, little knowing that it is primarily used as livestock fodder. With the wisdom of hindsight, I realized that the field corn had been illicitly acquired by the neighborhood boys from a nearby farmer’s field. They, no doubt, intended to scatter the kernels as part of the “trick” in trick-or-treat. Not for human consumption!

Corn on the cob is fleetingly found in the supermarkets here in Britain. It is often pre-shucked with its ends trimmed, looking absurdly naked in their plastic wrap. It does not have the tender, near melting qualities of American sweet corn.  This is probably  due to the different growing conditions or possibly the  particular cultivar farmers use here.  Although, in all fairness to British corn on the cob, it is still very tasty.

So, to make the best of the short British season of fresh sweet corn on the cob, I make chowders or simply cut off and freeze the kernels (so much better than canned or those big bags of frozen). 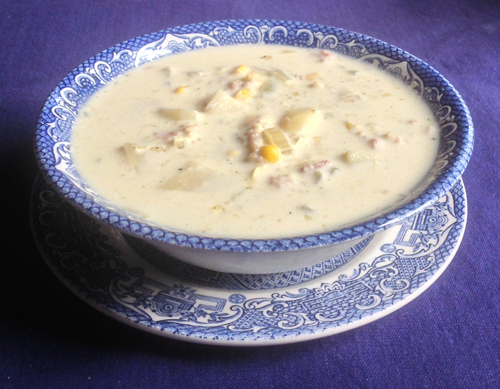 Creamy Corn Chowder with Bacon
This soup uses the whole ear of corn – cob and kernels, making use of all that lovely milky, flavor-packed starch that oozes from the cut cob.

First cut the corn from the cobs, placing the kernels and any juices aside in a bowl in the refrigerator while you make the stock. Crack the cobs into pieces and place them in a large saucepan with the water. Bring to a boil, reduce heat and simmer, partly covered, for 1 hour.

Meanwhile, cut the bacon into small pieces and finely chop the onion. Peel and cut your potatoes into small cubes and chop the celery into small pieces. Chowders traditionally consist of chunky bits, all a similar size. However, it is impractical to cut potato cubes down to the size of a corn kernel. The potato cubes, like the celery, should not be over-large (1/2 inch or less).

When the stock is done, strain the liquid and reserve, discarding the cobs.  You should have about 3 cups of corn-enriched stock.

In a stockpot, fry the bacon in oil until it begins to get crispy. Add the onion and sauté until it is translucent. Put in the potatoes, celery, corn, milk and the reserved stock.  Bring to a light boil, turn heat down low and cover. Leave for about 20 minutes or until the vegetables are tender.

Season with salt and pepper. Add cream and bring back up to heat. Ladle this chunky soup into bowls and serve with crusty French or Italian bread.